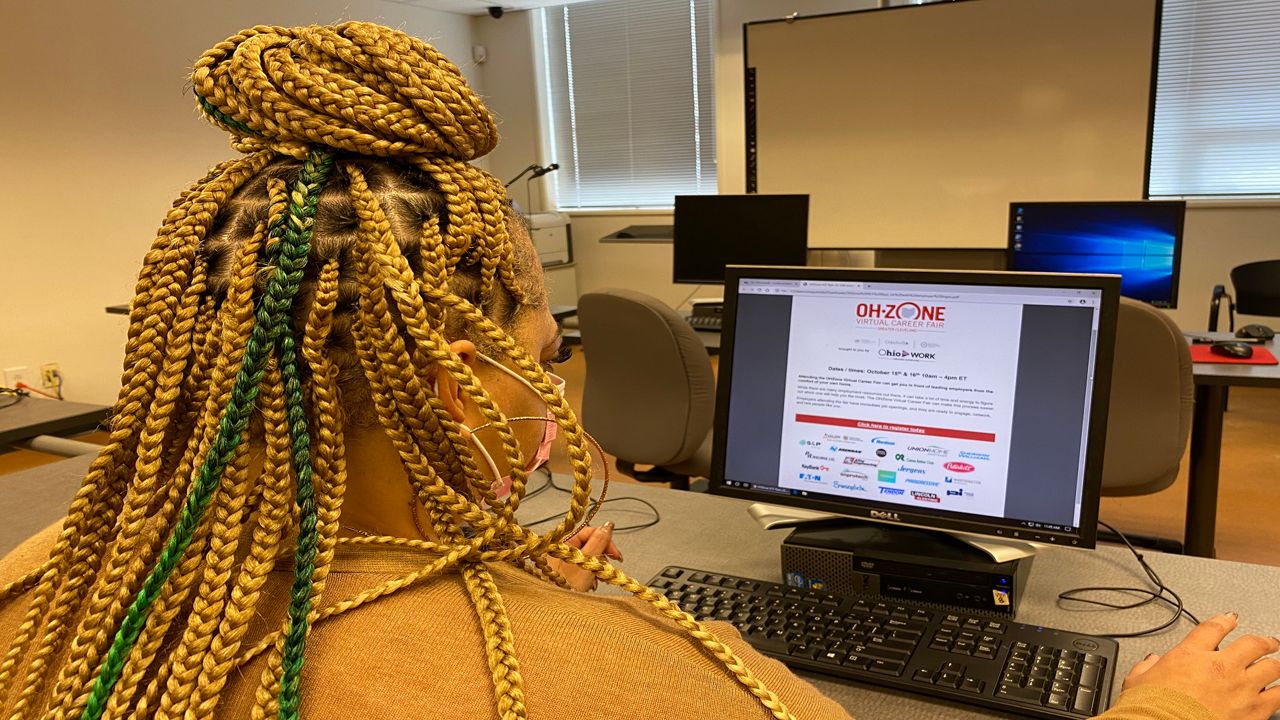 CLEVELAND, Ohio — The pandemic continues to put people out of work.

Ohio unemployment numbers have been hitting record highs since March.

That’s why this week, a virtual career fair is kicking off, thanks to the “Ohio to Work” initiative through the governor's office.

Partners include OhioMeansJobs, Goodwill Industries, and the Urban League of Greater Cleveland.

The experience in Cuyahoga County will serve as the pilot to the program before it's likely extended to serve the rest of the state.​

Right now, 30 companies are participating in the "Ohio to Work" initiative, looking for candidates to fill about 1,000 job openings.

This is the first time in a long time Michelle Rondo has put herself first. The 48-year-old has an adult daughter she raised on her own. Now, she’s a grandma, too.

“Kind of like my time now to be able to do a bit more since my daughter is older, she has her family now. So, now it's time for me to try to do things to better myself. Maybe get a higher paying career, things like that, finally get that house built,” said Rondo.

Last year, Rondo had a kidney transplant. Prior to the surgery, she was working in the hospital setting and she was concerned about her health and safety working in that environment post-recovery during the pandemic. Now, she’s using her unemployment as a chance to find a new career.

“It's exciting to know that I have the potential to go ahead and further my education if I want to, get better credentials,” said Rondo.

Rondo hopes to break into the tech industry with the help of "Ohio to Work."

“Today we’re announcing a new initiative that will help Ohioans who are looking for a job, to have a better chance at finding that job. This new program brings together employers, nonprofits, educators, training providers, to help Ohioans re-skill and restart their careers,” he said at his briefing on September 15.

When Rondo heard those words from Governor Mike DeWine, she immediately looked in to how she can get involved. Now, she has a coach at The Urban League of Greater Cleveland who is guiding her through the whole process.

“It gives you a lot of hope of what you can do and they're so positive and upbeat and make it so you only can feel the same way,” said Rondo.

For over a century, The Urban League of Greater Cleveland has worked to empower African Americans by providing services like education and workforce development.

CEO and President Marsha Mockabee says the COVID-19 crisis has caused an alarming unemployment rate among African Americans in the Cleveland area.

"The unemployment rate is high and particularly in the African American community. It's in double digits, you know, it's in 20 percent and higher, and each month we see it rising. And so clearly we see it as a state of emergency, and one that we absolutely want to help to be a part of the solution and the connection to,” said Mockabee.

Interim CEO of OhioMeansMobs in Cleveland-Cuyahoga County Frank Brikner says since the start of the pandemic, over 190,000 people have filed for unemployment locally.

That’s why “Ohio to Work” is so critical.

“It enhances, you know, and amplifies what OhioMeansJobs does. I mean one of the things that we'll be able to do was we will get more information about job seekers on the front end so we can do a better job to connect them to an open position. It will help us train additional individuals in careers that will hire. So those are two win-wins right there,” said Brikner.

The virtual career fair is from 10AM to 4PM Thursday and Friday. You can register the day of.

“I think this virtual career fair is something that everyone will want to register for because the jobs on here are outstanding. These are not jobs that you just see anytime just hiring,” said Rondo.

Again, "Ohio to Work" is a pilot program in the Cleveland and Cuyahoga County area. State organizers say once the pilot is completed and reviewed, the goal is to expand the program to other parts of the state.