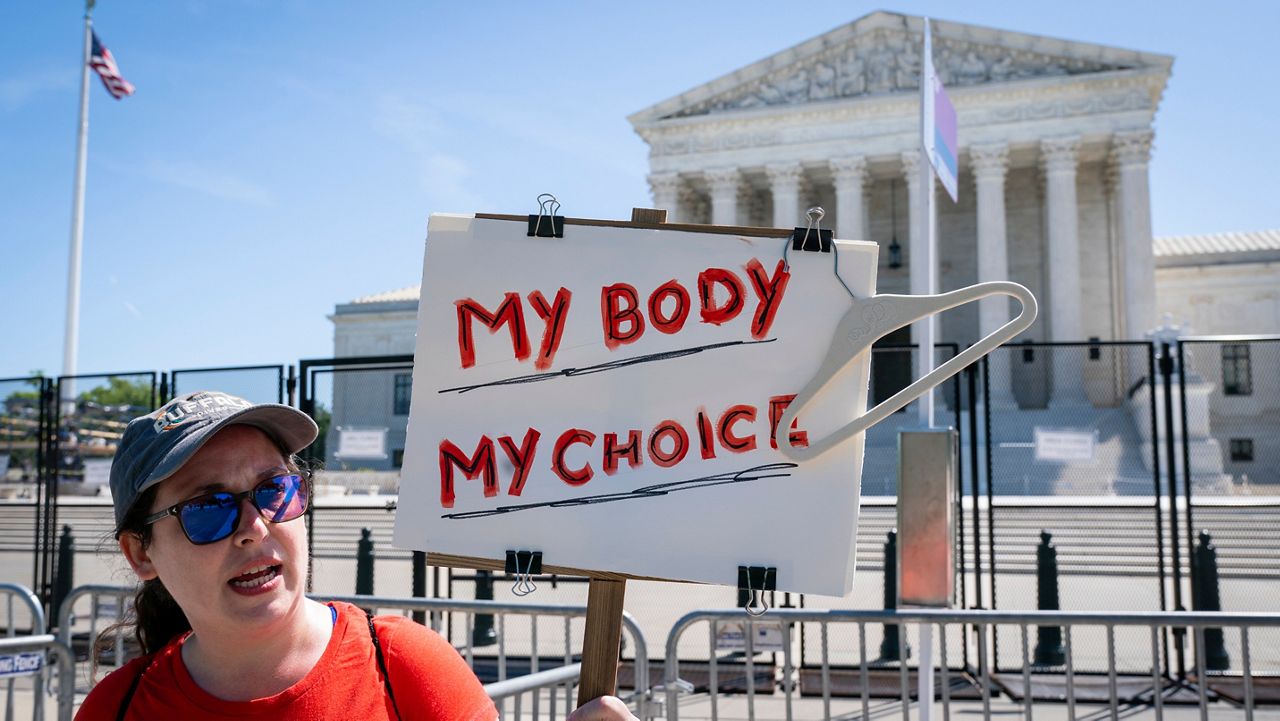 Michelle Peterson, of Silver Spring, Md., protests outside of the Supreme Court, Tuesday, May 10, 2022, which is lined with anti-scaling fencing in Washington. "Don't mess with stay at home moms," says Peterson, on her decision to protest today. (AP Photo/Jacquelyn Martin)

A bill codifying the right to an abortion failed in the Senate on Wednesday after every Republican senator and Democratic Sen. Joe Manchin of West Virginia voted against the measure.

The final vote was 49-51, far short of the 60 votes needed to overcome the legislative filibuster threshold.

The move comes in the aftermath of the leaked draft opinion published by Politico that shows the Supreme Court is set to overturn Roe v. Wade, the 1973 decision that guaranteed the right to an abortion.

"Once again – as fundamental rights are at risk at the Supreme Court – Senate Republicans have blocked passage of the Women’s Health Protection Act, a bill that affirmatively protects access to reproductive health care," President Joe Biden said in a statement after the vote. "This failure to act comes at a time when women’s constitutional rights are under unprecedented attack – and it runs counter to the will of the majority of American people."

"Republicans in Congress – not one of whom voted for this bill – have chosen to stand in the way of Americans’ rights to make the most personal decisions about their own bodies, families and lives," he continued, without mentioning Manchin, the lone Democrat to oppose the bill.

While the bill was not expected to pass, it forced Republican lawmakers to cast a difficult vote on the hot-button issue of abortion ahead of November's midterm elections, especially with polls showing a wide majority of Americans oppose the Supreme Court overturning Roe v. Wade.

Democrats and abortion rights advocates are hoping to make the issue a central focus of the midterm elections in a year that appeared to be perilous for the party, while Republicans have largely tried to steer clear of wading into abortion politics.

"To protect the right to choose, voters need to elect more pro-choice senators this November, and return a pro-choice majority to the House," he said, before pledging: "If they do, Congress can pass this bill in January, and put it on my desk, so I can sign it into law."

The president pledged that his administration "will not stop fighting to protect access to women’s reproductive care," as did Democrats in leadership.

"We will continue to defend women’s constitutional rights to make private reproductive choices as recognized in Roe v. Wade nearly half a century ago, and my Administration will continue to explore the measures and tools at our disposal to do just that," he concluded.

"I am angry and I’m disappointed," said Washington Sen. Patty Murray. "And I’m here to tell you that what we saw today is Republicans telling Americans all over this country and women in particular, that their voice is more important than yours. That what they believe in is more important than your choice about your own body and your own family and your future. I say to women across America, like me and so many others, now is not the time to back down or sit down. Now is the time to lift up our voices and fight back. And that’s exactly what we’re going to do.”

“Today, Senate Republicans lined up in lockstep behind Mitch McConnell and Donald Trump to vote to rip away the Constitutional right to health freedom from American women across the nation," House Speaker Nancy Pelosi, D-Calif., said in a statement. "While Democrats are fighting to enshrine Roe v. Wade into law, Republicans remain fully committed to punishing and controlling women’s most personal health decisions."

“In this fight, the rights of women – and of all Americans – are on the line," she added. "Democrats will never relent in defending our fundamental freedoms – and the American people will remember who has sought to punish and control women’s decisions and who has fought tirelessly alongside them when they cast their ballots this November.”

Vice President Kamala Harris, who presided over Wednesday's vote, said afterwards that "sadly, the Senate failed to stand in defense of a woman's right to make decisions about her own body."

"Let's be clear: The majority of the American people believe in defending a woman's right her choice to decide what happens to her own body," Harris continued. "And this clearly suggests that the sadness is not where the majority of Americans are on this issue."

"It also makes clear that a priority for all who care about this issue should be to elect pro-choice leaders at the local, state and federal level," she added. "Because what we are seeing around this country are extremist Republican leaders who are seeking to criminalize and punish women for making decisions about her own body."

A number of House lawmakers marched to the Senate ahead of the vote to demonstrate in favor of abortion rights, highlighting the heightened tensions in Washington surrounding the issue of abortion.

We marched to the Senate to demand they codify Roe because women should be able to make their own health care decisions.

We marched because a right-wing court shouldn't be able to take away a fundamental right.

We marched because we must never go back— the time to act is NOW. pic.twitter.com/76xoy96UGF

Majority Leader Schumer last week called it one of the the "most important" votes the body will take this year because "it deals with one of the most personal and difficult decisions a woman ever has to make in her life."

"Every member of this body will make a choice: Vote to protect the fundamental rights of women across the country or stand with five conservative justices ready to destroy these rights in one fell swoop," Schumer said Wednesday.

"What this all comes down to is a fundamental question: Who is making these personal decisions, politicians or a woman?" said Minnesota Sen. Amy Klobuchar.

But Republicans criticized the vote, saying it was just for show.

"This isn't the first time our friends across the aisle have tried to opportunistically capitalize on events to check items off their liberal wish list," said Texas Sen. John Cornyn.

The Women’s Health Protection Act, which passed the House of Representatives in September of last year, needed 60 votes in order to advance in the Senate – an unlikely proposition in an evenly divided chamber. The bill would guarantee the right of a patient to access an abortion, as well as protect the right of a health care provider to administer abortion services.

Despite McConnell's claims about public opinion, it should be noted that numerous polls say that a majority of Americans are opposed to the Supreme Court overturning Roe v. Wade, and several polls suggest that about 60% of Americans support Congress passing a law to establish abortion rights nationwide.

A procedural vote on the measure failed earlier this year in a 46-48 vote, with West Virginia Sen. Joe Manchin, a Democrat opposed to abortion rights, joining every Republican Senator present in voting against the measure. Sen. Richard Blumenthal, D-Conn., the bill's lead sponsor in the Senate, has modified the legislation to appease some moderates, but it was not enough to sway Manchin's opinion, or that of Sens. Lisa Murkowski, R-Alaska, and Susan Collins, R-Maine, two Republican lawmakers who support abortion rights.

Manchin, who cast the final vote Wednesday, said that while he would support a codification of Roe, this bill goes too far – meaning that a bipartisan group of lawmakers will vote to defeat the measure Wednesday afternoon.

Collins, who expressed disappointment with the leaked draft opinion, told reporters last week that she will not support the Democrats' bill, arguing it's too broad and "doesn’t protect the right of a Catholic hospitals to not perform abortions," which she argued "has been enshrined in law for a long time."

“There is nothing in this measure that detracts in any way from existing protections based on conscience or religion," Blumenthal argued in response to Collins' comments. "It doesn't mandate that a hospital or a doctor or any other provider do anything that is against religious principles."

Collins and Murkowski have authored a competing abortion rights bill, the Reproductive Choice Act, which is more narrow than the Women's Health Protection Act, but would codify Roe and the "undue burden" protections from 1992's Planned Parenthood v. Casey. Their bill would include exceptions for moral or religious objections.

After raising alarm with comments that it is "possible" Republicans could push for a nationwide abortion ban should they retake control of the chamber, Leader McConnell sought to downplay those remarks, saying it's highly unlikely they'd garner the 60 votes necessary to overcome the filibuster, and he would not change the filibuster rule "for any subject."

But Democrats are trying to sound the alarm on those comments anyway, with the hopes of putting Roe v. Wade on the ballot in November's midterm elections, which seemed precarious for the party prior to the leaked draft opinion due to rising inflation and relatively low approval ratings for President Biden.

Biden called on Americans to elect "more pro-choice Senators and a pro-choice majority in the House to adopt legislation that codifies Roe," and Schumer called Wednesday's vote "one of the most important votes we take in this chamber in decades."

"Americans strongly oppose getting rid of Roe, and they will be paying close attention from now until November to Republicans who are responsible for its demise," Schumer said on the Senate floor ahead of the vote. "So, to my Republican colleagues who have spent the last week trying to talk about anything other than Roe, it's time to go on record. I ask my colleagues to think carefully about their vote, and to reckon deeply about the consequences of a world where Roe is a thing of the past."