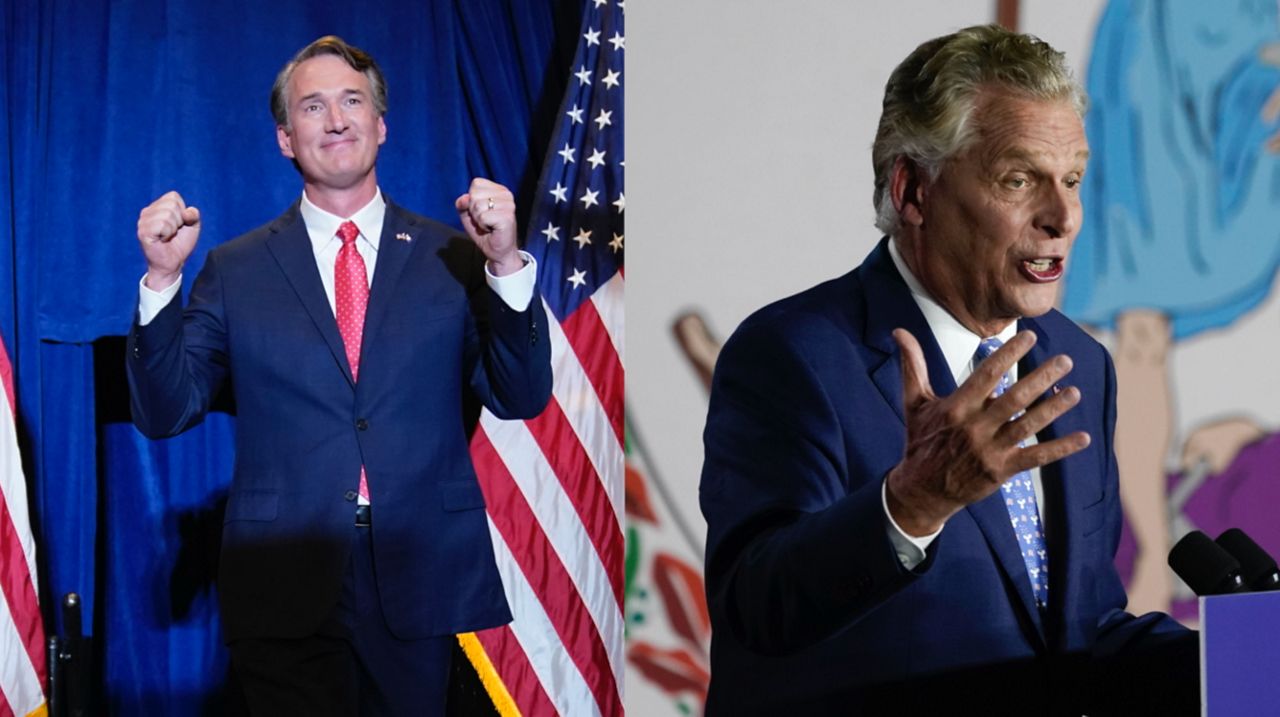 WASHINGTON, D.C. — Republican Glenn Youngkin beating Democrat Terry McAuliffe to become Virginia’s next governor has left Ohio U.S. Senate candidates Jane Timken and Morgan Harper confident about the state of their campaigns, even though they are in opposing parties.

“I think that it was a resounding rejection of the Democrat policies,” Timken, a Republican, said in an interview on Wednesday.

Earlier in the day, Harper, a Democrat, told Spectrum News, “The results in Virginia show that we can't keep playing the same old game here, the old playbook is not working.”

Harper is a progressive attorney who is running as a fresh face for Ohio Democrats.

She feels McAuliffe is like her Democratic primary opponent, northeast Ohio Congressman Tim Ryan — career politicians her party should shift away from.

Harper pointed to several young and diverse Democrats who won races for mayor across Ohio on Tuesday — Justin Bibb in Cleveland, Aftab Pureval in Cincinnati, and Sharetta Smith in Lima — as proof that candidates like her can succeed.

Harper also said she feels her party can only win over voters if they pass legislation like President Joe Biden’s economic agenda, which has been stalled for months in Congress.

“We have to be offering people a tangible vision and delivering results that are going to improve their lives,” Harper said.

Timken is one of six Republican candidates for Senate in Ohio and she’s one of the five campaigning on a pro-Donald Trump platform.

Even though Youngkin kept Trump at arms length in his race to avoid alienating some moderate voters, Timken said she feels combining Youngkin’s focus on education with Trump’s agenda will help her succeed next year.

She told Spectrum News that she has no second guesses about embracing the former president.

“That America First agenda where we had energy independence, a strong border, strong foreign policy, record low unemployment, these are all the accomplishments of President Trump under his leadership,” Timken said. “And these are the policies that quite clearly the American people want back.”

How Youngkin balanced embracing Trump but also keeping his distance has political watchers fascinated. But it’s worth noting that Trump lost Virginia last year, while he won Ohio.

“If Democrats are going to suffer any difficulties in Virginia and New Jersey, that just makes Ohio that much taller a task for them to handle,” said David Niven, a professor of political science at the University of Cincinnati.

Niven said Ohio Democrats have to figure out how to win over voters in suburbs and rural communities, something McAuliffe struggled to do in Virginia.

He told Spectrum News that getting Biden’s infrastructure agenda across the finish line would be a good place to start.

“They're not going to win a cultural argument, ever, in most of Ohio,” Niven said of Democrats. “They have to win it on doing actual things.”

Ryan, the congressman running against Harper, tweeted Tuesday night that the election results in Virginia, New Jersey and beyond were “a warning, but nothing is set in stone.”

In a statement to Spectrum News, his spokesperson said Wednesday that, “Last night is proof that Tim’s relentless focus on the issues that matter most to working people makes him the strongest candidate to flip Ohio’s Senate seat.”