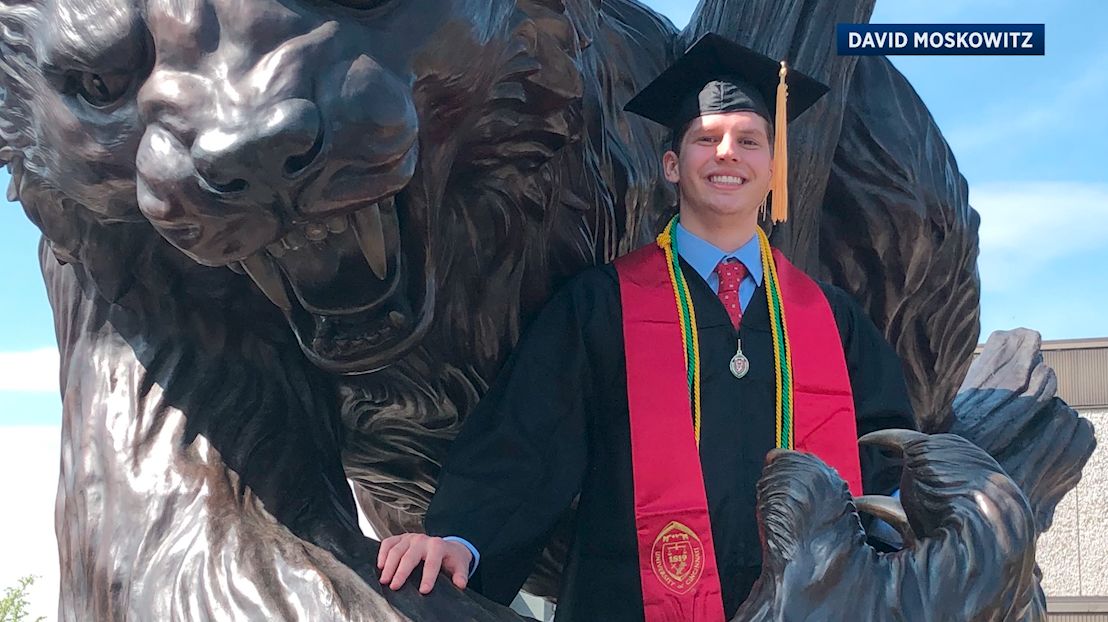 CINCINNATI — David Moskowitz said he has mixed emotions when it comes to sharing his journey over the past four years.

“It allowed me to grow as a person but was definitely a tough time in my life,” said Moskowitz, about his battle with pediatric stroke.


But it has all has come full circle in recent months, as the pediatric stroke survivor was recently hired at Cincinnati Children's Hospital Medical Center as a Pediatric Intensive Care Unit Nurse..

“Working as hard as I can in my PT and OT, it just doesn't make sense how it was possible, but I managed to do it," said Moskowitz. "And I have an absolutely crazy story to share that blows people's mind and it also inspires others."

One morning in Dec. 2017, the healthy 17-year-old senior at Sycamore High School, woke up to feel his lips tingling, and throughout the day that feeling progressed up the right side of his face... but he thought nothing of it at the time.

But after lacrosse practice, when the feeling continued, he consulted family, who immediately took him to Cincinnati Children's Hospital.

MRI testing revealed Moskowitz suffered a stroke, had an inoperable brain malformation, or AVM, and was diagnosed with a rare genetic disorder called HHT.

Moskowitz spent 25 days in the ICU receiving treatments, including radiation, but had trouble speaking, moving and lost some of his vision.

“What David went through was quite scary. He went through some dramatic events, not even within weeks, but within hours. Every change was real concern for life threatening,” said Dr. Sudhakar Vadivelu, a neurosurgeon and Moskowitz's surgeon.

Several months later, under the supervision of Vadivelu, Moskowitz was on the road to recovery.

His health battle would lead to an outpouring of support at his team's lacrosse matches and on social media with the hashtag, #DAVIDSTRONG.

Moskowitz said it took him a full year to get back to normal, but over the next four years, with a healthy mind, body and spirit, he earned a bachelor’s degree in nursing at the University of Cincinnati.

After a Co-op at Cincinnati Children's pediatric intensive care unit, fate would intervene.

“It's cool to see a role model for me in the ICU and a guy who took care of me in my darkest days. And now he's with me in my better days and we get to work together," said Moskowitz. "So it's an awesome experience."

Moskowitz said he will continue to increase pediatric stroke awareness in the future through community events.

“To see someone like David, who has a life-changing event, and then turn around and wants to be a health care provider themselves, that means the world,” said Vadivelu about his new co-worker.

Moskowitz said he wouldn't be where he is today without a close support team.

“I was a cocky 17-year-old, and I learned very quickly that I would have never made it through that experience without the support systems that I had, my family, my friends, and the community being by my side," he said. "I love patients that I can connect with and just go through a shift and know that I created a bond with someone and made their day a little better when they're facing those dark times."

Editor’s Note: A previous version of this article incorrectly listed Moskowitz as a pediatric cancer survivor. It was edited to reflect the correct illness. (11/14/22)