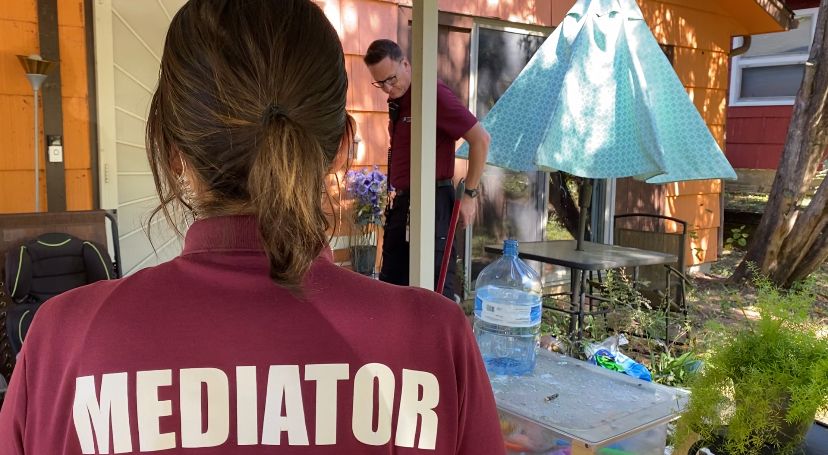 It's not just officers, but mediators taking to the streets to get to some 911 calls. (Spectrum News/ Sheena Elzie)

DAYTON, Ohio  — Along with police, mediators are hitting the streets to take some 911 calls.


If one were to call 911 in the Dayton area, it might not be an officer who shows up. Non-emergency mediators from the city’s new Mediation Response Unit like Josh Bedink and Raven Cruz Loaiza may respond.

The mediation crew takes low-level 911 calls. They are the first mediation team ever to go to a scene on their own, armed with nothing but a two-way radio.

“I mean, I think this button here (on the radio) we have a button here on our side. if we didn’t have the minute we hit one of those buttons, everybody in the DPD,”Loaiza said.

The team said they’ve taken close to 700 calls since they started back in May. Many of the calls are in response to mental health issues, noise complaints and neighbor complaints.

They said the reason they show up is not to ticket or arrest anyone, but to prevent that from happening.

Many of the calls they respond to, they leave the scene after handing out a pamphlet for more resources and filing a report. It’s all an effort to de-escalate conflicts.

“Just not having a badge and a gun already de-escalates the situation quite a bit,” Loaiza said.

The trained mediators are out when calls are at their peak in the daytime on weekdays.

“We’re showing up in the spirit of how can we help you in that situation and that immediately de-escalates,” Bedink said.

They’re in the process of expanding the team to go to more low-level 911 calls instead of police.

“Our focus is on people in conflict… without weapons,” Loaiza said.