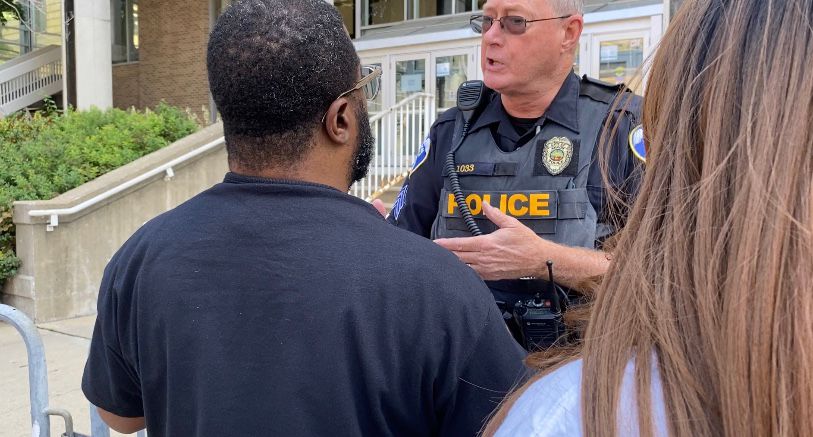 AKRON, Ohio — Akron-based activist group The Freedom BLOC is hosting its “Justice for Jayland: Week of Action” this week in honor of Jayland Walker, who was shot and killed after running from his car during a police chase in June. It's a week of events that include political education, leadership development and civic engagement.


On Wednesday afternoon, a group of protesters marched through downtown Akron to the police station to deliver a petition.

Ray Greene Jr., executive director of The Freedom BLOC, said the petition was signed by 58,000 people on the Color of Change website.

The petition called for police accountability and transparency in the Jayland Walker investigation. The petition also called for an end to police using tear gas and rubber bullets on protesters, among other things.

“Coming down here to talk to our chief and deliver 58,000 signatures, that shows that no one wants police to be chasing people in cars and no one wants armed militia pulling people over for broken taillights and things like that,” Greene said. “We have to start thinking about a different way of keeping our community safe, through investment and not police.”

Greene and other activists were hoping to hand deliver the boxes containing the signatures to the Akron Police Chief Steve Mylett, but were unable to enter the Justice Center to do so.

Spectrum News 1 reached out to the Akron Police Department to see if the petition was received and got a response from a spokesperson that said they are currently looking into it.

“We just want to have a conversation and I want the community to know where your [the police chief] office is at, they pay you,” Greene said. “This wasn’t about intimidation or anything. This is just about bringing the people and getting them intimate with the things that their tax dollars go towards.”

Greene said the “Week of Action” will continue throughout the week and will consist of political education, leadership development and civic engagement.

The Freedom BLOC said it has recently registered 9,000 Summit County residents to vote.

“Bringing people together, have community conversations,” said Greene. “Allow us to get to know our neighbors more. That way we can fight for one another more.” ​