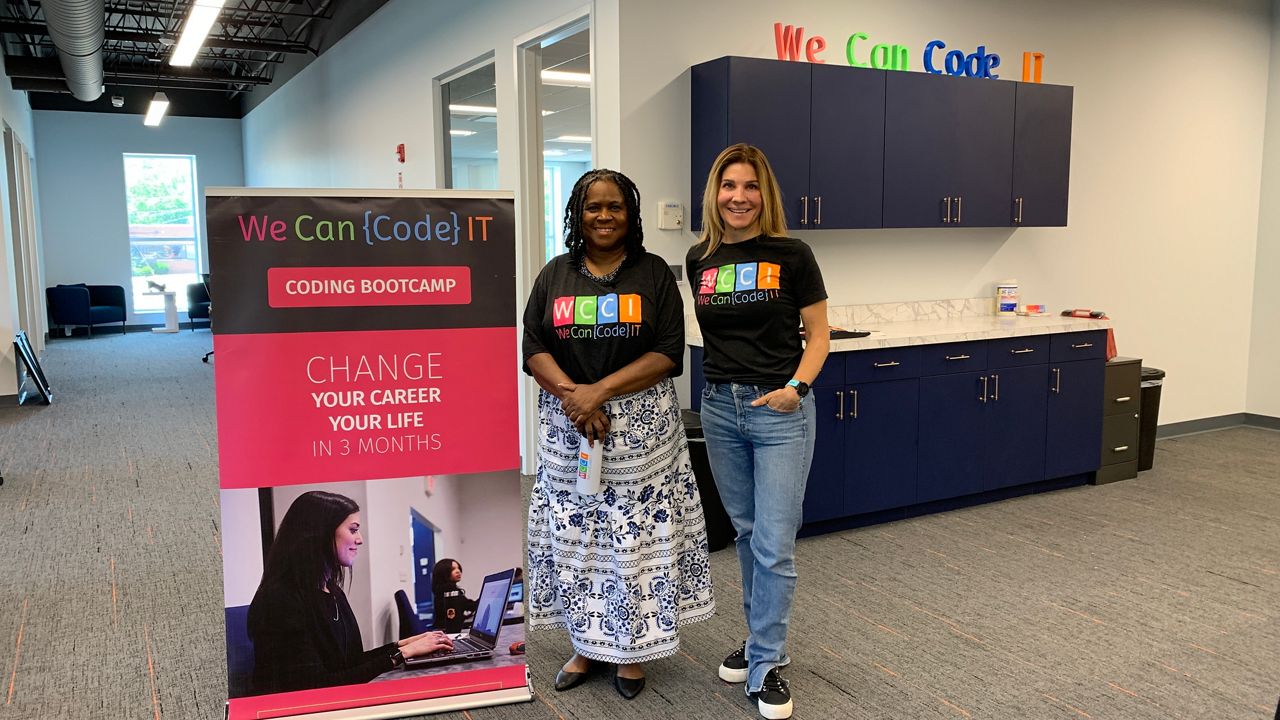 Mel McGee, founder and CEO of We Can Code IT with Rose Holmes-Minton, a 2021 graduate of the coding boot camp. (Taylor Bruck/Spectrum News 1)

OHIO — Technology can be intimating, but to Mel McGee, it’s not so scary now that she can speak its language.

“So computers are not smart. Computers know nothing,” said Mel McGee, the founder and CEO of We Can Code IT, a coding boot camp started in northeast Ohio. “They're just a series of light switches in a sense. Programmers learn how to use programming languages to tell computers what to do.”

McGee became interested in computer science at a young age.

“My dad bought a Commodore 64 computer, and I fell in love with it,” she said. “And I thought no one listens to me. I'm this little kid, but the computer did, and it excited me about computer science.”

Imposter syndrome stopped her from pursuing her undergrad in computer science.

“When I went back to college, I went to a computer science classroom and no one, no one looked like me,” McGee said. “I felt so out of place.”

She ended up getting another job that she said she hated, but then eventually gave it another go.

“I went back to night school and started computer science again and found my tribe, fell in love,” McGee said. 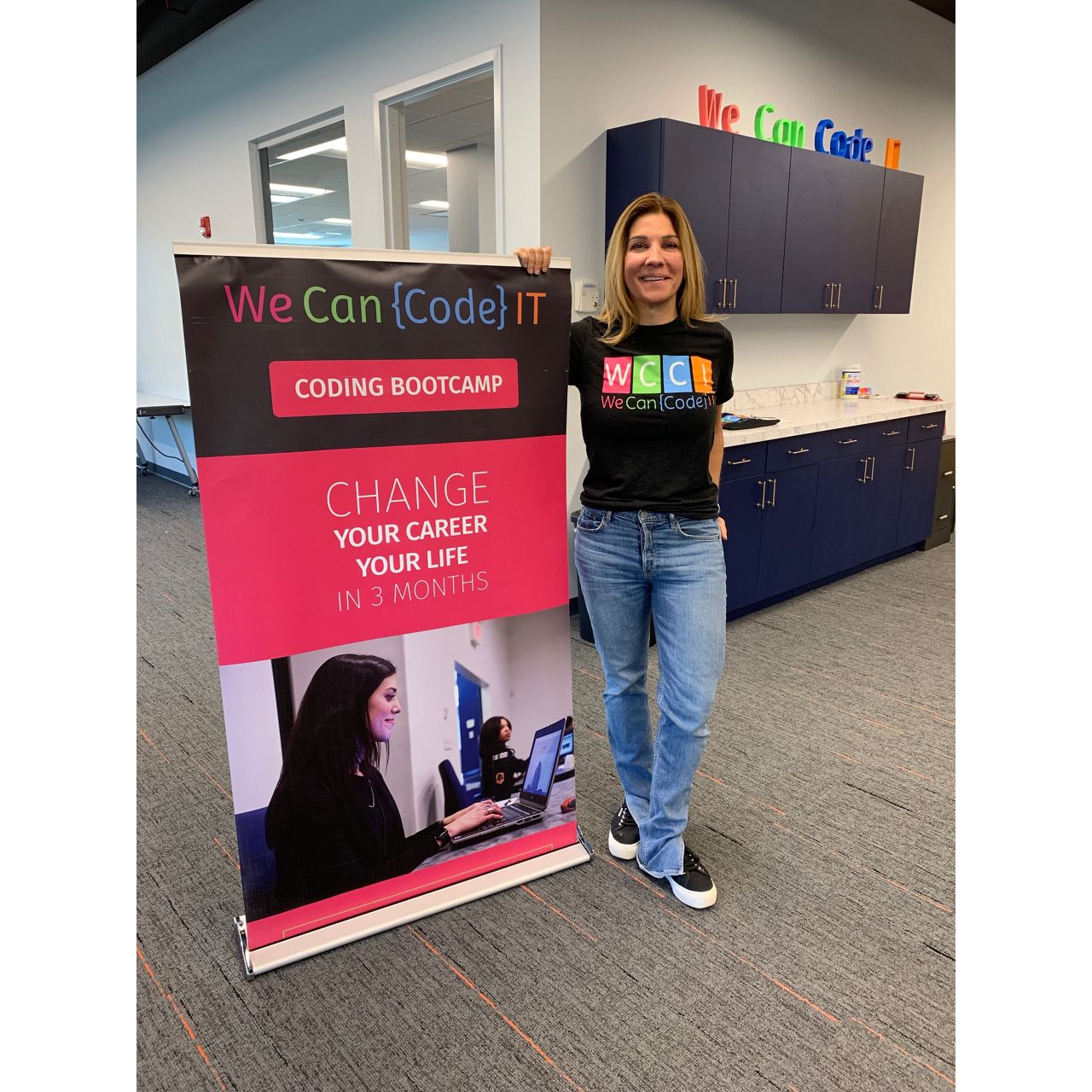 Mel McGee, founder and CEO of We Can Code IT. (Taylor Bruck/Spectrum News 1)

While she’s always had an interest in computer science, her other interest has been teaching. In 2015, she merged her two passions and created We Can Code IT, a coding bootcamp designed to help people, specifically women, start careers in software and web development. The boot camp is becoming increasingly important as the job market becomes increasingly high tech. Research shows that by 2030, more than 73 million jobs in the U.S. could be replaced with automation and computers.

“I want to show women that they can do anything," McGee said. "This is super important, because right now, the jobs that women typically hold are being replaced. Our jobs are being replaced by what? Robotics. If you look at a lot of customer service jobs, retail jobs, you're seeing fewer and fewer people. Self check ins, at hotels in Vegas, think about grocery stores—there are fewer and fewer clerks. Even Uber drivers won’t have a job in a few years, right? It's going to be replaced. Jobs are being replaced by robotics because people want automation, you want to save money. It helps the workforce, but unless we learn the skills we need to fill these jobs that are replacing ours, we're going to be lost.”

We Can Code IT’s mission is championing social equity through technology. The mission stems back to that moment in undergrad when she felt like she didn’t belong. Her goal has since been to bridge the gender and race gap in the tech programming industry. 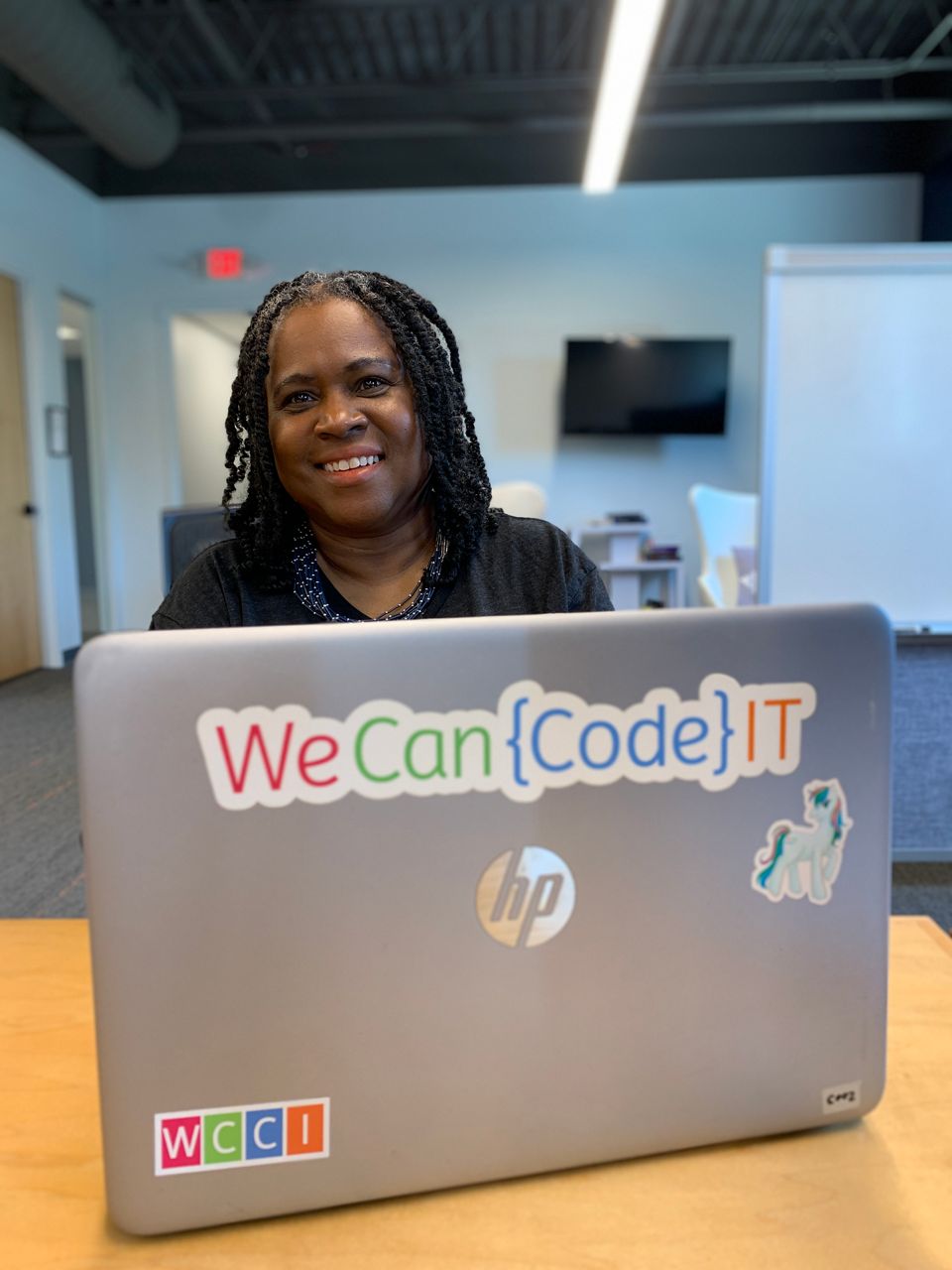 Rose Holmes-Minton, a 2021 graduate of the We Can Code IT boot camp. (Taylor Bruck/Spectrum News 1)

Rose Holmes-Minton, a recent graduate of the We Can Code IT bootcamp, was a college professor for 17 years. She’s now 65-years-old and is making a career change. At first, imposter syndrome scared her away from the industry, too. A large majority of software developers are men and white.

But she changing those statistics.

“I think before I did have a little bit of that impostor syndrome, thinking, 'Oh, ... I'm older. No one's gonna listen to me,'" she said. "'I'm a woman. No one's gonna listen to me, even after being successful in a career feeling that way.' But now I feel like, 'Hey, I’ve got something to offer.' You just have to be a little assertive, show what you have to offer and get it done.”

The boot camp is offered in-person as well as virtually and has grown to reach people nationwide. By 2030, McGee wants 70% of her graduates to be from underrepresented groups in tech.

“It is not easy. It's not for the faint of heart," she said. "You have to be that special kind of person to come and want to do this, and to be successful at it. After that, we're going to work with you to help you set yourself up for a great new career in tech. Women should want to be in coding because it's a wonderful career. You have many opportunities to work from home. If you have a family and have other obligations, as many women do, it's a way to balance your obligations and to create a balanced lifestyle.”

Women used to be a majority

McGee said men currently dominate modern computer science jobs, but it wasn’t always that way. Before personal computers came out in the mid 1970s, almost all coders were women. When personal computers started showing up in U.S. homes, McGee said they were mainly advertised and marketed to men and boys, thus the idea that computers are for boys became a narrative. McGee is working to flip that script back.

She said technology will rule the future, and with one graduate, which she calls “champions” at a time, she’s helping women and minorities not be left behind.

“Seniors can do anything, Black folks, Hispanics, people from all walks of life,” Holmes-Minton said. “One of my dearest friends in the class, the We Can Code IT class, is a Muslim woman from Africa who has four children, and so it's very traditional. She has to take care of those four children. Sometimes her mother-in-law comes to visit, and she has to take care of her and she's doing it. So if she can do it, I can do it. You can do it.”

We Can Code IT offers full-time and part-time programs. The boot camp is for people 18 years and older who have a GED or a high school diploma. We Can Code IT also works with community partners and has a lot of programs and scholarships that can help people afford the coding boot camp. To register for upcoming boot camps, you can visit here.