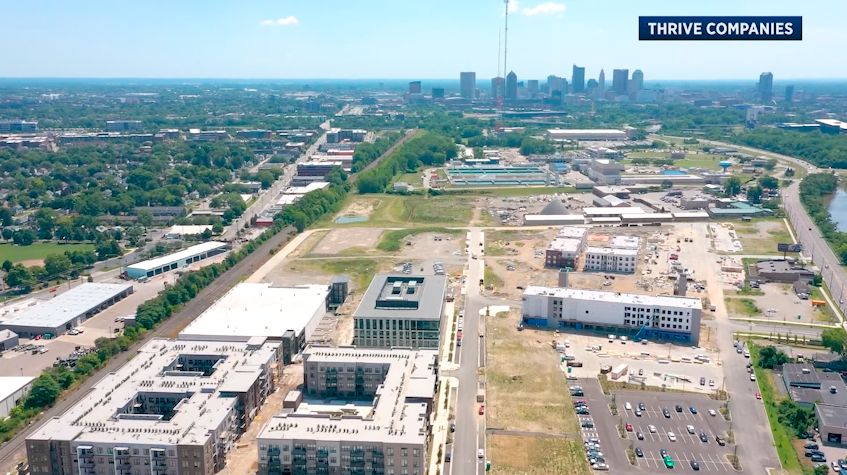 Thrive is one of the companies that received a grant to help clean up brownfield sites. (Courtesy of Thrive)

Developer continues to 'Thrive' with help of brownfield grants

GRANDVIEW HEIGHTS, Ohio — Columbus native Joel Lilly is the principal and CFO of Thrive Companies, a mixed-use developer with a focus on Brownfield sites, or land that has previously been developed but is not currently in use.


Thrive sees Grandview Crossing as one of its success stories. The development sits on 55 acres near Dublin Road, the site of a former landfill that took several years to clean up.

Lilly said it's all about doing your due diligence before taking on projects of this size.

“All the infrastructure work, all the grading work, clearing work, so these projects take a lot of time, a lot of work, versus a lot of the small one-acre sites where you can kinda get your hands around it," said Lilly.

Although there have been some setbacks with COVID and supply chain issues, Lilly is finally seeing the progress he's hoped for since 2012.

“One-thousand and three hundred apartment units. We have about 100,000 square feet of retail that is under construction and or planned. Plus we hope to have a 140-key hotel,” said Lilly.

The Grandview Crossing project was made possible in part by brownfield grants from the state of Ohio.

“The brownfield grant and the stormwater loan with the hot water department authority were critical for us to get those dollars to help us. It's a large site, had no utilities installed in it. And in order to make the vertical projects work, we really needed those funds to help get the project started,” said Lilly.

Lilly said while Thrive Companies has been hit hard by inflation just like everyone else, he's hopeful with the demand that exists in and around central Ohio, that they'll be able to continue financing and building for years to come.

“It's been a long time coming but we feel like we're on the top of the hill and getting ready to go down the easy side of this project as we continue to build out. We're really excited for Columbus, Ohio. We think we're really bullish on Columbus over the long term. We think there's a lot of job growth and retention. And we're excited about this project and our other projects that we're doing in the city,” said Lilly.

Lilly expects all phases of the Grandview Crossing project to be complete by 2026.

His team is also working on developing a former landfill on McKinley Avenue along the Scioto River in Columbus.

That project is expected to break ground next year and is funded in part by Ohio's brownfield grants.