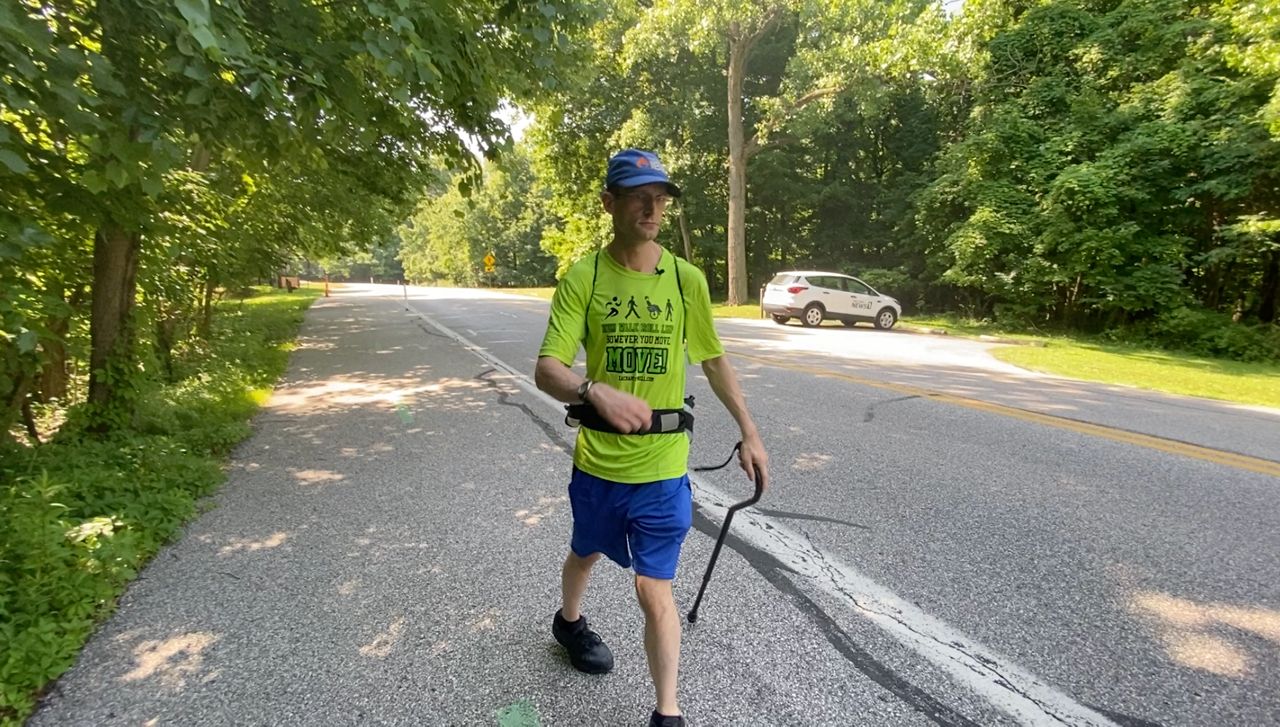 Zachary Fenell has participated in multiple marathons and has also found a passion as an author. (Ryan Schmelz/Spectrum News 1)

CLEVELAND — An Ohio man with cerebral palsy is on a mission to motivate others to ask "how" and not "what."


It’s another day of training for Zachary Fenell. He hit the ground running and knows there’s no where else he’d rather be.

“It’s me, my feet and the path ahead, and it tunes out all the noise of the world, and there’s just so much negativity in the world right now,” Fenell said.

Fenell’s disability hasn’t stopped him from walking and running mile after mile. He actually sees it as a fun challenge. He called the challenge it creates "Cerebral Palsy Ninja Warrior," a take off of American Ninja Warrior.

“It adds a layer of challenge, and instead of seeing it as difficult, I see it as a challenge to me,” said Fenell.

The Cerebral Palsy Vigilante is using his experience to motivate others. He’s written a book called “Slow and Cerebral” about his experiences. He’s hoping to get the word out that a disability shouldn’t stop you from achieving your goals.

“I want people to see themselves in me and connect, and it doesn’t have to be a marathon, but at the end of the day, I want them to pursue the unreasonable in their own lives,” said Fenell.

Having any disability can come with its share of challenges. Fenell said CP did impact his self-esteem growing up. His mother, Terri Fenell, said he still found ways to persevere.

“He had a drive, he had a personal drive and he has a lot of inner strength," she said. "And when I say inner strength I don’t necessarily mean a physical strength, but just that strength to be who he is and to share that with people."

Fenell works at the library in South Euclid. When he’s not at work or training, he’s running CP Chat Now through Twitter. CP Chat Now is an online community where those with CP can talk about any obstacles they have, from surgeries, to even dating. Fenell said it not only allows him to motivate others, but also motivate himself.

“They're expressing their gratitude in return kind of cycled back to me, and I was using those comments to motivate myself to keep going with the thought process that it’s not just about me doing this and finishing,” said Fenell.

The impact stretches far beyond Ohio. Devin Axtman is one of those who’s connected with Fenell through CP Chat Now. Despite living all the way in Texas, he said the group's impact has allowed him to find more understanding and support.

“We kind of just talk about various different things in life," Axtman said. "So it can just be, ‘hey, I had this random medical thing happen. Does anyone have any advice?' His passion for giving back to others and wanting to include others.”

As the Cerebral Palsy Vigilante, Fenell said he will continue moving in the right direction. He said he’s hoping to be an example that with the right attitude and work ethic, anything can be accomplished.

“I really hope people will learn to ask 'how' and not 'what,'” Fenell said.