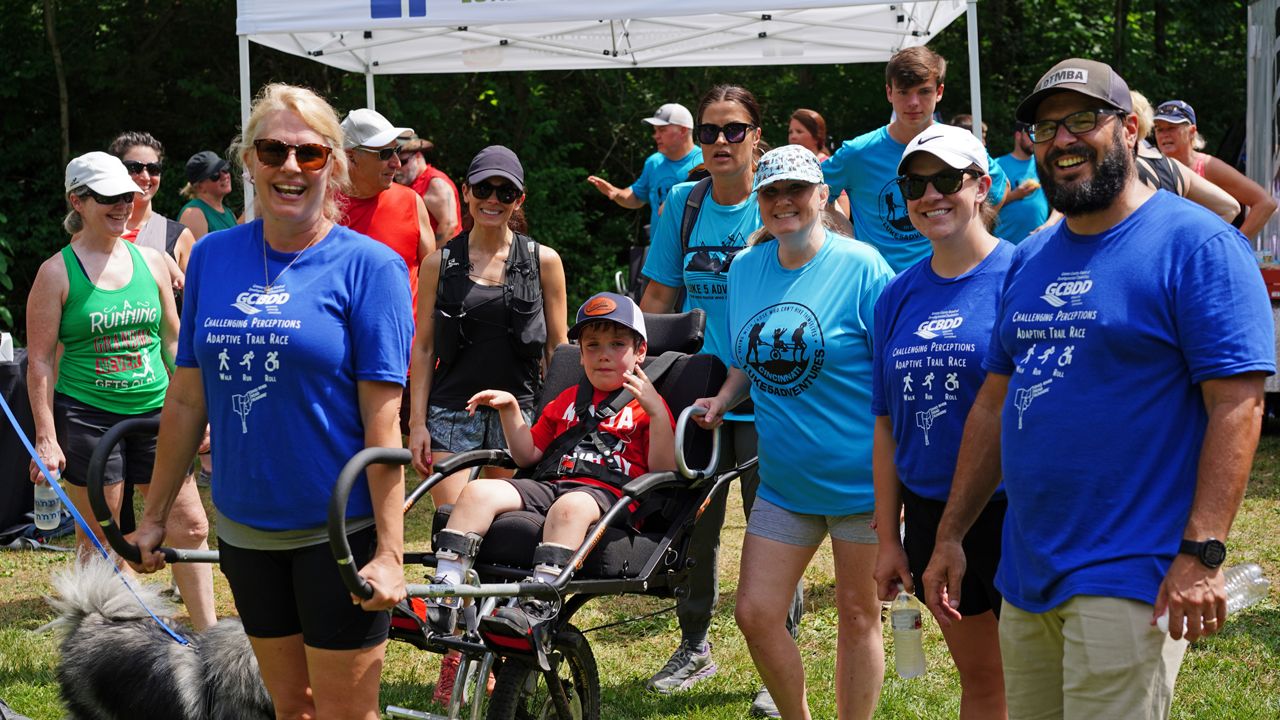 WAYNESVILLE, Ohio — People of all abilities took part in an off-road race in Caesar Creek State Park near Waynesville. It’s the first Challenging Perceptions Adaptive Trail Race - part of a larger program called, “All Hands In.”

“Our vision of All Hands In is to plan and coordinate integrated events so our folks with developmental disabilities can participate in with the general community,” said Josh Welhener, Transition Coordinator with the Greene County Board of Developmental Disabilities and the founder/director of the race.

Welhener approached the Ohio River Runners Club for help in staging the race and he recruited volunteers who helped people who would have trouble walking or using a wheelchair on a trail, like Beniah Lawrence. Volunteers and Beniah’s parents took turns pushing him in a special wheelchair adapted for rough terrain.

Like a several participants, Beniah brought along parents, grandparents and even the family dog to be part of the race.

"I know how important that is for Ben and his development,” Lawrence said. He works as a nurse practitioner and all too often sees young people who are shut in all day playing video games and have developed a fear of being outdoors and in the woods.

“Just to get out and get fresh air, get exposed to sunlight and not to be stuck staring at a screen is really important,” he said.

Organizers plan to make the race an annual event - and the people in charge at the state park’s Nature Center Association have plans to make the park more accessible all year round.

“Our dream is to convert one mile of this existing trail into a trail that anybody with a wheelchair will use,” said Rick Hoffman, nature center association president.

The project requires getting approval from the U.S. Army Corps. of Engineers, that owns the land. Hoffman’s organization also is trying to raise about $200,000 to pay for the project.

Hoffman said the adaptive trail race proves there’s a need and that the new trail will be in demand.

“We’ve got more than 100 people here today running this race to help us bring awareness and funding to make this a reality.”

Ben and his family say they will be back and interested in utilizing a new trail that’s wheelchair accessible.

“We loved it,” Lawrence said. “Ben got to see the lake and go out on trails he wouldn’t necessarily get to see on his own.”

His son, who rarely speaks much around strangers, smiled and offered a three-word review of the race: “I liked it,” Beniah said.