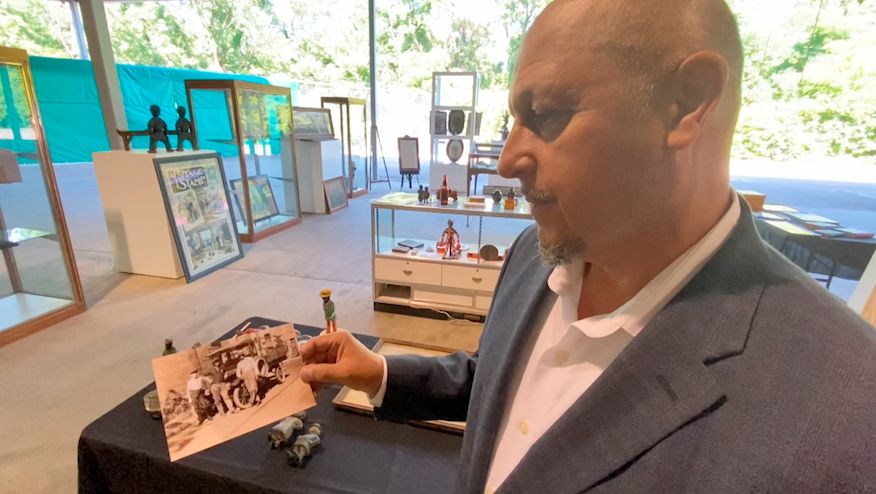 It began as the residential moving company Jacobs Moving in 1921 and has evolved to Accelerated Laboratory Logistics, specializing in commercial moving for medical companies, with five locations across the country.

In the early 90s, his father, the late Ralph Wilson, a Tuskegee airman, inspired him to discover more about his ancestors, in what would one day become the non-profit, Columbus Museum of African-American History and Culture.

“That really got me sparked and understanding a little bit more, maybe I needed to do some self-study, have some self-awareness and some knowledge," said Wilson. "And if I figured if I didn't know it, maybe other people didn't know it as well."

The current display is just a fraction of more than 2,200 pieces in the collection that includes family artifacts, items Wilson has acquired through auctions, antique shops, and his travels over the last 30 years.

And while Wilson has embraced the role of curator, he also wants to hear the thoughts of visitors.

“I want people to have thoughts and understand why some of these pieces can be hurtful, but also, the pieces should be inspirational, depending upon what you're looking at,” said Wilson.

Wilson said while the museum is a tribute to his family, he believes it will stand out as a one-of-a-kind destination for residents of the buckeye state.

“We have some museums that have some African American, but this is going to be solely dedicated to that," said Wilson. "We really want to overwhelm people in terms of the number of pieces that they see to bring the whole fabric and story of African Americans together."

Wilson will use 40,000 square feet and two floors for the museum, which will include a space for community events.

Wilson funds the project, but he is also reaching out to city and community leaders for support.

The project is slated to be finished on-site at 4001 Refugee Road on Columbus’ southeast side in 2024.