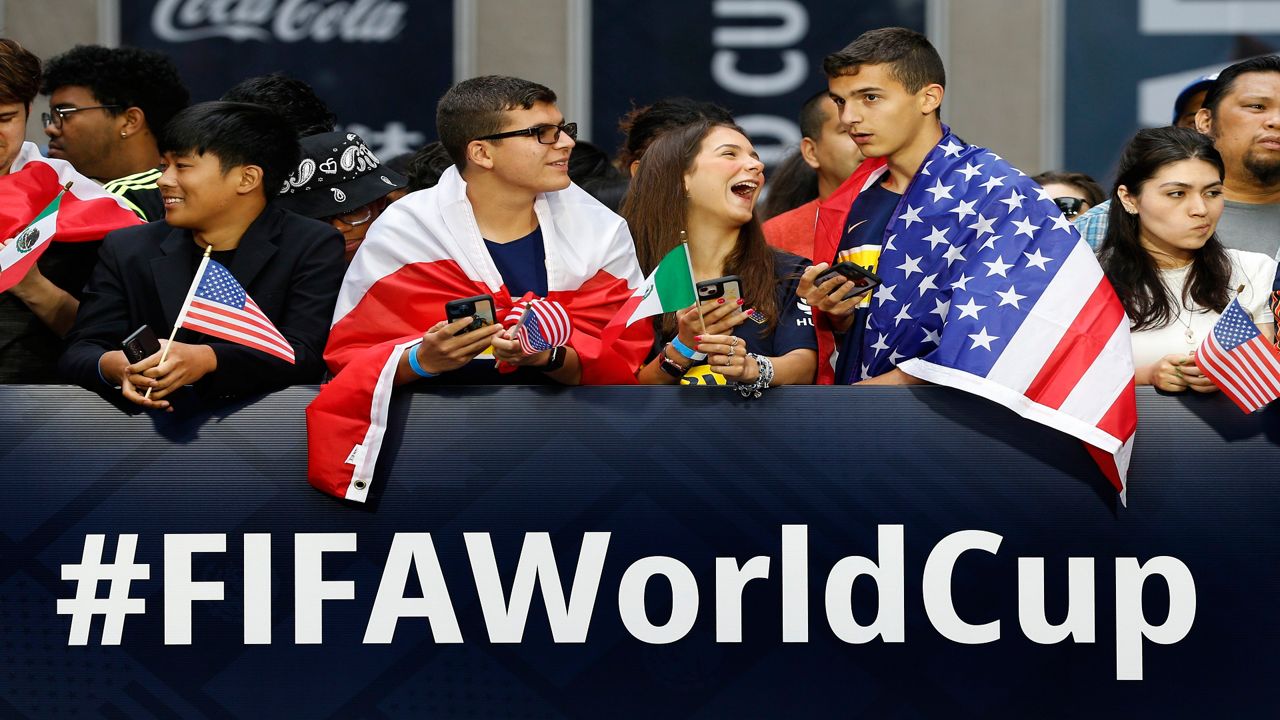 Fans wait along 6th Ave. for FIFA's announcement of the names of the host cities for the 2026 World Cup soccer tournament, Thursday, June 16, 2022, in New York. (Noah K. Murray/AP photo)

CINCINNATI — After months of planning their bid and pitching their case, the local organizing committee learned Thursday night that Cincinnati will not serve as a host city for the 2026 World Cup.

Cincinnati was one of 16 United States cities, and 21 across the U.S., Mexico and Canada, in the running to host matches four years from now during the World Cup, the largest single-sport athletic event in the world.

Baltimore, Denver, Nashville and Orlando also were finalists not selected to host matches.

Aaron Kohlhepp, a co-owner of soccer bar Rhinehaus, called Cincinnati not getting selected as a host city for World Cup 2026 “disappointing.”

“It’s disappointing to not be selected, of course, but this city has come so far in the soccer world in just a short time,” Kohlhepp said. “Big thank you to FC Cincinnati and everyone who was on the committee that put together our bid. The world doesn’t know what they’ll be missing.”

A lot of hopeful fans also gathered at the Pitch Cincinnati, a popular soccer bar across from TQL Stadium, home of FC Cincinnati.

The decision disappointed fans, but some felt they saw the writing on the wall.

“I had a bit of a doubt after the USA-Morocco friendly and the comments Christian Pulisic had afterward thought that kind of cast some doubt,” Chris Atwell, a U.S. soccer fan, said. “In the end, we just got a little surprised Kansas City got a bid for one of those. I guess I’m hitting the road.”

Jeff Berding, co-CEO of FC Cincinnati and a member of the local organizing committee for the World Cup, said Tuesday he was cautiously optimistic. He believed the city “demonstrated all of the best of Cincinnati” during the bid process.

Citing past draws like a USA-Mexico match and the recent friendly match against Morocco, Berding felt the city proved soccer is “highly relevant” locally and there’s “great support from our fans.”

“This isn’t the last the world will see from Cincinnati on the international soccer stage,” he said.

“We’re not going to be left behind in any measure,” he said. “We’re going to continue to use soccer as a catalyst for growth and to promote Cincinnati to the world. And that won’t strop regardless of the FIFA announcement.”

Cities selected included 11 U.S. cities, as well as three cities in Mexico and two in Canada.

The U.S. selections included none of the nine stadiums used at the 1994 World Cup. The Rose Bowl in Pasadena, California, and Orlando’s Camping World Stadium were the only ones remaining in contention, and they were among the sites dropped in the final round.

Information from the Associated Press contributed to this story.