The Akron History Center will include artifacts representing development of the Ohio & Erie Canal by Irish immigrants. (Photo courtesy of Canalway Partners)

Akron History Center to open in 2023, ahead of city's bicentennial celebration

AKRON, Ohio — Akron plans to open a $2 million museum-quality history center downtown in late 2023, ahead of the city’s 2025 bicentennial celebration.

The Akron History Center is expected to occupy the central building at the Bowery, a redeveloped stretch of historic buildings on South Main Street, framed by parks at Lock 3, Lock 4 and Lock 2 on the Ohio & Erie Canal.

Years in the making, the center becoming a reality is because of in large part to former deputy mayor and past Summit County Historical Society chairman David Lieberth.

Lieberth, who currently serves as executive secretary of the Akron Bicentennial Commission, first came up with a plan for an Akron museum 40 years ago, he said.

In 1982, Lieberth chaired an historical society committee looking into the potential for a museum dedicated to the rubber industry, which made Akron the “Rubber Capital of the World.”

After a year of interviewing prominent Akronites, the committee issued a report concluding a museum was needed, but should be undertaken in partnership with the historical society.

A museum also should include other examples of invention and innovation, as well as other industries that shaped the city, from rubber to oats, toys and farm machinery, Lieberth said.

WPA Writers guide illustration by A. Koerbling. (Courtesy of the Akron History Center)

That report came in handy a few years later, when the city successfully drew the Inventors Hall of Fame to Akron in 1987.

“This document helped us layout an exact plan for what might occur in Akron at the Inventors Hall of Fame,” he said. The report also helped companies looking for a place to warehouse corporate artifacts, which the historical society accepted.

In 2002, when Lieberth became deputy mayor, he helped launch an early version of a history center — an arcade-style museum at Lock 3 Park, he said.

Staffed by volunteers, the Akron Toy Marble Museum was in operation for the next 10 years.

In 2012, Lieberth retired as deputy mayor, but continued looking for the right location for a history center, he said.

That location surfaced recently when Lieberth was invited to the Bowery to have a closer look at the project, in which he has had strong interest.

The Bowery is in the heart of the city’s central business district, comprising the historic 12-story Landmark building and five smaller retail buildings, from 164 -184 South Main St.

Welty Building Co. President and CEO Don Taylor, who’s also a managing partner in the Bowery, told Lieberth Building D in the development is for nonprofit use only. He said the city holds a permanent easement on the building, whose sole purpose is to serve as a corridor for the public to move between South Main Street and Lock 4.

Taylor asked if Lieberth had ideas about what could go on the walls in that building, which Lieberth said he did.

“And that was the beginning of it,” Lieberth said. 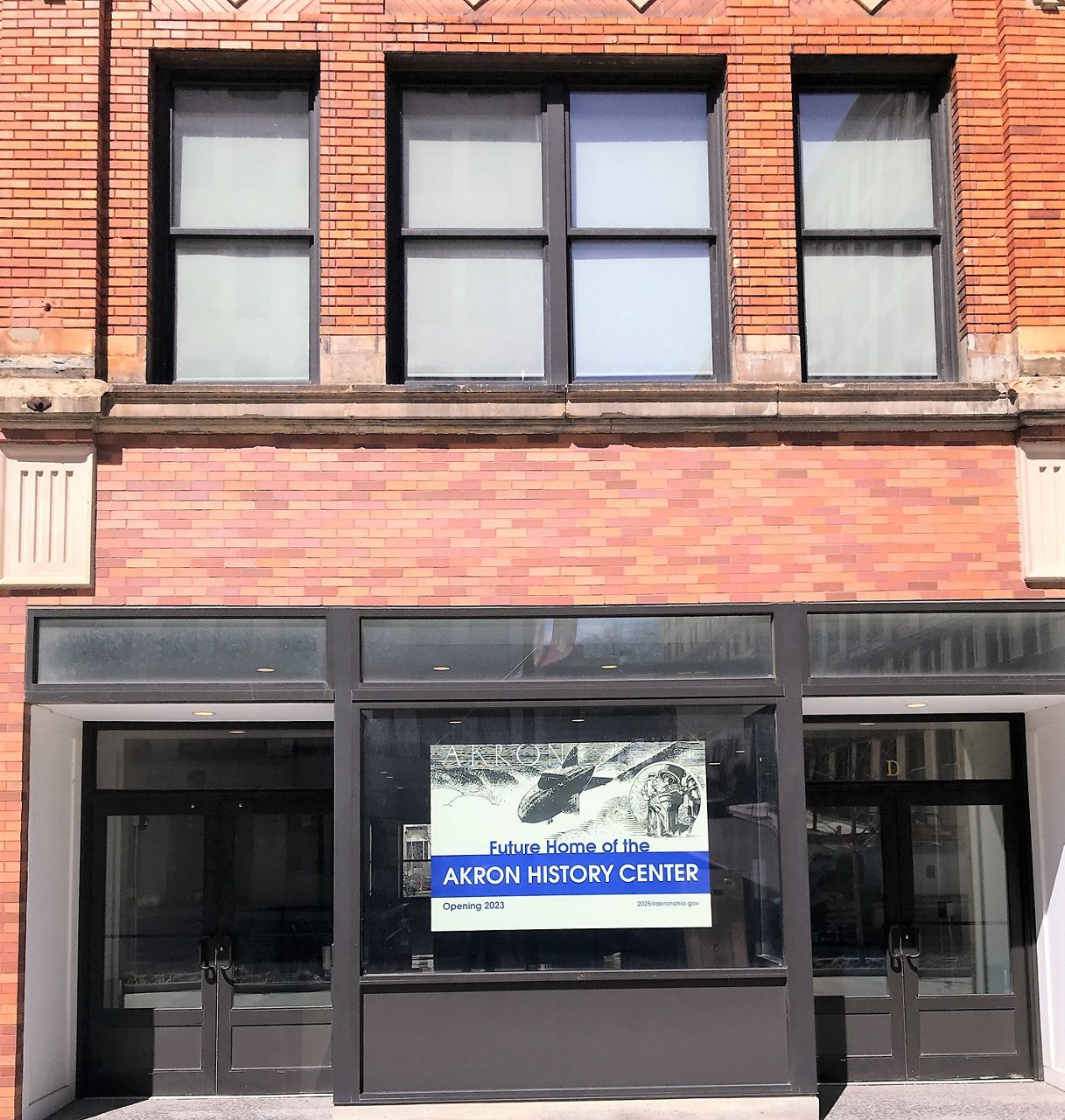 By 2021, Lieberth had formed a history center steering committee, which was up and running, through a planning grant from the GAR Foundation, he said. The first thing the committee looked at was the feasibility of establishing such a center in a century-old building.

Everything had been renovated except the floors, which had to remain original per the historic tax credits.

“So on the main street level, we have these gorgeous terrazzo floors, which are the first artifacts to be displayed,” he said.

With 3,000 square feet of exhibit space over three floors, the Akron History Center committee enlisted the expertise of Dennis and Kathy Barrie, known for their hand in development of the International Spy Museum, the Mob Museum, the Rock and Roll Hall of Fame and Museum, Maltz Museum of Jewish Heritage and many others.

“Their opinion was that this was an ideal site for a permanent Akron history exhibit,” he said. “They've now been engaged as our exhibit designers.”

“So these are two local, but quite prominent nationally, firms that we've engaged to get this project done,” Lieberth said.

Akron City Council recently allocated $450,000 toward the center, which leaves $1.5 million to be raised, he said.

Lieberth has initial outlines ready of what should be included in the center, which will be operated by the Akron-Summit County Public Library, he said.

Exhibits will include an array of artifacts, such as those found along the Portage Path representing the indigenous population, he said.

Exhibits will represent everything from construction of the Ohio & Erie Canal by Irish immigrants to artifacts from Quaker Oats Co., which operated in the city until 1970.

Famous Akronites will be represented, he said, such as NASA astronaut Judith Resnik, who was born in Akron and died in 1986 when the Challenger exploded.

The history center also will include information on the rise of Ku Klux Klan and race riots in the city, one which burnt down city hall, he said.

“There are some unpleasant aspects of Akron history, which we will also look at for context so that people know can know all the history,” Lieberth said.

Because of space constraints, the center will feature flat screens to extend exhibits, and exhibits will occasionally be rotated, he said.