The Sojourner Truth Project Committee plans to build a 10,000-square-foot plaza that will welcome visitors coming into Akron. (Courtesy of GPD Group )

AKRON, Ohio — As the anniversary nears of Sojourner Truth’s celebrated “Ain’t I a Woman” speech in Akron, a dedicated group of women is at work bringing a years-long dream to fruition — a tribute as memorable and powerful as the life and work of the slave-turned-suffragette, built on the site where she made history.

In less than two years, the Sojourner Truth Project Committee plans to build a 10,000-square-foot plaza that will welcome visitors coming into Akron from the north, with the word “TRUTH” clearly visible on entry. Near the plaza’s center will be a sculpture of Sojourner Truth seated on an Impala lily, a petal design radiating outward from her feet, and her right hand extended in welcome.

“Truth is such a big word. It’s so bold and so concrete. What it stands for is unwavering,” said Summit County Metro Parks’ landscape architect Dion Harris, who the committee commissioned to design the plaza.

Truth was a powerful voice for women’s rights, especially women of color. An emancipated New-York slave born Isabella Baumfree, she changed her name in 1843 before crisscrossing the nation to speak against slavery and for women’s rights.

On May 29, 1851 during an Ohio Women’s Rights Convention, the steps of the Old Stone Church on High Street served as Truth’s platform. She was not invited, nor was she asked to speak, but her speech that day is remembered as a voice for all women.

Although the steps are long gone, the power of Truth’s speech remains, rendering it one of the most important women’s rights speeches on record in the U.S.

Harris researched Truth’s life and work to infuse that meaning into the design, he said. The impala lily is the national flower of Ghana, Truth’s ancestry on her father’s side.

“It just represents so much strength and the beauty that comes out of that, that I felt that was probably the most representative,” Harris said. “So for the statue, we'll see it on a platform that's right in the center of that lily, and those roots are symbolized in the concrete that comes from the building.” 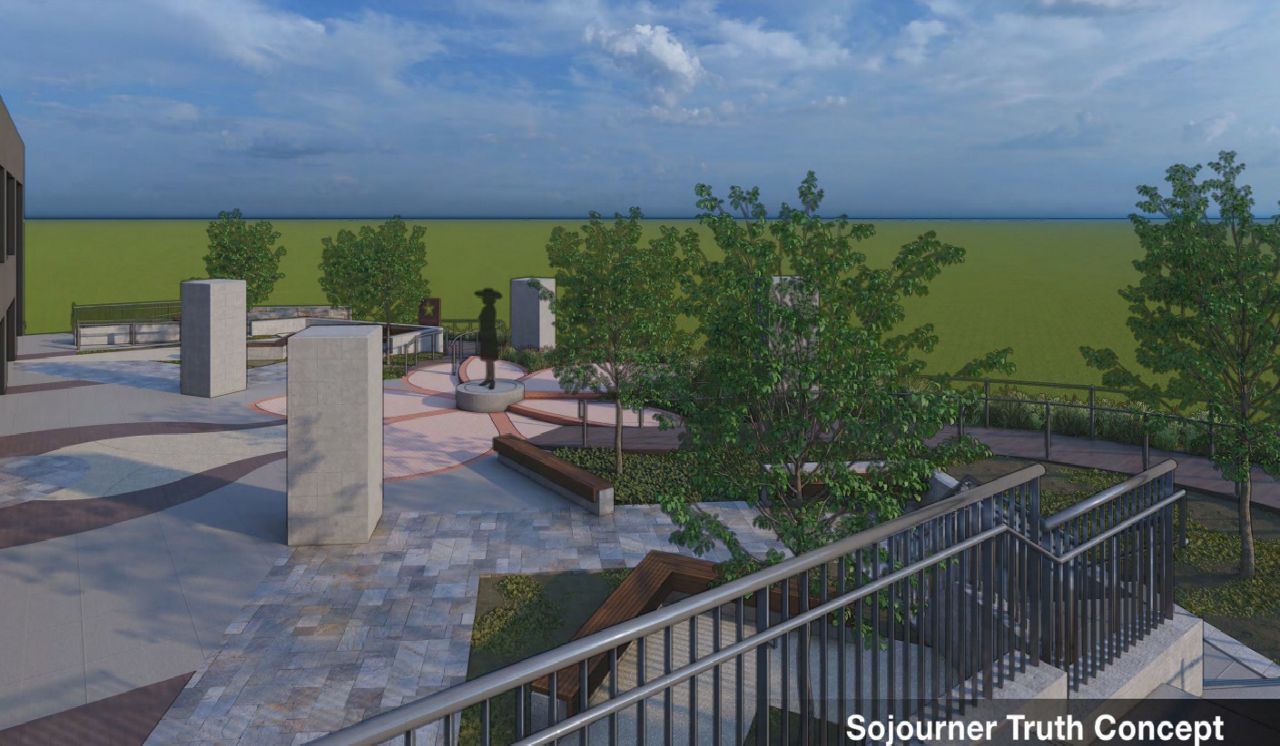 Sojourner Truth is remembered as a powerful voice for women’s rights, especially women of color. (Courtesy of GDP Group)

When the project first launched in 2019, the intention was to put together a commemoration of the centennial anniversary of the 1920 ratification of the 19th Amendment to the U.S. Constitution, giving most women in the U.S. the right to vote, said Towanda Mullins, the committee chair and first vice-president of Delta Sigma Theta Sorority.

The committee planned an event and later commissioned Akron artist Woodrow Nash to create a 10-foot statue of Truth to be installed at the Old Stone Church site, which is next to the United Way of Summit & Medina Counties.

Then known as the Summit Suffrage Centennial Committee, the group opened fundraising to the community with a goal to raise $500,000, and partnered with Akron Community Foundation as its fiscal agent, she said.

When the pandemic struck, the project was stalled, reshaped and finally relaunched, evolving from a sculpture to a plaza, Mullins said. In the meantime, the committee continued to attract new members and the project gained growing community support. 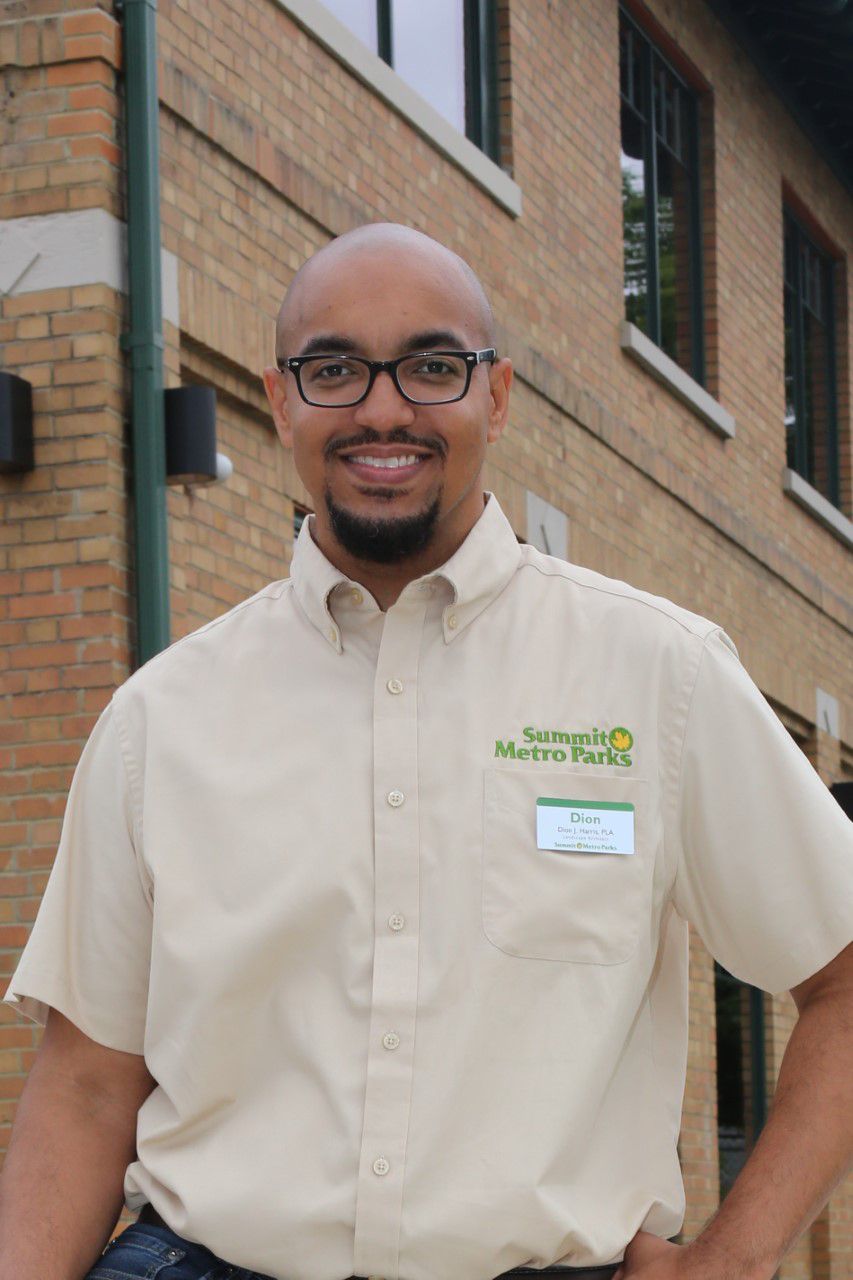 “You could just see part of what happened in Sojourner’s life happening on a very small scale in this committee,” said Lisa King, Summit Metro Parks executive director. “The thing that really stuck with me is the work that Sojourner did, you know, that was like the ripple in the lake. You know, and it rippled out to future…”

Now known as the Sojourner Truth Project committee, the group has raised about half of the roughly $1.4 million needed to complete the plaza, Mullins said, and build it by late 2023.

One of the biggest changes the project underwent came when the Knight Foundation funded the committee’s involvement with the National Trust for Historic Preservation’s African American Cultural Heritage Fund, said Margaret Maurer, who is leading the committee’s education component.

“They have connected us to researchers and scholars across the country who are helping us evolve to a true national monument to Sojourner Truth and her speech,” she said.

The goal is to ensure history is told accurately, to enhance the monument’s cultural value, Mullins said. The committee members also want the meaning of Truth’s work to be preserved and shared.

“We talk about equity and inclusion and all of that,” said Theresa Carter, president of the Synthomer Foundation. “Those derive from her and others like her who stood in the pathway, who cleared the pathway, for all of us to kind of move forward and keep fighting for it and demanding that we have those rights, so that we can be successful.”

The committee is working with the Summit County Historical Society and Akron Public Schools to create educational resources about Truth’s life and work, to be used in classrooms, Maurer said.

“We felt determined to make sure people knew what it was about, because you can put the most beautiful statue in the world up in the middle of a wonderful plaza, and if the community doesn't understand its significance, if it's not connected to the monument, then it doesn't mean anything,” she said. 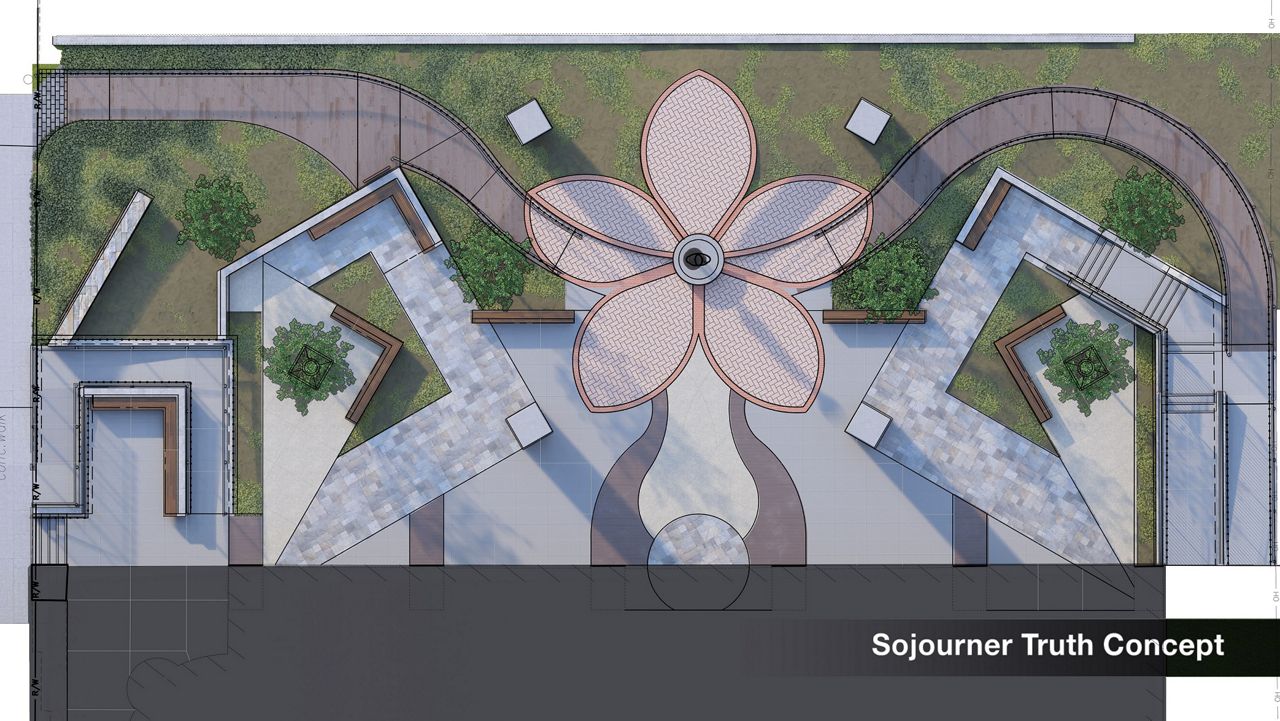 Near the center will be a sculpture of Sojourner Truth seated on an Impala lily, a petal design radiating outward from her feet. (Courtesy of GDP Group)

The committee is taking information to the community as well, she said, giving presentations at events and for various organizations. They’ve also created a 16-minute video that will soon be distributed.

Faye Hersh Dambrot, known locally as a women’s advocate, was working on a Sojourner Truth statue project before she died in 2000, Mullins said. Her granddaughter, Alysse Dambrot, now manages social media for the Sojourner Truth committee.

“We stand on the shoulders of the past committees,” Mullins said.

“When we were the Summit Suffrage Centennial Committee, all along Towanda had in the back of her head that the project that she wanted to see move forward was this statue commemorating the life of Sojourner Truth,” Derrow said. “And somehow she got the whole committee to move in that direction. You know, and here we are today.”