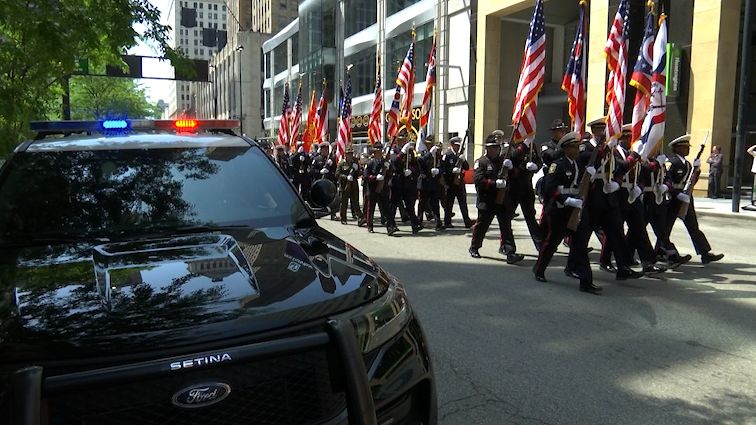 Law enforcement officers from across Hamilton County marched and commemorated the lives of their fallen officers in downtown Cincinnati on May 10, 2022 (Tino Bovenzi/Spectrum News 1)

CINCINNATI — National Police Week recognizes the dedication and sacrifice of peace officers killed in the line of duty. In southwest Ohio, that duty is being fulfilled with a memorial ceremony and parade through the streets of the Queen City.

Cincinnati police officer Andrea Booker and her grandmother, Patricia McDonald, were in the front row for the event.

They represented and celebrated the life of the late Forest Park police officer Charles McDonald, who died 21 years ago from a heart attack.

“He was a great father and a great officer,” Booker said. “He was a great representation of what I wanted to be growing up, and that’s what I am now. I’m honoring his legacy.”

Patricia misses her son dearly, but knows the community highly respected him.

“What I remember about my son is how much he enjoyed being a police officer and how much he enjoyed helping the community and helping the people around him,” Patricia said. The Police Memorial Ceremony and Parade is about to start at 11 in Downtown Cincinnati at Fountain Square. After a short program, officers will march to District 1 for a memorial ceremony. I’ll have a story later tonight on @SpectrumNews1OH pic.twitter.com/Xu91XHJfNx

Law enforcement agencies from all around Cincinnati marched from Fountain Square to the memorial in front of Cincinnati Police District 1.

Booker was just a teenager when her father passed away. At the time, she didn’t know that she would follow in his footsteps.

Now, she takes great pride in each stride, marching for her father.

It was a somber day for many families, but Patricia also was happy. Happy to see her granddaughter carrying on the family legacy.

“Every time I see her in that uniform, I see her dad,” Patricia said.

“This is a day that we commemorate the service and the sacrifice of not just the deputies and officers who have fallen, but their families who have given so much, so much to this uniform and what this uniform stands for,” McGuffey said. “Because it’s important to remember and we will always remember.”