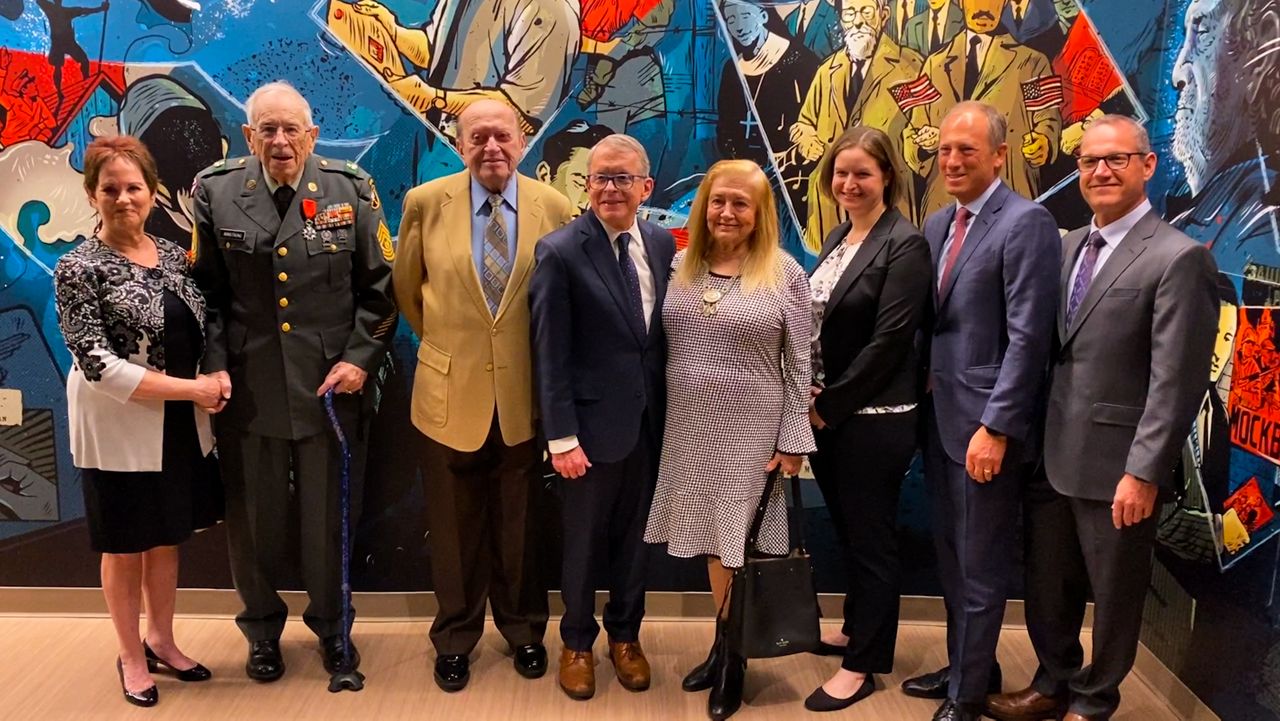 Ohio Gov. Mike DeWine poses for a photo with survivors and a liberator from the Holocaust for the 42nd annual Governor's Holocaust Commemoration. (Tino Bovenzi/Spectrum News 1)

The governor met with liberators and survivors before the event as he toured the Holocaust and Humanity Center.

“The train station has great significance,” DeWine said. “My dad went out of here. One-fifth of all the servicemen going off to war went through here, but so did the survivors. Survivors got here primarily by train.”

Many survivors remade their lives in Cincinnati thanks to the heroic acts of liberators like 97-year-old Command Sgt. Mjr. Henry Armstrong,  who liberated Gunskirchen Lager on May 4, 1945. Armstrong said the Holocaust should be a reminder to treat people better.

“I don’t care what their faith is, what their color is or anything else — we’re all God’s creatures,” Armstrong said. “And that’s the way we should be treated. Be treated the way you want to be treated.”

Armstrong will never forget the horrors he saw in southern Germany in the 1940s.

During the presentation, Armstrong got the chance to light a candle with Holocaust survivor Conrad Weiner, who survived the forced labor camp, Budi.

Weiner said remembering the horrors of the Holocaust is important because history is starting to repeat itself in Ukraine.

“Ladies and gentlemen, I beg of you, today, the world is burning,” Weiner said. “Do not stand with folded arms.”

DeWine said visiting the museum and hearing the testimonies of the survivors and liberators is powerful beyond measure.

“We’re fortunate that we still have people who are alive, who remember and who can tell us about their story," DeWine said. "Every survivor has a different story. Every survivor has a story that you just can't really believe. Well, you know, people around them were killed. Their families were killed, but they survived, and they survived so they can tell us that story."

DeWine is hopeful that the next generations can be taught about the Holocaust to help prevent future atrocities.

“It's a story that, you know, our children need to know and our grandchildren are great-grandchildren,” DeWine said. “One thing that I'm very enthusiastic about is how well the Holocaust Museum here in Cincinnati has done in reaching out to schoolchildren.”