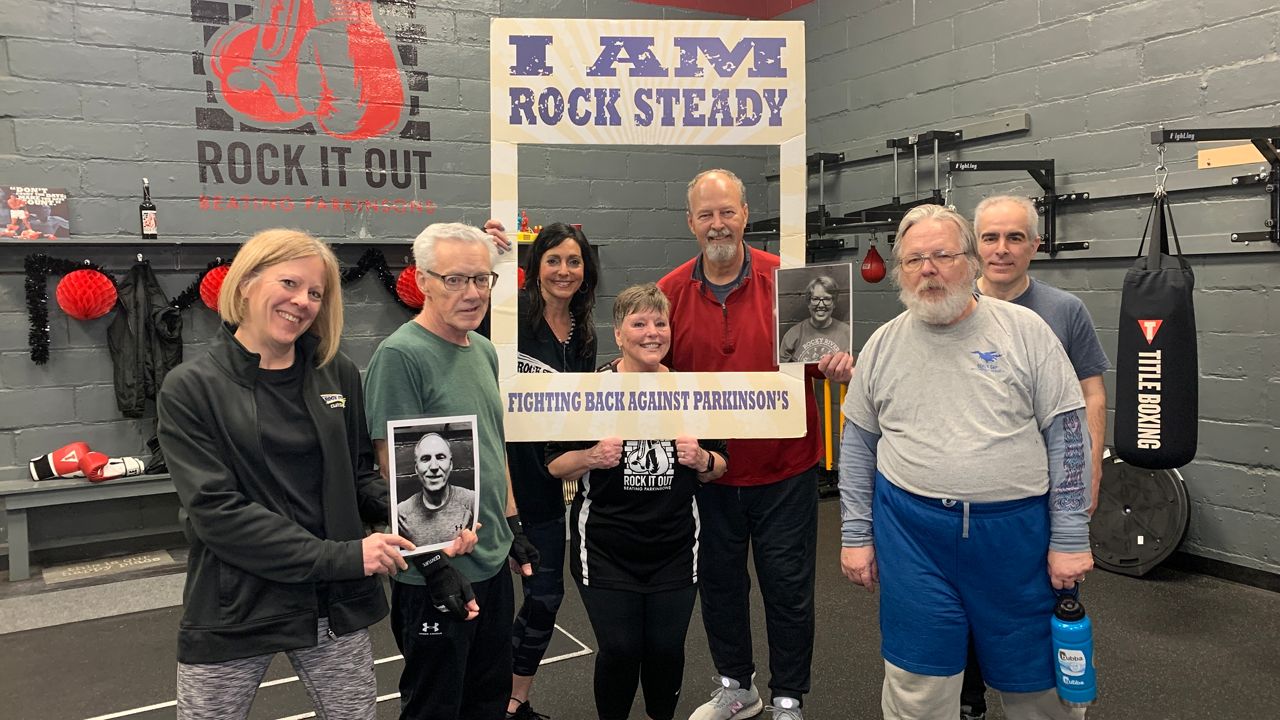 Clients of Rock-It-Out, a nonprofit for people with Parkinson's disease in Lakewood, with the founder, Maria Pujolas. (Taylor Bruck/Spectrum News 1)

LAKEWOOD, Ohio — Deb Davidson is ready to fight the biggest battle of her life. Her main opponent is Parkinson’s disease. Doctors diagnosed her with it in April 2019.

“I felt awful and frightened,” said Davidson, a client of Rock-It-Out. “It's a disease that robs you slowly.”

Parkinson's disease is a neurological disorder that has no cure. Symptoms of Parkinson's disease are as broad and as colorful as a rainbow. Tremors, stiffness, gait and balance problems, speech and swallowing problems, and loss of cognitive function are just some of the symptoms that people with Parkinson’s disease can experience.

“It affects our memory, our speech, our balance, causes depression,” Davidson said. “We all progress differently. It manifests itself in so many different ways.”

The cause of Parkinson’s remains unknown. But one thing doctors know is that exercise is one of the best medicines.

“The only way to beat PD, this is my solution is, I come in here and I beat the crap out of these bags, and out of this guy, and I feel like a new human when I leave here,” Davidson said. “We get stiff — our stiffness is horrible. You know, it's constant, and it doesn't go away unless you move things and people say, ‘but it hurts to move.’ Well, it's gonna hurt worse if you don't move. And that's with anybody with arthritis or anything. Movement is essential.”

Dr. Hubert Fernandez, the director at the Center for Neurological Restoration at the Cleveland Clinic, said studies have shown aerobic exercise is best for patients with PD, but that moving your body in general is better than nothing.

“Exercise to us is actually the closest of them all, to be honest with you,” said Fernandez. “It may not be as sexy as a gene therapy drug or an infusion medication. But you know, it really works so, so thus far, that is our prescription in maintaining and hopefully slowing disease progression in Parkinson's.”

Exercise is an important part of healthy living for anybody, but at the Cleveland Clinic, Fernadez said for people with Parkinson’s disease exercise is no longer a recommendation — it’s a prescription.

“It's forced movement. It's big movement. It's hand-eye coordination,” said Maria Pujolas, head coach, owner and founder of Rock-It-Out. “It's voice activation. It's cognitive, because you're remembering combinations.”

Pujolas has been a nurse for over 30 years and a Certified Fitness Trainer since 2013.

She worked in oncology, did hospice and GI nursing, and said with no other diagnosis could she give anybody hope.

When clients come to her, she said they’re upset and scared. No matter the stage or type of Parkinson’s disease, she aims to be a glimmer of hope and her clients’ biggest motivator.

“They're a family to me,” Pujolas said. “They're so thankful every day. They're just so generous and kind. They're just grateful. And it's really easy to do when you know that people believe in you and have so much faith.”

“I can't say enough about Maria and the coaches. They're just phenomenal. And besides being excellent coaches, they're beautiful humans and beautiful hearts. And I'm just thankful to God,” Davidson said. “That's one of the best things about Parkinson's is that Maria came into my life as did the other coaches and the beautiful people that I work out with. We are family.”

The program has given Davidson confidence, friends and a fighting chance.

“It makes me feel that I have hope and I'm not alone,” Davidson said  “And I have people who genuinely care about my well being. I've lost about 40 pounds since I started here. I feel younger than I've ever felt, in the past 20 years anyway. I feel empowered. I feel that I want to take on this disease with as much grace and courage that I possibly can. And this program is helping me so much.”

Davidson said she knows her opponent may win someday, but with each punch she yells “not today, PD. Not today.”

Rock-It-Out is currently applying for grants and takes donations. For more information, you can visit here.