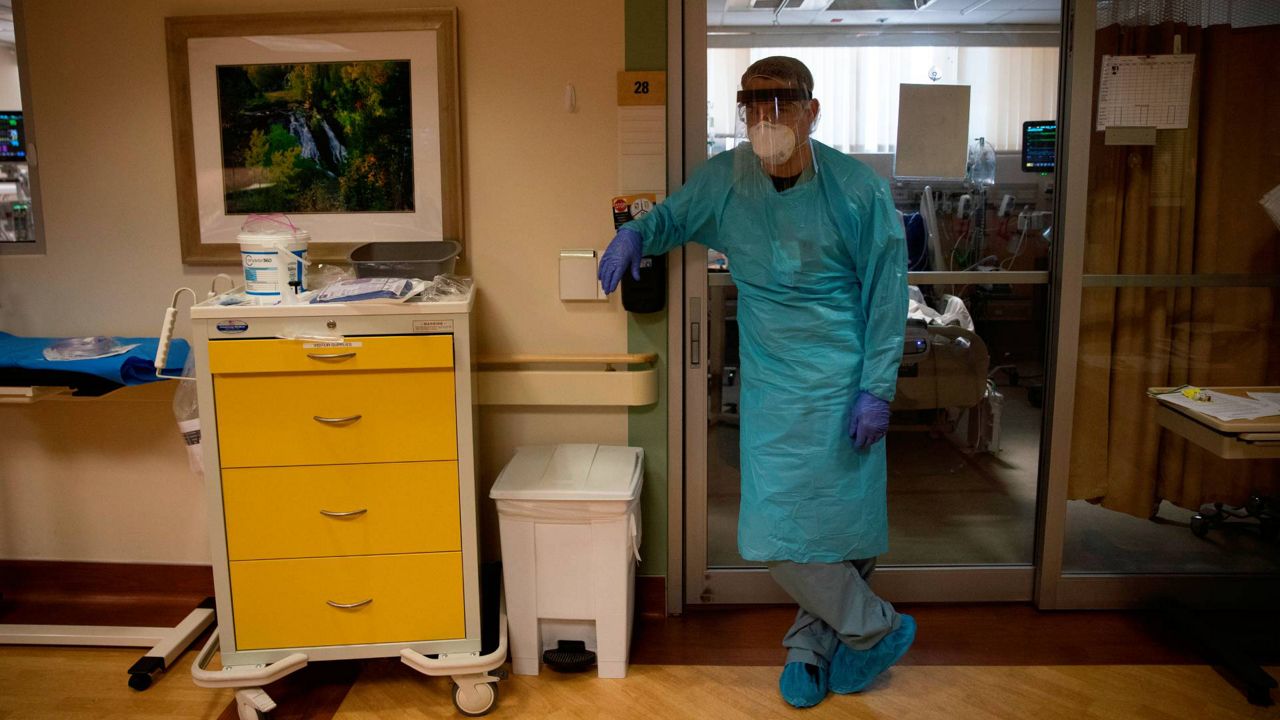 ​​​COLUMBUS, Ohio — Hospital staffing levels are improving as COVID-19 hospitalizations in the U.S. reach record lows, and the trend is resulting in decreased pay for travel nurses who secured lucrative contracts during earlier surges.

Justine Offutt, 36, an ER nurse in northeast Ohio, said she left her staff emergency nurse position and switched to travel nursing about a year ago to earn higher wages through travel contracts, ranging from $90 to $115 per hour at peaks of the pandemic.

“They were paying ‘crisis rates.’ That’s what they were calling them,” she said. “But it has been slowing down as far as COVID is concerned, and so the need is not necessarily as great.”

The rates have gone down as omicron subsided, but Offutt said she plans to continue taking travel contracts because the jobs remain more enticing than permanent positions. She said hospitals are basically hemorrhaging money on travel nurses, but many facilities don’t have enough permanent staff to move away from travel nurses entirely.

“Frankly, some have moved into the travel side of the business as there have been pockets of the country and certainly pockets in our state that have needed to bring in temporary staffing,” he said. “I think it's oftentimes younger folks that have that freedom to be able to move to a different city for three months. They may not be tied down with family or children or other things, and the pay for those jobs has been quite high to fill in those gaps.”

Thomas expects some travel nurses will transition back to permanent roles in the months ahead, with the highly lucrative travel contracts mostly becoming a thing of the past.

“I think some of that is going to start to cool down. I think some people are hopefully going to come back to their routine jobs, and we're also working really hard — anyone who is here as a traveler that we've brought in, we're trying to make sure they understand the benefits of working here. Maybe they'll sign on permanently,” he said.

Offutt said travel nurses are reluctant to work permanently for hospitals. They feel they have been overworked and underpaid during the pandemic, she said.

“They have been intentionally short staffing nurses because the less they pay for labor, the more the return. They can get away with saying, ‘Nurse Suzie, instead of taking her typical two patients, oh, we'll just throw one more in there.’ And it's been like that for a while and it's just gotten worse and worse,” she said. “All of it just has added up and we are sick and we are tired.”

Tammy Reno, 51, a nurse who was working at the bedside in the Cincinnati area on a med-surge floor when COVID-19 hit, said she left her job in late 2020 when the pressure on nurses to work overtime and deal with unsustainable nurse to patient ratios became too much.

“We had to sign up for overtime, and if we called off for the overtime, then that went against our attendance, so the expectation was that we did this so that we didn't have poor patient ratios, but they said if nobody signs up, we could potentially have seven, eight, nine patients, which is completely unsafe,” she said.

She moved to case management nursing and currently works in Toledo on a case management travel nursing assignment. Reno expects her next contract will pay less due to the improvements in staffing levels.

Congressman Tim Ryan (D), who is running for Senate, joined as a cosponsor last month to a bill that would establish minimums for nurse to patient ratios, he said in a statement to Spectrum News.

“Our nurses and health care workers have done the unimaginable throughout this pandemic, working harder than ever to keep our communities going,” Ryan said. “Even before this pandemic, our nurses were stretched thin, providing lifesaving care to their patients. As we rebuild from COVID-19, we must work to alleviate strains placed on our nurses by passing legislation requiring nurse-to-patient ratios. Safe staffing standards not only protect our nurses, but ensure better, more focused care for their patients.”

Ohio Sen. Sherrod Brown (D) introduced similar legislation in the Senate in May 2021.

Lawmakers are also eyeing changes in the area of travel nursing. A bipartisan group of nearly 200 House members sent a letter to the White House earlier in the year requesting federal competition and consumer protection agencies to “investigate the potentially anti-competitive activity of some nursing staff agencies” that brought costs for hospitals “vastly higher than pre-pandemic rates.”

Additionally, some opportunities are closing for travel nurses because states are ending emergency protocols that allowed out-of-state nurses to get a waiver exempting them from getting the nursing license for the state where they were traveling, Offutt said.

In January, 2023, Ohio will join a multi-state licensure compact of dozens of states giving nurses flexibility to move.