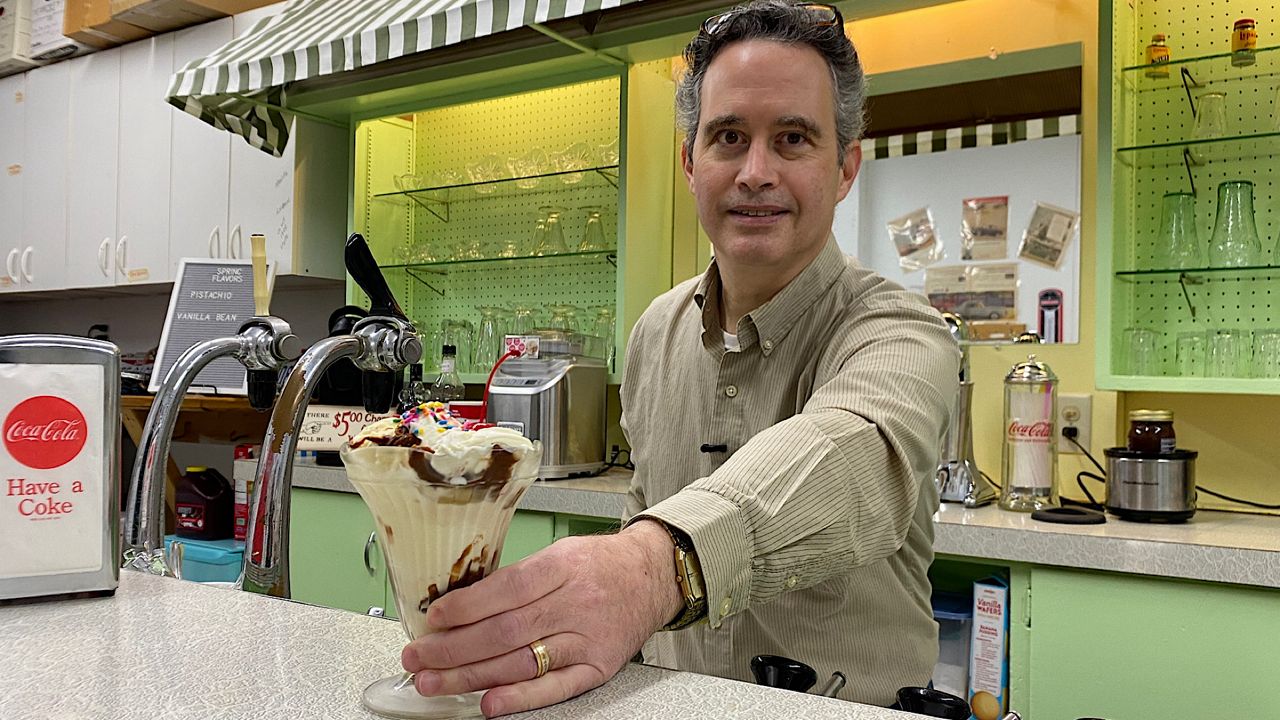 Chris Kinsella makes delicious treats out of his home using the same machine he used as a teenager when working as a soda jerk. (Vivica Grayson/Spectrum News 1)

STOW, Ohio — Chris Kinsella said as a teenager growing up in Illinois, he thought he would be fired from his part-time busboy job for a mistake he thought he made.


“So, I rushed home to my house, called my sister who worked at a youth commission that posted part-time jobs for high schoolers and I asked her if she had any job postings, and she said, ‘No, nothing,'” he said.

He said she informed him of an opportunity at a local pharmacy paying $2.75 an hour.

“They called me to say that they would hire me,” he said.

The job was at White’s Pharmacy, formerly owned by his then-boss Dorothy Sykora and her sister-in-law, Roberta or "Bert" Fry, the assistant manager.

He worked at the pharmacy as a soda jerk from September 1987 until it closed in May 1990.

“It's two scoops of the Dean’s ice cream, and then you have the hot fudge, the whipped cream, the sprinkles, depending upon the season,” he said. “I have seasonal sprinkles and then the cherry on top. In terms of the brand ice cream, I do make a homemade variety of ice creams. It's pistachio and vanilla are some of the spring flavors I'm offering now.”

While Kinsella now works as an assistant professor of history at Cuyahoga Community College, he said he also whips up yummy treats and thirst-quenching drinks from his home.

This is because in 2020, a friend brought his attention to something.

“It was pinching myself several times when I first saw it. I went from chills to watery eyes to dry mouth to it was it was a combination of emotions I didn't anticipate,” he said.

He said an Illinois friend sent him a picture on Facebook of a vintage soda fountain for sale, one that looked very similar to the one in White’s Pharmacy until he realized it was the same one.

He said the Illinois couple who sold the fountain to him had bought it in 1990 but had to sell it after 30 years because they were moving out of state.

Kinsella bought the soda fountain, and it now sits inside his garage.

Kinsella said he’s produced a 60,000-word memoir titled "The Last Soda Jerk" to give a voice to his memories from his time there. He hopes for it to be published one day.

He said the soda fountain will also remain close to his heart.

“It’s been said that you live two lives. The one life you live is this the one you're living and when you die, you die," he said. "But the second life or the second death is the last time that your name is ever uttered or an object or places that were mentioned. The way I see it is that White’s Pharmacy’s first death and all of these people was in May of 1990. But I'm allowing them to continue to still live all the way through at least to 2022.”

Kinsella said while he makes a variety of yummy treats, the soda fountain is not open for business. He said it’s a hobby and an heirloom for his family.