Keep Akron Beautiful's city cleanup has spanned the month of April for the past six years. (Photo courtesy of Phil Lombardo)

“This is not a Keep Akron Beautiful problem,” said CEO Jacqui Ricchiuti. “It's a community problem. This is a problem for the business owners, the residents, people that come through our city, and these people who are throwing the litter on the ground. We need their help to pick it up.”

Look around the city and you’ll likely see trash blowing down streets, piling up against fences and buildings, and lining commercial parking lots. Tires, too, are being dumped on side streets with abandon, she said.

“We clean up the city every day of the year, and we're really trying to go to more of a volunteer kind of model because Akron has a litter problem,” she said. “We are currently the only ones picking up the litter in the entire city.”

To volunteer to help out during Clean Up Akron Month in April, Keep Akron Beautiful is encouraging volunteers to sign up online for two community cleanups planned:

During the rest of the year, Keep Akron Beautiful will supply trash pickup kits — gloves, garbage bags, litter pickup tools and disinfectant — and will pick up the bagged trash, for any organization, neighborhood or individual who wants to pitch in, said Community Outreach Manager Genevieve Bohnak.

“It's just the responsibility of us as community members to ensure that, you know, if we're throwing away trash that it's secured in a receptacle,” she said.

Ricchiuti cites several reasons why such so much trash isn’t making it into garbage bins.

A decade ago, thousands of people were sentenced to community service each year, but in the past year that number has dropped to 39, she said. That’s because during the pandemic, the courts were more inclined to issue fines than community service. The pandemic also prohibited Keep Akron Beautiful from hosting a cleanup for the past two years.

But other factors are at play.

People have been stuck at home, generating more trash, and they might not know how to get rid of bulky items, she said.

Also, while the pandemic closed down dine-in restaurants, carry out was available, creating lots of trash that’s been thrown on the ground, combining with face masks, she said.

What’s more, people have less pride and less love for where they live, she said.

“It's just snowballed,” Ricchiuti said. “We need people to take more pride and we need help cleaning it up. We are never going to pick it up on our own and in 10 years it is the worst I've ever seen it. I mean, the tire dumps are out of control.”

Last April, Lombardo and about 30 North Akron volunteers, including the Facebook group “I hate litter!,” picked up garbage that included 248 tires from just a few streets in the ward, he said. In all, the group collected 83 bags of trash, weighing 1,031 pounds.

This year, Bohnak contacted Lombardo about broadening the North Akron cleanup, she said. 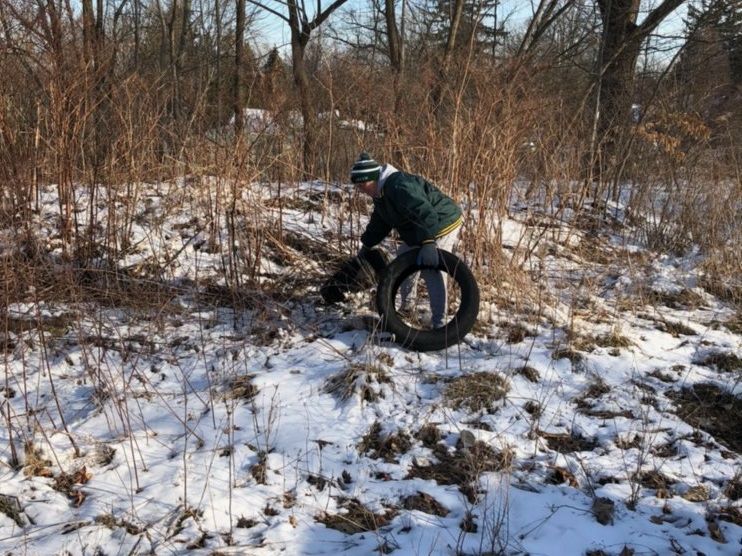 Keep Akron Beautiful recently audited recycling bins around the city and found North Akron’s to be “the worst of the worst,” Ricchiuti said.

In preparing for this year’s cleanup, Lombardo drove around North Akron identifying 18 of what he calls “hot spots” of trash, he said. He’s already collected 121 tires.

He and Bohnak are working on the logistics of handling the tires, shopping carts and other bulky items, he said. At the hot spots, he’ll position teams who will send texts when bags are filled so Lombardo or the city can collect them.

Bohnak said she is working with other council members to host cleanups in their wards. Councilman Donnie Kammer has one scheduled for Ward 8 in May, she said, while Tara Mosley, Ward 5, and Sharon Connor, Ward 10, have expressed interest.

“If we can kind of tackle those areas with volunteers, then we're hopeful they'll keep coming back,” she said.

The Akron cleanup has spanned the entire month of April for the past six years. The agency is hoping for a strong turnout this year, Ricchiuti said.

“I go to bed thinking about it at night. I wake up in the morning, I drive in and I see it,” she said. “We really we need people to help us.”