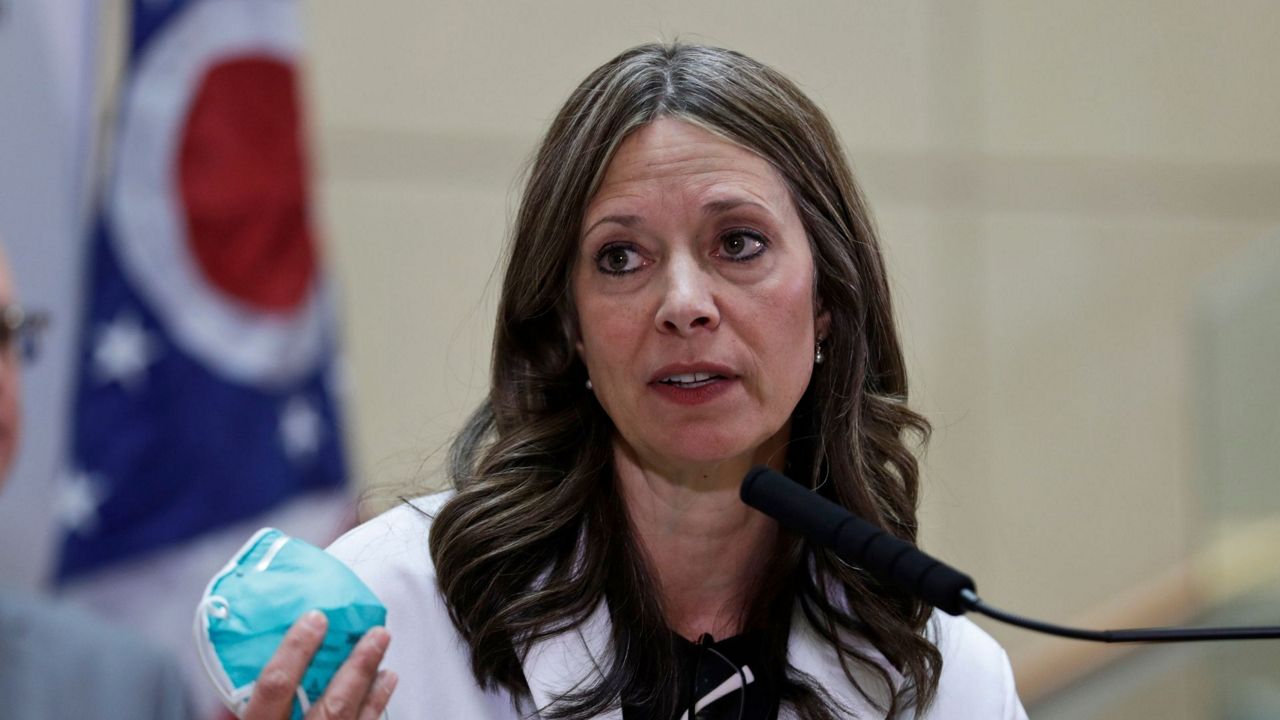 
“I just didn’t want anyone to die," she said. "I wanted everyone on that life raft, and I would have taken a bullet, gladly. I would serve. I would do it a million times over.”

During a virtual conversation hosted by the Cleveland Leadership Center, the former director of the Ohio Department of Health reflected on the last two years and shared some behind-the-scenes moments.

“I remember driving through this downtown Columbus background, with all the traffic going in early March, knowing that I was going to have to come up with some words that would make somehow tolerable, the fact that we were going to look like the streets of Wuhan within two weeks," she said.

At the start of the pandemic, Acton became an overnight hero, pushed into the forefront of history. It's a place she never expected to be.

“We certainly were lost in doing our best and my goal was getting it 80%. If we could get it 80% right and if 80% of us did the right thing, all of us would get through," said Acton.

Her metaphors, mantras and messages like “not all heroes wear capes” and “I’m not afraid, I’m determined” went viral.

“Coincidentally, like so many words that came to me, they came serendipitously in moments. That was something my husband had said to me that morning. My school teacher/coach husband, he says these really wise things that he says to little kids," said Acton.

While she gained the attention of those in Ohio, she also garnered national attention, appearing in articles nationwide, even in the New York Times in a piece called, “What Makes a Great Leader?”

​Her most ardent supporters sported “Dr. Amy Acton Fan Club” yard signs in their front yards, and she even had a Facebook fan page.

Acton’s self-described quiet leadership and science-driven explanations calmed people during a state of panic and uncertainty.

“So, what you saw was literally, you know, me talking like I am talking to you now. My kids would have said 'that's just mom' and, you know, as a doctor speaks. So, that was different, and to their credit, they never scripted me, which is, I think, very highly unusual," she said.

But as time went on and mandates came down, she was also villainized. Protesters demanding Ohio reopen restaurants and businesses stormed the state capital and even her home.

“Yes, I did have 24/7 state highway patrol in my driveway of a very normal house, very little house in a normal street in a normal neighborhood and executive protection, and all that was real. Certainly, some of the anti-Semitic things were very real. But my want, like had there not been someone with a giant gun in my front yard, I would have gone out because so many people were hurting," said Acton.

Still, she said the outpouring of love and togetherness outweighed the hate.

Ultimately, in June 2020, Acton stepped down from her role at ODH and hoped to return to her life before the public eye. But her mission to serve Ohioans didn’t waver.

“You know, we falsely saw this economy versus health debate going on, but that's not true at all. We're all of it. Each of us had to worry about our health and our businesses," she said.

The Youngstown native said she has a big attachment to Cleveland and northeast Ohio.

Her passion for giving back to homeless youth comes from challenging experiences in her childhood.

“I was removed from a pretty rough situation at the age of 12," said Acton. "And really saw that some of the same kids that I'd gone to school with were, you know, at my old school in a different zip code, were just as smart, just as caring. But our lives started to go in different trajectories, and that's when I first understood this concept. Though I didn't have words for it yet, that your zip code can matter more than your genetic code.”

“I was a little nervous. I'm like, is it super political than I'm doing this? And people said, you know, no. When someone is transitioning, everyone in town in Cleveland gets behind them," she said.

Acton’s background is in philanthropy and public health. She said she’s working now to figure out what’s next. But Acton wants to stay in Ohio to help the state move forward.

“I want to take whatever goodwill there has been generated and put it back to the people," she said.