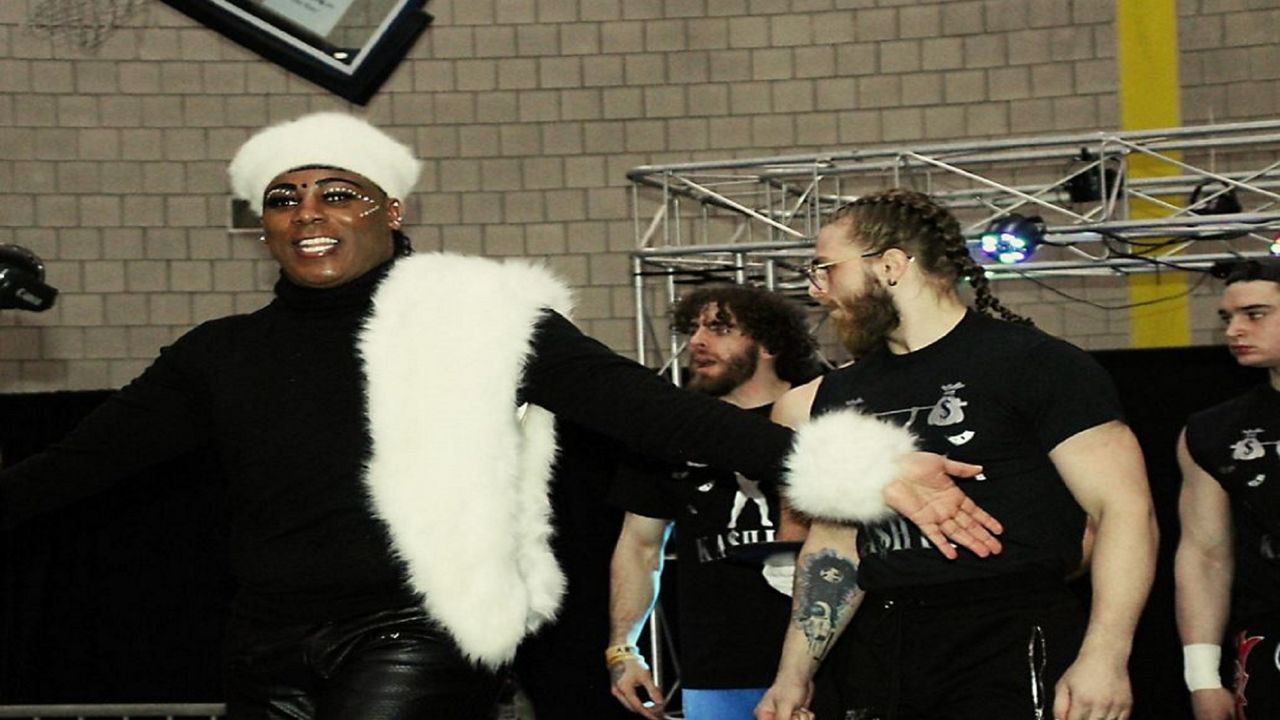 Kenn Moore performs as Kenn Vazion's and said wrestling promotion has been a welcoming and accepting place since he started wrestling. (Photo: Courtesy of Chelle Belle Photography)

CLEVELAND — The wrestling ring has become a more inclusive place for Black wrestlers and those who are part of the LGBTQ community, inviting more to become members of the wrestling community.

As the stars of MEGA Championship Wrestling ignite the crowd, Kenn Moore is gets ready backstage, already in character.

“Getting cute, looking sexy, being better than everybody else,” Moore said while putting on his lip gloss.

MEGA’s first openly-gay wrestler’s confidence was on full display when he entered the ring as the egotistical Kenn Vazion, the leader of the faction KashINC. After Moore managed his team to victory, he headed backstage, clearly proud of his performance between the ropes.

But Moore should not be judged by the Kenn Vazion persona.

By day, the Central State University graduate is a hardworking attendance officer for the Lorain County Juvenile Court, handling a wide range of responsibilities.

“I love interacting with families, because sometimes, you know, sometimes when people come to court it’s, like, their worst day,” Moore said. “And so I treat people with respect and dignity because like you never know what a person is going through.

“I treat everybody fair, respectfully, and just try to make everybody laugh and just feel comfortable with people being here in court. Kenn Vazion is a whole different character outside of work,” he said with a laugh.

Moore is the first Black and openly LGBTQ person to have his position. Court administrator Tim Weitzel said Moore was the right person for the job.

“It starts with his positivity, and, you know, you put him in a situation with other employees and it automatically makes the situation better. He’s a hard worker, we know his educational background, we know what his goals are,” said Weitzel.

The ring Moore loves is evolving. Moore said there's been significant progress toward accepting people like him.

Moore has also found a sense of welcoming. The former college cheerleader spends many nights at MEGA’s training building, working on his skills, but also finding acceptance.

“This locker room is very open minded, they didn’t treat me differently, they treated me as like I was one of their little brothers,” said Moore.

Brandon Xavier, MEGA’s trainer and promoter, helps train the next generation of wrestlers. He said he’s seen the business change a lot in his 20 years inside the squared circle. When it comes to inclusion, he’s made sure MEGA students know that this is a place that accepts everyone.

“You have people who walk through these doors, you have people from all walks of life. You don’t know somebody’s background story,” said Xavier. “Coming here, this might be the only place that they feel like they belong, because when you deal with the world and you know, you walk in to other places that are not accepting or they don’t want you there, well, you walk in these doors, I want you here, like, I want people to feel safe, I want people to feel like they have somewhere to go because sometimes the alternative when they don’t have somewhere to go, isn’t going to end well.”

Moore hopes inclusion will grow in the sport, hoping for more stories of success and acceptance like his.

Correction (2/28/22): This article incorrectly spelled the names of Kenn Moore and Brandon Xavier. An edit was made to reflect the proper spellings.