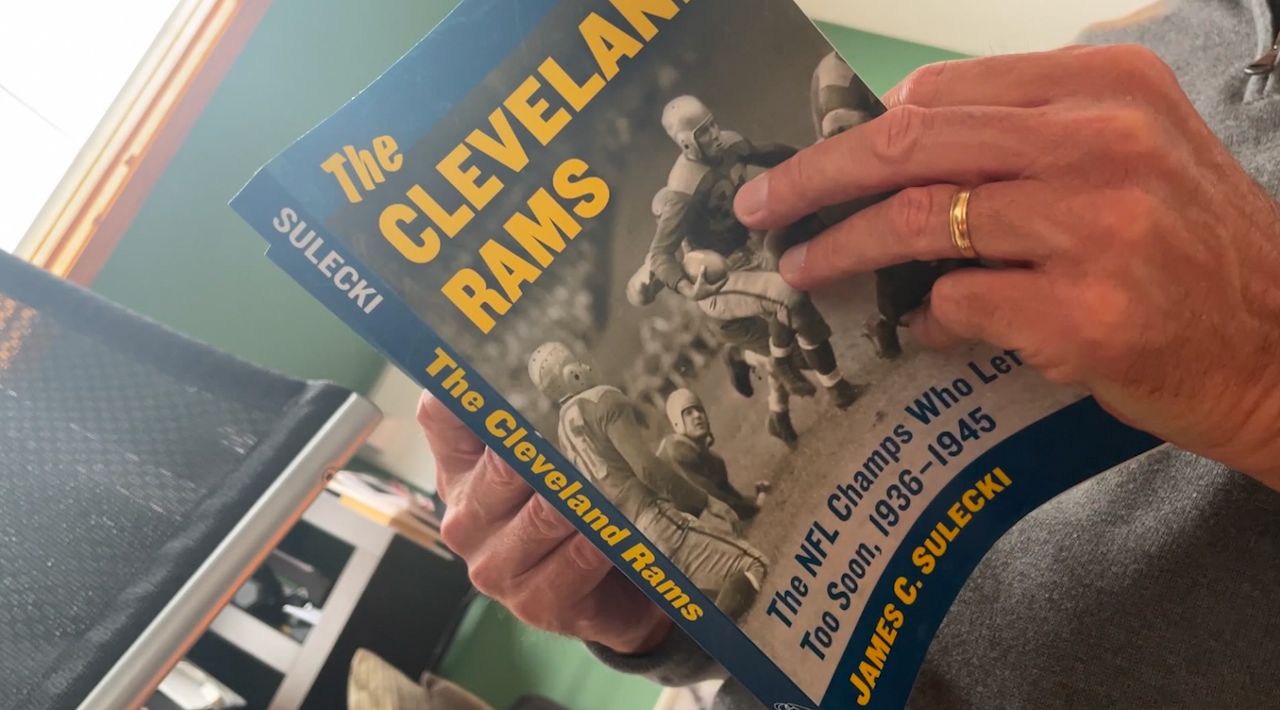 CLEVELAND — Author Jim Sulecki spent two years piecing clippings and photos together so he could write a book called, "The Cleveland Rams, The NFL Champs Who Left Too Soon."

He published it in 2016. He said they're snippets of Cleveland Rams history.

“This is an envelope from when the Rams from their very first season here," he said.

He wanted to spread awareness that the team didn’t originate in Los Angeles or St. Louis.

“I had a lot of people say 'well I never knew that,' so obviously there was story that hadn’t been covered,” Sulecki said.

The Rams became a franchise in 1936. Sulecki credits the Rams as designing the first logo for helmets, which were leather back then. A replica of that design is on display at the Pro Football Hall of Fame.

“The Rams were really trying to get beyond the idea that this is not a remarkable animal that it’s more of something that would be hard-charging and tough," Sulekci said.

He ultimately wanted to find out why they left town, and found newspaper clips saying the team was staying in Cleveland.

“There’s been these rumors that kind of haunted the rams for about three or four years that they were going to move," Sulecki said.

In fact, he found clips of newspaper stories that reported that the team's owner denied that the Rams would move West, but they never ran due to a newspaper strike at the time.

"This was just days before he got permission from the other NFL owners to move his team to Los Angeles," Sulecki said.

He ponders what would have happened if the stories ran.

"People have speculated about that," he said. "Would there have been such public pressure to stay here."

Sulecki believes that the team left because they had lost money in their last year in Cleveland in 1945, despite winning their first NFL championship. He said the town hadn’t embraced the Rams yet.

They were the fourth NFL franchise to play in Cleveland.

“There was a potentially much bigger market. Bigger stadium. More money," Sulecki said.

The Cleveland Rams played about half of their regular season games at League Park, and Sulecki said they’re the only NFL franchise to leave their town, immediately after winning a championship.

Sulecki said they packed up and left just under a month after their championship win. The snow on the ground didn’t yet hide the old dimensions of the football field.

“This was the end zone," Sulecki said, as he walked through the field.

To him, League Park may be a baseball field now, but there are remains of the Rams stadium that are hidden in plain sight.

“You can see still the outline of the ramp this used to be where the ramp came out from the street," Sulecki said while walking through the park.

He hopes to highlight how this relic of recreation has deep ties to football and baseball. The League Park sign as people walk in has no mention of the Rams.

“League Park isn’t associated as much with professional football. But some of the biggest names in pro football in the 30s and 40s actually played on this field," Sulecki said.

He added fans can only wonder how many other legends would have played here if the Rams hadn’t left.