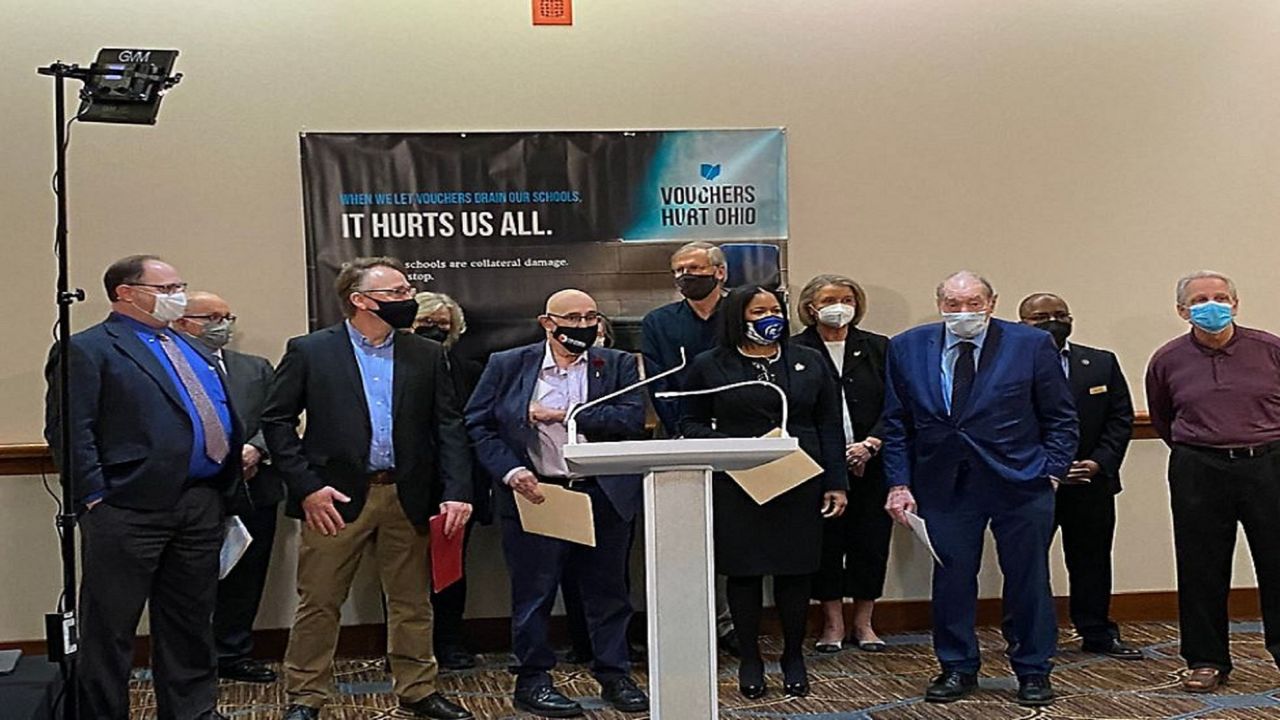 COLUMBUS, Ohio — A coalition of public schools is suing the state claiming the state's private school voucher program is unconstitutional. If the lawsuit is successful, the future of the education of tens of thousands of students who use the EdChoice Scholarship Program could be affected.


"Today is a historic day in Ohio," said Eric Brown, a Columbus City Schools Board of Education member.

The leaders of Vouchers Hurt Ohio and the Ohio Coalition for Equity and Adequacy of School Funding announced a lawsuit they filed against the state Tuesday in Franklin County.

The groups said the state's EdChoice Scholarship Program "poses an existential threat to Ohio’s public school system," claiming it illegally takes hundreds of millions of dollars away from them to give to private schools instead of fully funding public schools.

"The latest Ohio budget permits up to 25% of Ohio's public tax dollars designated for educated funding to be sent to private schools that are only educating 10% of Ohio's school-aged children,” said Brown. “The trend line is clear. By 2025, private school vouchers will be vacuuming up 50% of the state subsidy for students.”

More than 50,000 K-12 students around the state are on EdChoice scholarships. High school students get $7,500 per year toward their tuition, while K-8 students receive $5,500.

Critics of the lawsuit, like Aaron Baer from the Center For Christian Virtue, said there is plenty of money to go around for public schools and that getting rid of the vouchers would hurt children.

"It's heartless,” said Baer. “The same day that Columbus Public announces that they are going to remote learning again, the same remote learning that failed countless students, they filed a lawsuit to strip thousands of kids from their ability to go to a school that still in-person, a school that's meeting their needs. This is about public schools trying to grab as much money and forming a monopoly, not caring what it does to kids.”

Vouchers Hurt Ohio is a group made of nearly 100 school districts. It argues the General Assembly is trying to create a second school system, give more money to private school students and re-segregate schools.

"If someone tells you [EdChoice] is about helping poor minority children, hook them up to a lie detector test ASAP and stand back because the sparks are going to fly," said Nneka Slade Jackson, a Richmond Heights Local Schools Board of Education member.

Meanwhile John Fortney, a spokesperson for the Ohio Senate Majority Caucus said the lawsuit, "shows the deep disdain these greedy big government elitists have for parents to make decisions that are best for the education of their children. It is shameful and a direct attack on Ohio families."

The case could eventually work its way up to the Ohio Supreme Court. In the 1990s, the court ruled Cleveland's voucher program was constitutional but the state's school funding model was not.

The Institute for Justice has announced it will defend the EdChoice Scholarship Program and Expansion Program in court. The institute has been involved in and won similar cases across the country including three at the U.S. Supreme Court since it was founded 30 years ago.

“This lawsuit is a desperate attempt to force Ohio families to choose between keeping their kids in failing schools or going into debt to ensure their children have a decent education,” the group said.​