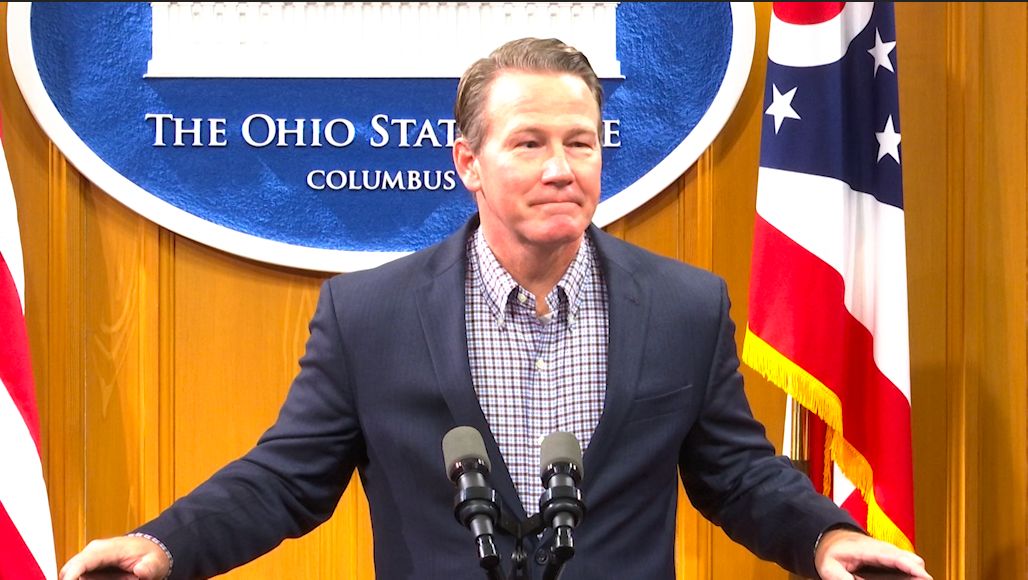 Lt. Gov. Jon Husted says he has 'no idea' why former FirstEnergy execs want him to talk

COLUMBUS, Ohio — Two former FirstEnergy executives, who were fired by the corporation last year, say Lt. Gov. Jon Husted, R-Ohio, can help them defend themselves in a shareholder lawsuit over the now infamous House Bill 6.


The bill, which was a taxpayer-funded bailout of two state power plants, is at the center of what prosecutors have called "likely the largest bribery, money-laundering scheme ever perpetrated against the people of Ohio."

On Tuesday, the Republican lieutenant governor answered questions about being named as a potential witness in a civil lawsuit surrounding House Bill 6.​​

"I have not been contacted by anyone other than the news reports," said Husted. "I'm always willing and happy to help anybody involved in the criminal justice system to find justice, whether that is a prosecution or an exoneration. (I'm) happy if there's any information out there that I can provide to do so."

Last week, former FirstEnergy CEO Chuck Jones and Senior Vice President Michael Dowling said Husted and others were "likely to have discoverable information" about why the company's board of directors failed to provide necessary oversight to prevent the deal, which federal prosecutors called a criminal conspiracy.

When asked why he thinks Jones and Dowling named him as someone who likely has information, Husted responded, "Well, I think there are a lot of people. I don't have any idea."

Jones and Dowling also said members of the Ohio House and Senate who voted for House Bill 6 might have information along with the defendants in the criminal case.

When asked to describe his role in the passage of House Bill 6, Husted said: "None."

The civil suit accuses Jones and Dowling of sanctioning “the corporate policy of illegal payments to government officials, including Ohio House Speaker Larry Householder and other individuals that resulted in a significant reduction in shareholder value when it was subsequently exposed.”​

Jones and Dowling could not be reached for comment nor could Gov. Mike DeWine, R-Ohio.

Last week, the governor had little to no response when Spectrum News asked him about Husted being named in the lawsuit.

But while the governor and lieutenant governor are not saying much, if anything, about the civil suit, a peek into their campaign contributions through the Ohio Secretary of State's website shows a longstanding relationship the two have had with FirstEnergy and its officials. Records show FirstEnergy has had different relationships with candidates on both sides of the aisle over the years.

Going back 20 years, the largest amount the company gave to a candidate for governor, not named DeWine, was John Kasich. FirstEnergy's Political Action Committee and its employees donated to the Kasich for Ohio campaign more than $120,000 between 2009-2014.

However, from 2000 until 2019, FirstEnergy, its employees and the corporation's PAC contributed more than $400,000 to Husted, the DeWine Husted for Ohio campaign and their transition fund.

And it is during that transition in December 2018 when FirstEnergy's PAC donated to the duo. On the 18th, DeWine, Husted, Jones and Dowling all had dinner together. The following day, the DeWine Husted Transition Fund received $20,000 in contributions.

Back in July, Spectrum News asked DeWine about that dinner and what was discussed. The governor said, "It was one of many, many dinners and many, many meetings and I don't really have any great specific recollection of what was talked about."

The one thing DeWine said the four did not discuss was the appointment of Sam Randazzo to the Public Utilities Commission of Ohio. Less than two months after that dinner, Randazzo was named chair of the PUCO. Five months later, DeWine signed House Bill 6 into law.

Back in July, FirstEnergy admitted to federal prosecutors it bribed Randazzo more than $4 million in exchange for Randazzo pushing the corporation's interests forward, specifically the passage of House Bill 6.​

​It should be noted neither Husted, DeWine, Jones, Dowling nor Randazzo have been charged with any crimes.

Husted also said he has not hired an attorney.

"I've not had any questions from anybody other than media," said Husted.