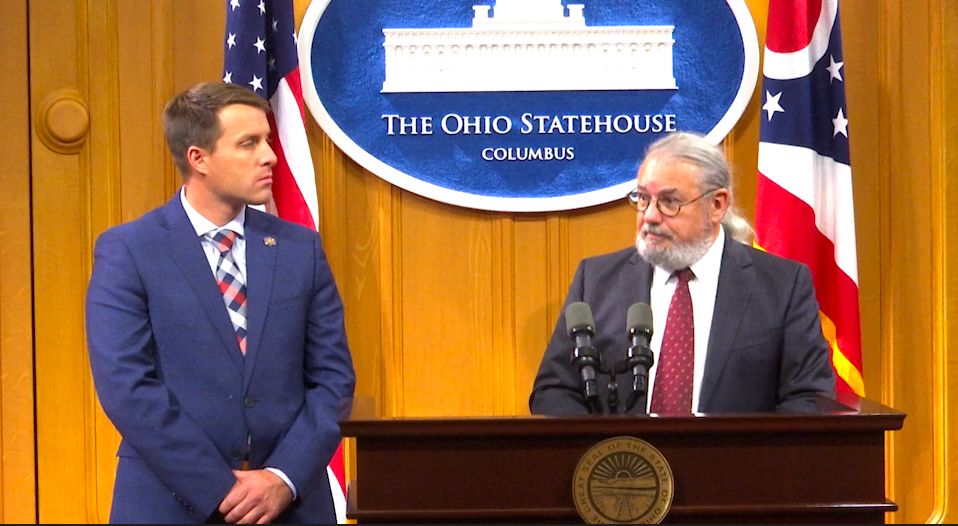 COLUMBUS, Ohio — A second bill to allow anyone 21 and older the right to buy, possess and grow marijuana recreationally will soon be presented to Ohio's lawmakers.


House Republicans announced its version of the idea Tuesday, months after House Democrats did the same.

"This is something whose time has come," said Rep. Jamie Callender, R-Concord.

Callender and fellow Republican Ron Ferguson, R-Wintersville, laid out the framework for a bill to make pot fully legal in Ohio for adults.

"Adults should be able to make decisions for themselves and that's what this bill does," said Ferguson.

Callender and Ferguson's “Ohio Adult-Use Act” would legalize, tax and regulate marijuana by extending the state's medical marijuana program to include recreational use when it comes to growing, processing, distributing and selling marijuana for Ohioans who are 21 and older.

"There's all kinds of states that are a wide range of states that have already gone through this process,” said Callender. “So we know what they've done right and we know where they've fallen short.”

The Republicans' bill would impose a 10% sales tax on marijuana with the money going to fight drug addiction and illegal drug trafficking. The bill would also allow Ohioans who went to prison for pot-related crimes to have their records expunged.

Gerald Moore Jr., a former college football player who now works with marijuana nonprofits, said it will help racial bias when it comes to drug arrests.

​"As our country moves away from criminalization of cannabis and marijuana, there remains to be a fundamental injustice for those that should not be imprisoned by the drug. Many of whom are people of color," said Moore Jr., President of Green Environmental Outreach.

Rep. Casey Weinstein, D-Hudson, introduced a similar bill in July, but his bill has yet to receive a hearing. He said as long as the effort to legalize marijuana is moving forward, he does not care whose bill becomes law.

"I think there are broad and growing coalitions within each party that will provide additional momentum for this,” Weinstein said. “So I think as the speaker and others see that I'm really hopeful that that will convince them to let this get through the legislative process, provide hearings so we can get a vote on this bill.”

.@JamieCallender says he would like a veto-proof majority but doesn’t think it’s realistic. @ronfergusonohio is more optimistic. @SpectrumNews1OH

House Speaker Robert Cupp, R-Lima, laughed when asked about the bill and said we'll see where it goes. It is no secret he and Senate President Matt Huffman, R-Lima, are not fans of it nor is Gov. Mike DeWine, R-Ohio. However that might not matter.

A ballot initiative was cleared in August by Ohio Attorney General Dave Yost to be put to voters in November 2022. So if a bill does not get passed before then, voters could ultimately legalize recreational marijuana on their own.