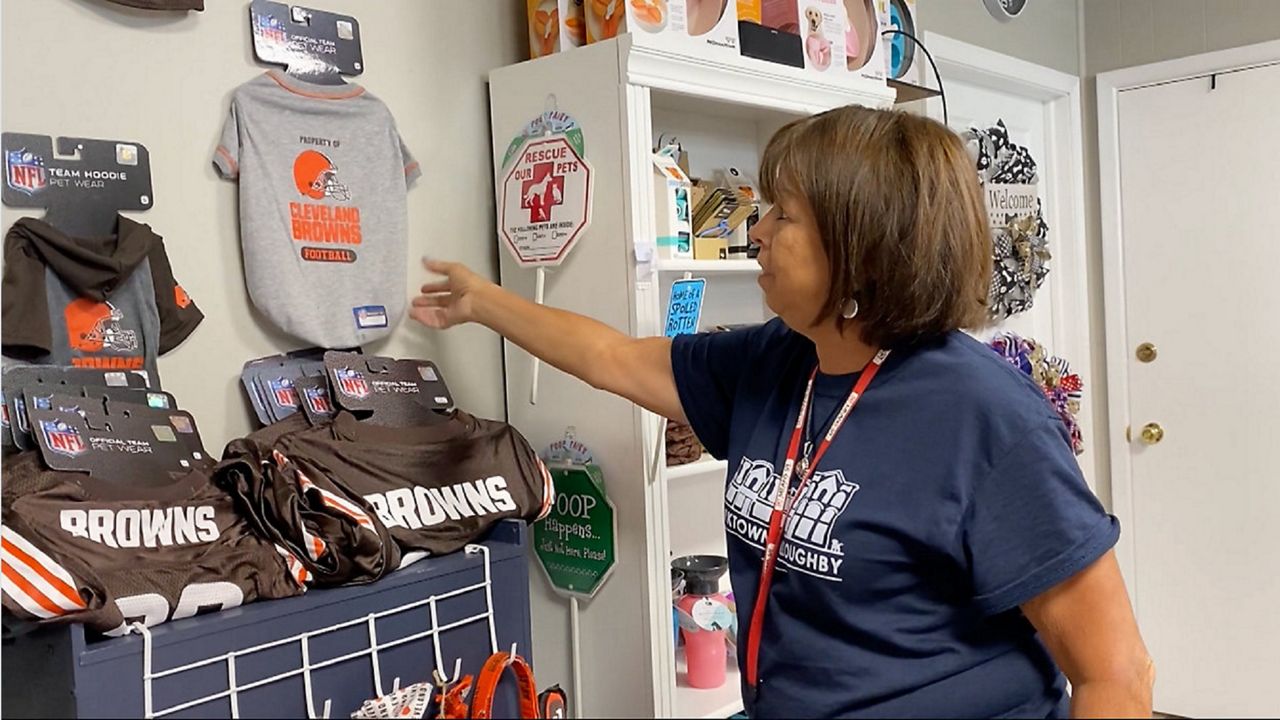 Gladi Reilly points at some of the merchandise on display at her store, Barktown, in downtown Willoughby.

WILLOUGHBY, Ohio — A new business in downtown Willoughby is filling a need in the community and giving its owner a way to start what she calls her "second act.”

Gladi Reilly has owned a building in downtown Willoughby's historic district for four years. The longtime tenant moved out in May, and Reilly decided she didn't need the space to run Viva Spanish! — the business she started 25 years ago.

She wanted to create something the growing community needed, and a new business for the next chapter of her life, so she sold Viva Spanish! to one of her daughters and set about the task of coming up with an idea for a new business that would benefit from the building's two available storefronts.

She spoke with city leaders and learned that the area's new apartment buildings were bringing more young people to the area, and many of them have dogs. She said the city identified three things it needs to grow and support this new influx of young people: a small grocery store, a walkable beverage takeout and an upscale dog boutique.

Her other daughter, Maggie, pushed her to go for option number three. Maggie helped Reilly with the concept and even came up with the name. The plan for Barktown was born.

"Maggie is really the genius behind all the things we buy because she's our buyer," Reilly said. "She's got a great sense of humor.”

Reilly's husband is a contractor. In just 60 days, he managed to convert the space along Erie Street into two separate stores that are connected by a door in the back. On one side, he created a boutique space. The other side became a space for a pet groomer. The two businesses funnel customers to each other.

Maggie helped Reilly choose merchandise that fills both the needs and the whims of pet owners. There are locally-made treats, leashes, portable dog dishes and jackets of all sizes, but most people immediately noticed the store's sense of humor.

There are squeaky toys that look like beer and liquor bottles, an homage to the area's many bars and restaurants, as well as t-shirts and hats with silly sayings, clever keepsakes and even sports gear for pets.

"Some different jerseys, some sweatshirts, some shirts, even a bowtie you can put right on your dog's collar," she said.

Reilly said the best compliment she's had so far is from a man who told her that shopping there is like therapy. She said, for her, the best part about working there has been watching people come in and just laugh

A door at the back of the store connects Barktown to Chelle's Paw Spa, where Michelle Kilker offers everything from what she calls "Tubby Time" to full service grooming.

Kilker only takes one pet at a time, so grooming only takes about an hour, or a little longer if the dog is a doodle variation. She never cages the animals there for grooming. They have full run of the store and get a lot of treats to ease anxiety.

"The uniqueness of us, I guess, is my entrance is in the back and hers is in the front, so if people get lost or don't know the signage, they'll end up in one of the two spots," Kilker said.

So, whether they walk on four legs or just two, most are likely to find a treat at Barktown.

More information about Barktown may be found on its website.