A Britney Spears supporter holds a portrait of the pop singer outside a hearing concerning the pop singer's conservatorship at the Stanley Mosk Courthouse, Wednesday, July 14, 2021, in Los Angeles. (AP Photo/Chris Pizzello)

Britney Spears is famous for many things: She’s a record-making pop star whose songs defined a generation, a formidable dancer who has delivered countless impressive performances and a doting mother of two young boys. 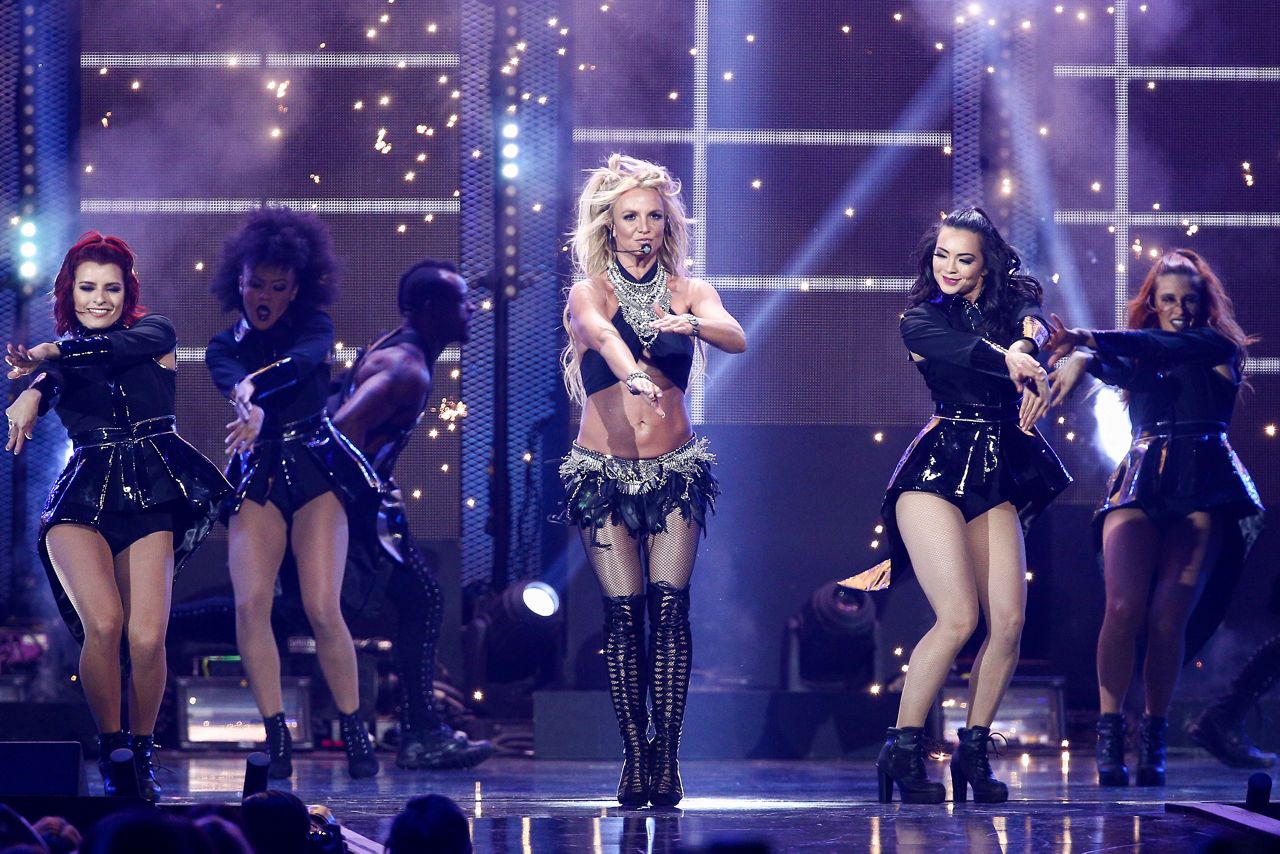 She is also the subject of a high-profile, court-mandated conservatorship that has controlled the vast majority of her life and finances for the past 13 years.

Spears’ conservatorship, long a subject of controversy among her fans, has gained increasing mainstream attention over the past several years.

Most recently, the “Circus” singer’s explosive testimonies alleging conservatorship abuse against her father, when she begged a Los Angeles judge to free her from the arrangement, thrust the pop star’s plight into international consciousness.

Spears’ case highlighted what advocates say is a major flaw in the U.S. legal system, which gives conservatees little to no power to remove themselves from conservatorships.

So what’s next for Britney Spears’ conservatorship — and will her case impact the broader U.S. laws?

What led Britney Spears to speak out?

Britney Spears’ conservatorship battle would not have, in all likelihood, gained nearly as much public attention had it not been for the constant advocacy of her most ardent fans.

The #FreeBritney fight began almost immediately after her conservatorship was imposed, when fans created the site FreeBritney.net in 2009 to question why the arrangement was necessary.

But the larger movement happened almost by accident, thanks to a fan podcast launched by Tess Barker and Barbara Gray in 2017 dedicated to picking apart Britney Spears’ enigmatic Instagram presence.

Two years later, Barker and Gray received an anonymous tip from an alleged close member of Britney Spears’ inner circle, who claimed the singer was being held in a mental health facility against her will.

And so began the fight to free Britney Spears from her conservatorship.

Spears herself has since said she welcomes the support of her fans, and has recently started posting about her conservatorship on her social media channels, which the singer typically reserves for home videos and personal photos.

What’s next for Britney Spears’ case?

Spears made a number of requests in both her June 23 and July 14 hearings — some of which have already been heeded, and others that will be more difficult for a judge to grant.

During her explosive testimony in June, the “Toxic” singer asked for a new lawyer, alleging that Samuel Ingham III — who had served as her court-appointed attorney since the conservatorship was imposed — failed to notify her that she could petition to end the arrangement.

Spears also claimed her lawyer said she “can’t let the public know anything about what has been done to me,” adding that she was never given an opportunity to choose her own legal representation.

Ingham stepped down as Britney Spears’ lawyer in early July, and was soon replaced by an attorney of her choosing: Mathew Rosengart, a former federal prosecutor with experience in high-profile cases.

Spears also detailed the numerous abuses she was allegedly subjected to by her father, and went so far as to ask the judge to charge her father with conservatorship abuse.

Unfortunately, Judge Brenda Penny does not have the authority to do so, according to Neama Rahmani, president of West Coast Trial Lawyers and a former federal prosecutor.

“Prosecutors, not judges, determine when to file criminal charges,” Rahmani told Spectrum News. “[Rosengart] needs to conduct a full audit of Britney’s finances to see if there are any financial improprieties, and if there is evidence of fraud or embezzlement or some other crime, then Britney's attorney should present that evidence to the proper prosecuting agency.”

The pop star also said in no uncertain terms that she wants out of the conservatorship entirely, saying she does not want to undergo a psychiatric evaluation in order to do so.

“With respect to Britney’s final request, which is to not have a new psychiatric evaluation again, that's certainly something that she can request of the court,” Rahmani said. “But the judge may require a new evaluation before she agrees to terminate the conservatorship. That's something that is within her discretion.”

In a recent court appearance, Rosengart said his team is moving “expeditiously” to remove Jamie Spears from the arrangement, a move he has refused to voluntarily make. 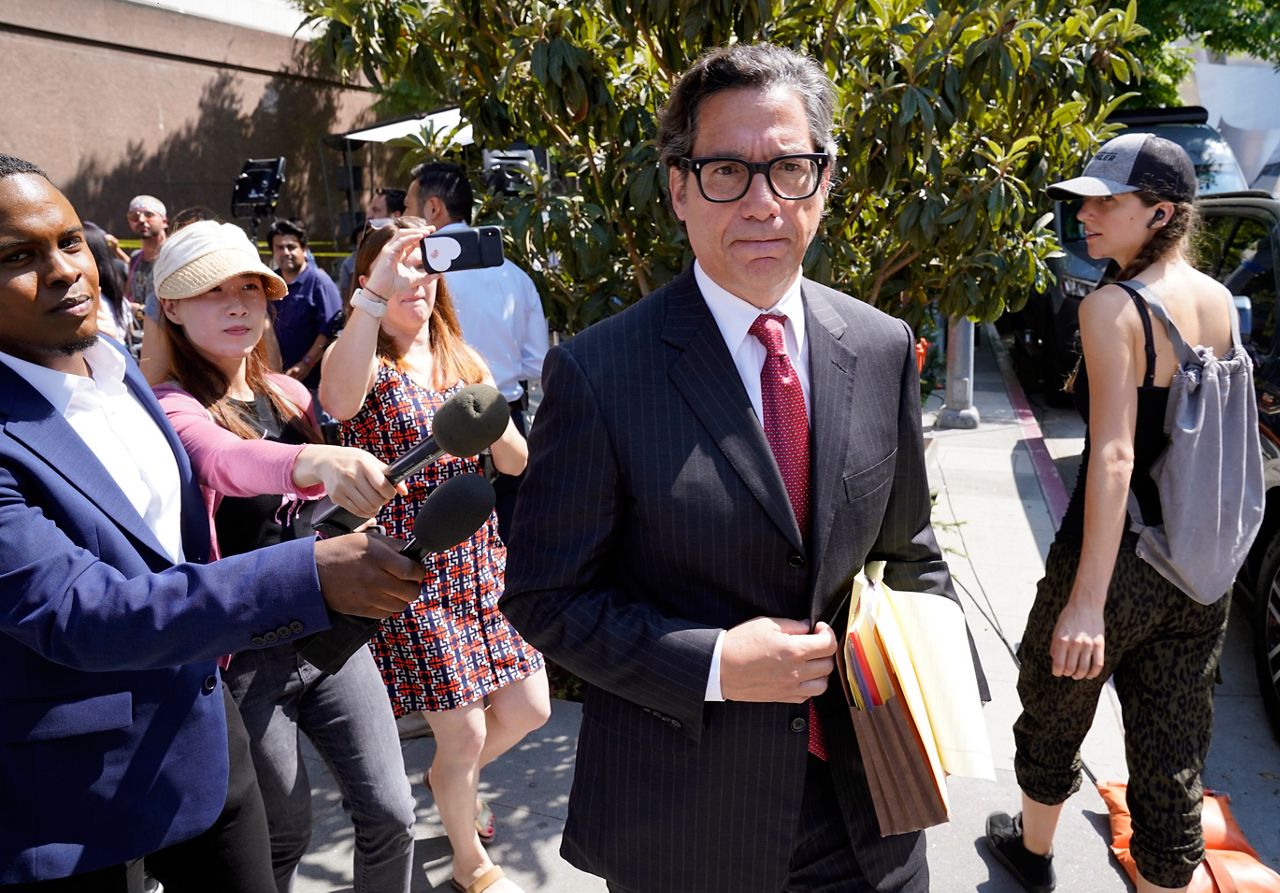 Most recently, Rosengart filed a petition to replace Jamie Spears as financial conservator of his daughter’s estate, instead proposing Jason Rubin, a certified public accountant (CPA) specializing in forensic accounting, take over.

Still, that resolution falls short of Britney’s request to terminate the conservatorship altogether.

It’s unclear why exactly Rosengart has yet to file a formal request to terminate the conservatorship, but experts say there could be a few reasons.

First and foremost is that conservatorship laws make it “really hard to terminate” such an agreement, Brent Kaspar, a family law attorney who is founder and managing partner of the San Francisco-based Kaspar & Lugay LLP, told Spectrum News.

Terminating a conservatorship is particularly hard when the person in charge of the arrangement still deems it necessary for the safety and wellbeing of the person under guardianship.

Rahmani largely agreed, and added that Rosengart must sift through the voluminous amount of medical and legal documents accumulated over the past 13 years, which could be a reason for the holdup.

“I haven't heard anything from either Rosengart or his law firm that they intend to petition the court to terminate the conservatorship,” Rahmani said. “The focus seems to be on replacing the conservator. So I don't think the conservatorship will end any time soon, unless we hear something differently from Britney or her attorneys.”

Spears’ next court date isn’t until late September, Rahmani said he would not be surprised at updates between now and then.

Rahmani added given his understanding of Spears’ case, it would be completely appropriate for the court to terminate her conservatorship, saying the arrangements are “not meant for a 39-year-old woman who’s one of the most successful entertainers of our generation, who just finished a four year residency, who's dropped four albums while she's been under this conservatorship.”

While a concrete resolution in Britney’s case has yet to be reached, her situation has shined a light on commonplace issues affecting many conservatees nationwide.

According to the AARP, a 2018 estimate found nearly 1.3 million Americans were subject to conservatorships — or guardianships, as they are called in some states — although exact numbers are hard to pin down due to differences in reporting mechanisms.

“People that don't have the platform that Britney does don't have the resources that she has, their voices are unheard,” Kaspar told Spectrum News. “I think that's why more regulation needs to be put in place, where [conservatees] can actually have an avenue to voice their concerns.”

For years, activists have called for federal conservatorship reform, with many saying the area is one rife with conflict of interest and malfeasance. The high-profile nature of Britney’s case, coupled with her ardent and vocal fans, created a perfect opportunity to push Congress for such changes.

"We use Britney because of her celebrity because it puts a face and a voice on this because there are thousands, we estimate 10,000 a year victims, who never get talked about in the news,” Rick Black, executive director of the Center for Estate Administration Reform, said at a recent #FreeBritney rally. “No one ever hears about them."

Black is a supporter of the recently-proposed Freedom and Right to Emancipate from Exploitation Act, or “Free Britney” Act, a bill put forward last week by Rep. Charlie Crist, D-Fla., and Rep. Nancy Mace, R-S.C., which the two described as a “first step” in passing conservatorship reform. 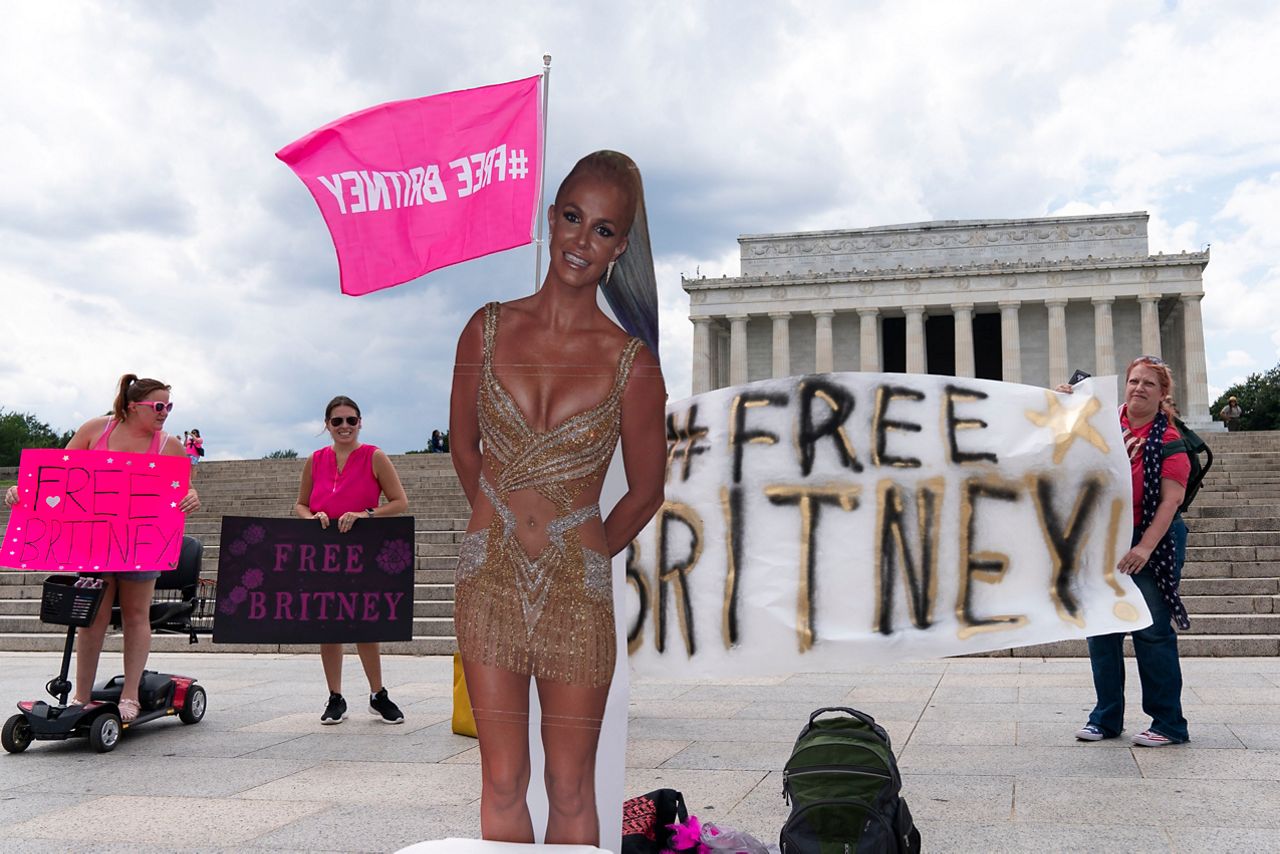 "It was heartbreaking to hear (Britney Spears’) voice describe some of the abuses that she's endured under her conservatorship," Rep. Mace told Spectrum News in an interview last week. "If it can happen to her, it can happen to anyone."

The bill aims to offer conservatees more rights by appointing a state case worker to each individual, and will allow conservatees to petition the court for a state-appointed guardian without having to prove wrongdoing on the part of their current guardian.

The hope, Rep. Crist said, is that the FREE Act will help eliminate the "hodgepodge of guardianship or conservatorship we have in all 50 states."

But the #FreeBritney movement is largely split on the contents of the legislation. Cassandra Dumas, a representative for the Washington, D.C.-based grassroots group Free Britney America, said the bill represents the “first beacon of hope” in conservatorship reform.

“This bipartisan effort is a work in progress that demonstrates the necessary legal reform” to conservatorships as a whole, Dumas added during a press conference announcing the legislation.

Many prominent members of the movement said the legislation does not address the most serious concerns about conservatorships, as it does not offer a pathway out of conservatorships for those subject to them, instead only providing more resources for existing arrangements.

It also offers little in the way of protections for disabled individuals subject to guardianships, who may not be able to voice their concerns to a caseworker.

"This bill would not help Free Britney, it wouldn’t even remove her conservator/father Jamie Spears... it would replace him," Jacob Sandt, a #FreeBritney activist popularly known as "Jakeyonce," told Spectrum News in an emailed statement. "She still would not have her constitutional rights. Even if this law did benefit a conservatee, creating more guidelines for conservators isn’t going to help anything, as long as judges are still free to do what they want without consequences."

"The courts DONT (sic) follow their own rules," Sandt added. "We NEED judges to be held to the current rules that have already been created. Until that happens, there will be no real change."

Federal reform might be difficult because of the hodge-podge nature of conservatorship laws, but some experts are hopeful that statewide lawmakers might take more of an interest in the hotly debated issue.

“In California, I think legislators are going to be concerned with protections and regulations going forward with,” Kaspar told Spectrum News, adding that some people under guardianship, “may not need a conservatorship in perpetuity, which is kind of what the original legislation created.”

“I think what's going to happen is, legislators are going to pass regulations that allow or require people that are conservatees to have more of a voice and what's going on with their conservatorship,” he continued.

Still, conservatorship reform seems to be one of the few bipartisan areas of agreement on Capitol Hill.

In addition to the FREE Act, Rep. Matt Gaetz, R-Fla., penned a letter inviting Britney Spears to testify in front of Congress, writing: “You have been mistreated by America’s legal system. We want to help.”

“We need to come together and to create a federal cause of action, a federal change in the law that will free Britney and the millions of Americans who are impacted by a corrupt guardianship system that empowers people to take advantage of the weak,” Gaetz said during an appearance at a recent #FreeBritney rally in Los Angeles.

And in early July, Sens. Elizabeth Warren, D-Mass., and Bob Casey, D-Pa., penned a letter to Attorney General Merrick Garland and Secretary of Health and Human Services Xavier Becerra asking their respective departments to provide lawmakers with data on conservatorships.

NOTE: This story has been updated to reflect comment from #FreeBritney activist Jacob Sandt, also known as "Jakeyonce."