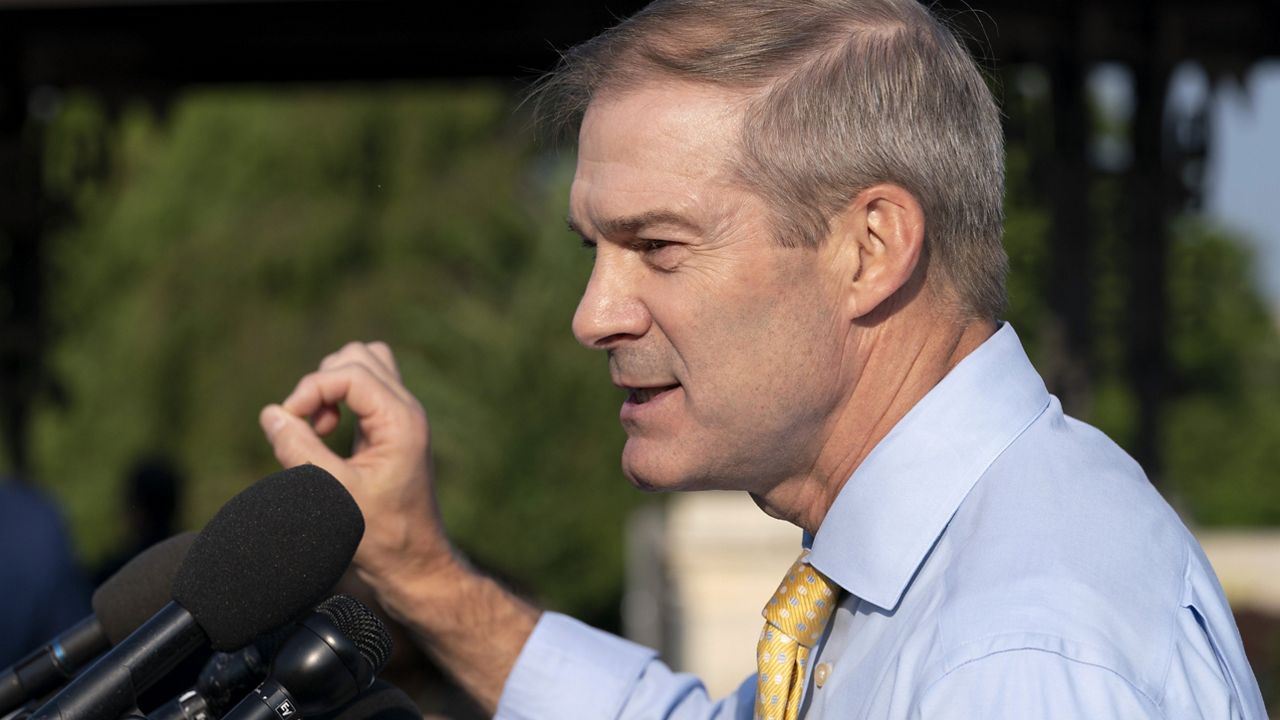 Rep. Jim Jordan, R-Ohio, speaks during a news conference with House Republicans before the start of a hearing by a select committee appointed by House Speaker Nancy Pelosi on the Jan. 6 insurrection, at the Capitol in Washington, Tuesday, July 27, 2021. (AP Photo/Jacquelyn Martin)


In one, he’s a Republican superstar who’s raising millions of dollars, heading to Iowa in September to headline a GOP fundraiser, and releasing a book in November.

In the other, he’s being talked about as a potential material witness who could be subpoenaed by the new committee investigating the Jan. 6 Capitol attack because of his conversations with then-President Donald Trump.

On Wednesday, in an interview on Zoom, Spectrum News asked Jordan if he would agree to testify, were he to be asked or subpoenaed.

Ohio's @Jim_Jordan confirms to me:

Before, during or after attack?

Jordan was originally chosen by House Republican Leader Kevin McCarthy to serve on the Jan. 6 select committee, but House Speaker Nancy Pelosi blocked him once he criticized it as “impeachment round three.”

As the investigation gains steam, there are renewed questions about whether Jordan spoke with Trump on Jan. 6.

He confirmed to Spectrum News that he did talk with Trump, but he couldn’t confirm if it happened before, during or after Trump supporters swarmed the Capitol hoping to stop Congress from certifying that Joe Biden won the election.

If he gets subpoenaed, Jordan said that could lead Congress down a dangerous road where Republicans will try to fight back and investigate Democrats they have questions about.

But through all this, Jordan insists he did nothing wrong, and he continues to defend Trump.

Jordan was asked why he thought people showed up at the Capitol and ultimately ended up attacking it and what their motivation was that day.

“You’d have to ask them. What I know is the former president’s not to blame,” he replied.

Jordan’s popularity in Republican politics is at an all-time high and he still speaks frequently with Trump.

But he said if Trump runs again in 2024, he’s not interested in being his running mate.

Jordan also claimed to have no desire to challenge McCarthy, the House Republican leader, for House Speaker if Republicans win back the House next year after having challenged for the job in 2018.

The longtime congressman said his goal is to become chair of the House Judiciary Committee, where he would lead the hearings he’s become known for making headlines in.