Everyday Hero: There’s a place for graffiti in Portsmouth, and it's drawing in artists from around the region

PORTSMOUTH, Ohio — Ron Williams knows his style. His medium is spray paint, his canvas is a wall and when he puts the two together, it feels liberating.

The trouble is there are only so many walls to paint and what some call art, property owners may call vandalism. With a wife and kids, Williams didn’t want to risk painting the illegal way, so instead, he built his own space. 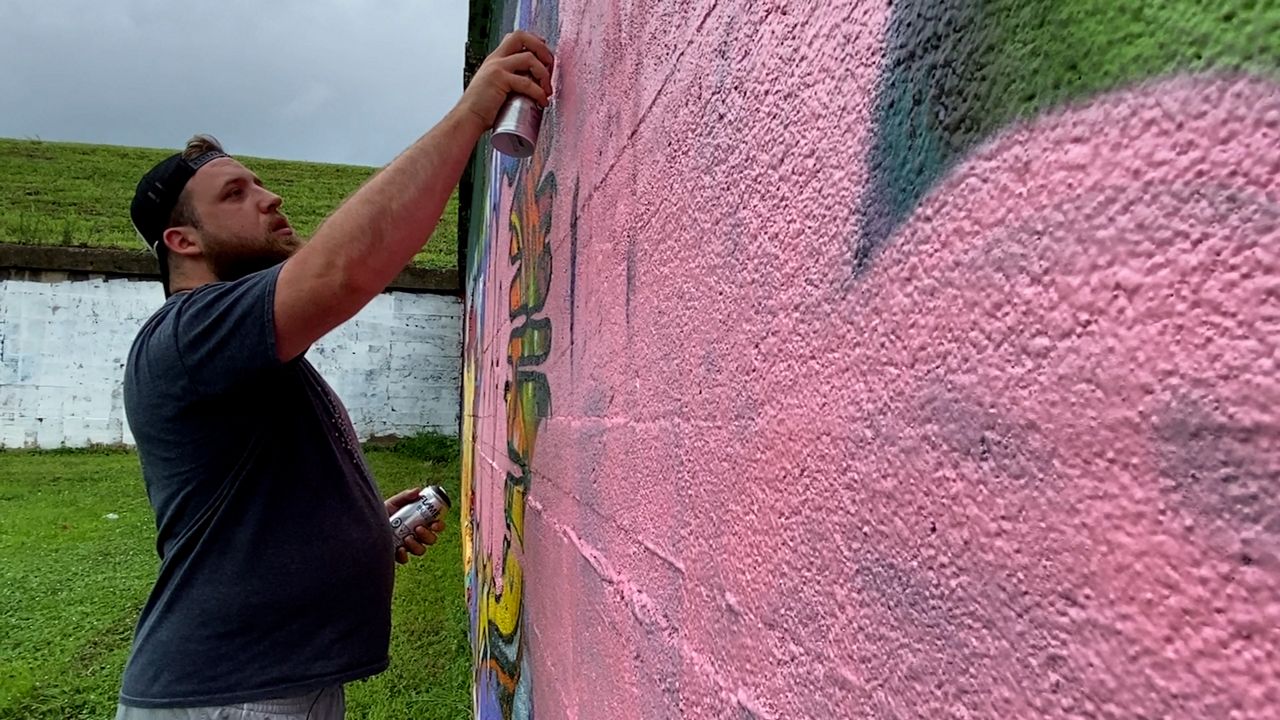 Williams paints on the public wall

The Portsmouth Street Art project opened their public wall on Offnere Street in February for any interested artists to make their mark.

Months later, the flood wall is covered in countless coats of paint, dozens of designs from artists across the region, all due to Williams' efforts.

“I started with the city council. I went in and asked them for a spot where people can go and paint,” he said.

Williams thought they’d turn him down at the first mention of graffiti. Instead, they surprised him.

“They liked the idea, and they asked me to develop it,” he said.

From there, he started doing research. Williams scouted locations around Portsmouth and looked into what other cities did for public graffiti walls.

“Turns out there’s not very many,” he said. 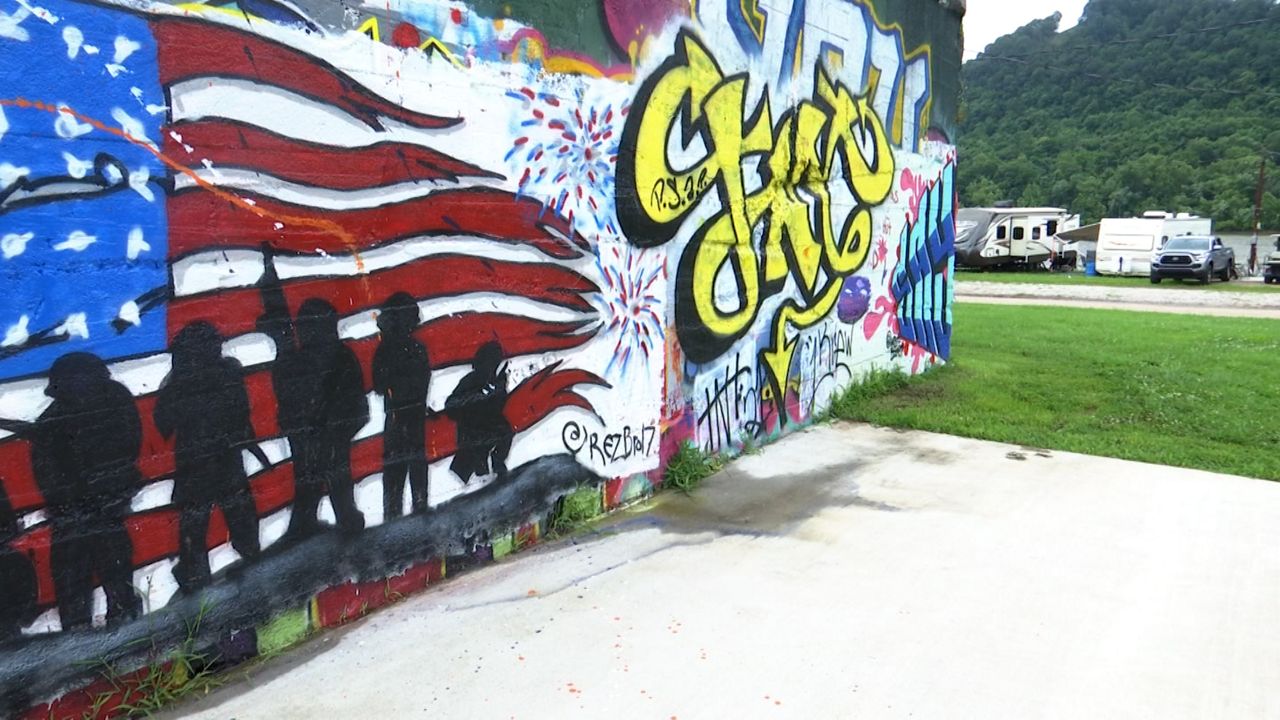 There are a handful across Ohio, but Williams found most were privately-owned or temporary, on buildings set to be demolished. He wanted a place that would be permanent, public and maintained to show this style of art deserves as much respect as any public art form.

“It’s stigmatized,” he said. “And that’s kind of like what my main goal is to open up people’s minds about what graffiti is, what it could be rather than the negative part of it.”

That’s why Williams didn’t stop at a wall. He registered the Portsmouth Street Art Project as a nonprofit, the first of its kind in Ohio. That opened the door to grants to help maintain the wall and buy paint for aspiring artists and future projects.

Willams handles the upkeep for now and making sure those who come out to paint follow the few rules he has. Keep any images and words family-friendly and paint only in the designated spaces.

“Have it inviting rather than pushing people away,” he said. “That’s the opposite of what this whole program is about.”

Williams also wants every artist to know, whatever they put on the wall, won’t be permanent. Artists are free to paint whatever and wherever they want, which means work might last for a few weeks or a few hours. He said that’s because the purpose isn’t to highlight any single artist’s work but create a sort of sandbox or sketchbook for artists to experiment and learn.

“I mean, that’s kind of what it’s about,” he said. “Just doing what you do and sharing it with others, even if they don’t know who did it.” 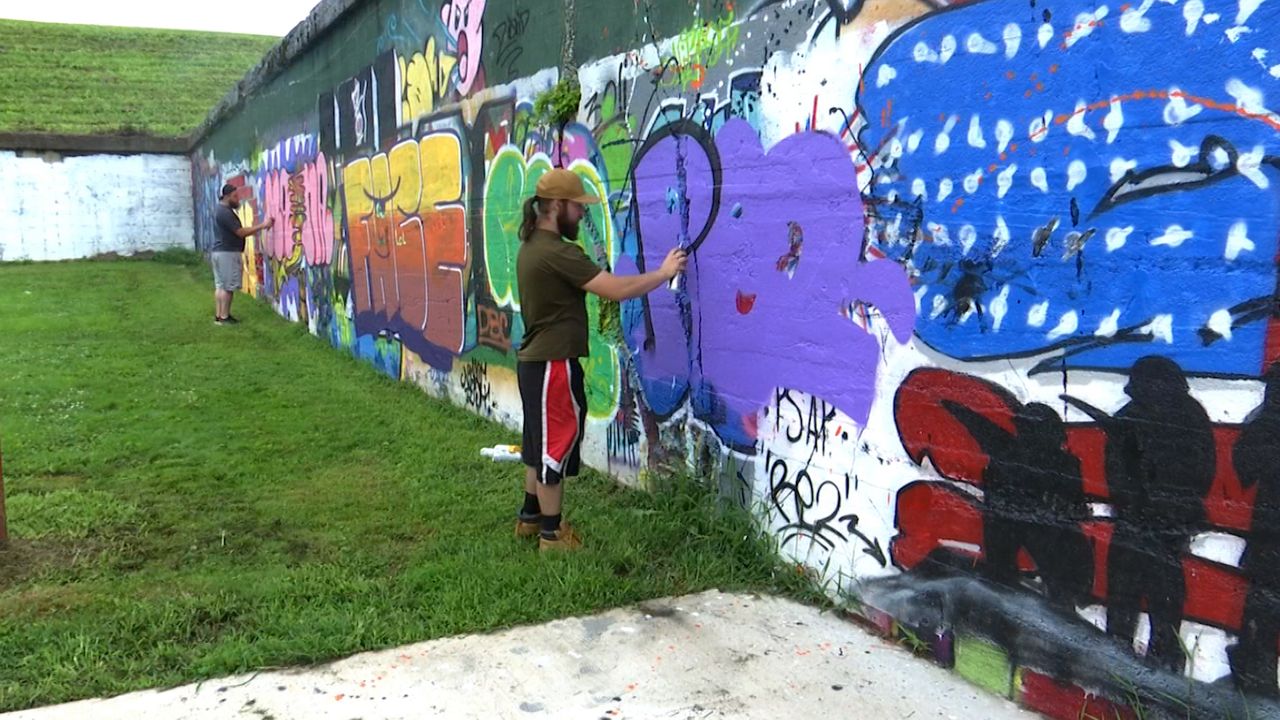 Chris Blevins, a Portsmouth street artist, said he’d taken a break from painting but the wall gave him the opportunity to get back to form.

“A lot of it is like trial and error,” he said.

One of his favorite reasons to come down to the wall is to see the creations from artists around the tri-state area.

“That one’s from Huntington and this one, the light and dark blue one was from I think Cincinnati?” He said pointing out some of the works along the wall.

Williams said he didn’t expect his wall to catch on so quickly with out-of-state artists, but he’s grateful it has. As he continues to expand the project he hopes it continues to be a destination and an outlet for artists throughout Southern Ohio and beyond.

Williams said in the coming years he hopes to add more walls around the city to the street art project. He already has agreements with some local businesses to use some of their walls as authorized street art spaces.