LOVELAND, Ohio — Wandering the narrow aisles surrounded by animal skulls, visitors may find themselves face to face with a two-headed sheep, a musty collection of coins or a vulture perched next to a taxidermy giraffe, keeping watch over the rest of the treasures.

This is just the front room at Memento Mori, an oddities store in the heart of Loveland. For much of the pandemic, it has sat closed, then opened only through appointment. Now as travelers return, it's regaining the notoriety it’s built over the past decade. 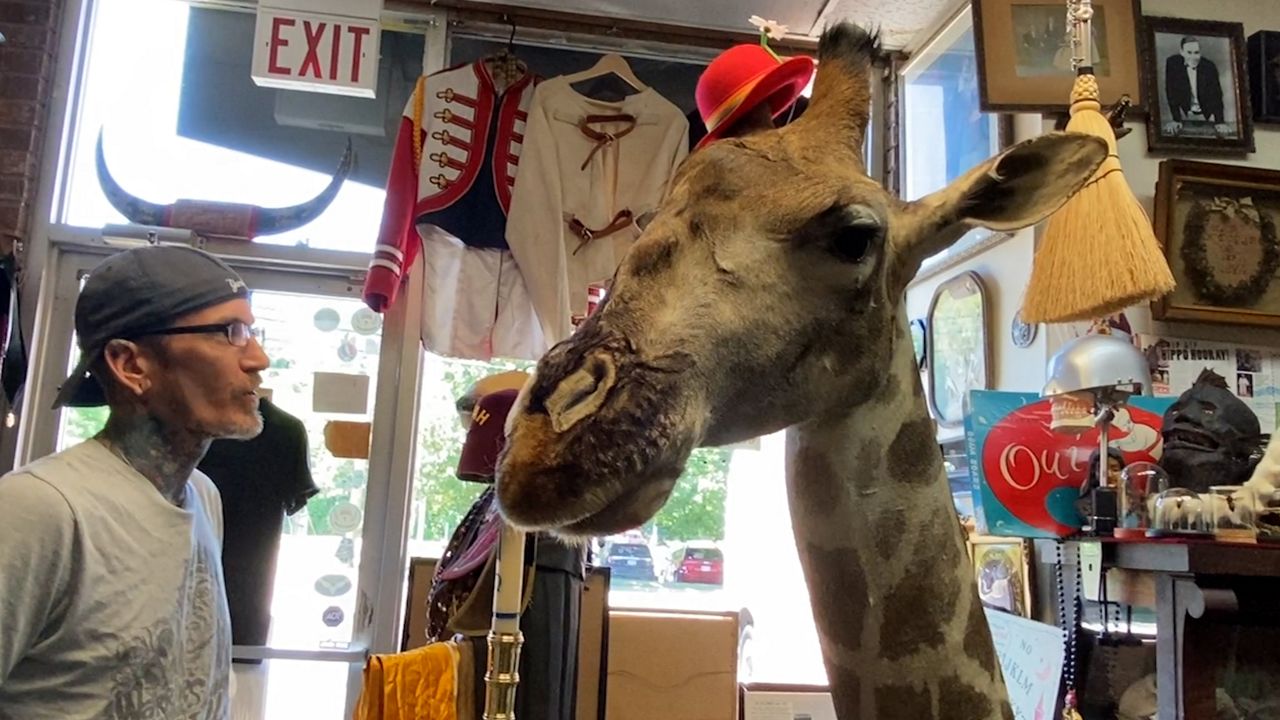 Once per week, owner Greg Johns tends to his most delicate collectibles.

"This giraffe is a vintage giraffe. It’s been around a long time,” he said, dusting its fur. “Don’t let people touch it. That’s why he’s stayed so nice for so long.”

The taxidermy giraffe has somewhat of a cult following in Loveland, much like the store it sits in: Memento Mori.

“People have come in here just to take pictures with it. In fact, a couple got engaged, right here in front of the giraffe,” Johns said that was only a few months ago. “That was one of the best things that’s happened in here.”

It happened shortly after the store opened up to walk-in visitors, and since then, Johns said he’s seen an uptick in folks interested in checking out the collectibles and one-of-a-kind items his store has to offer. 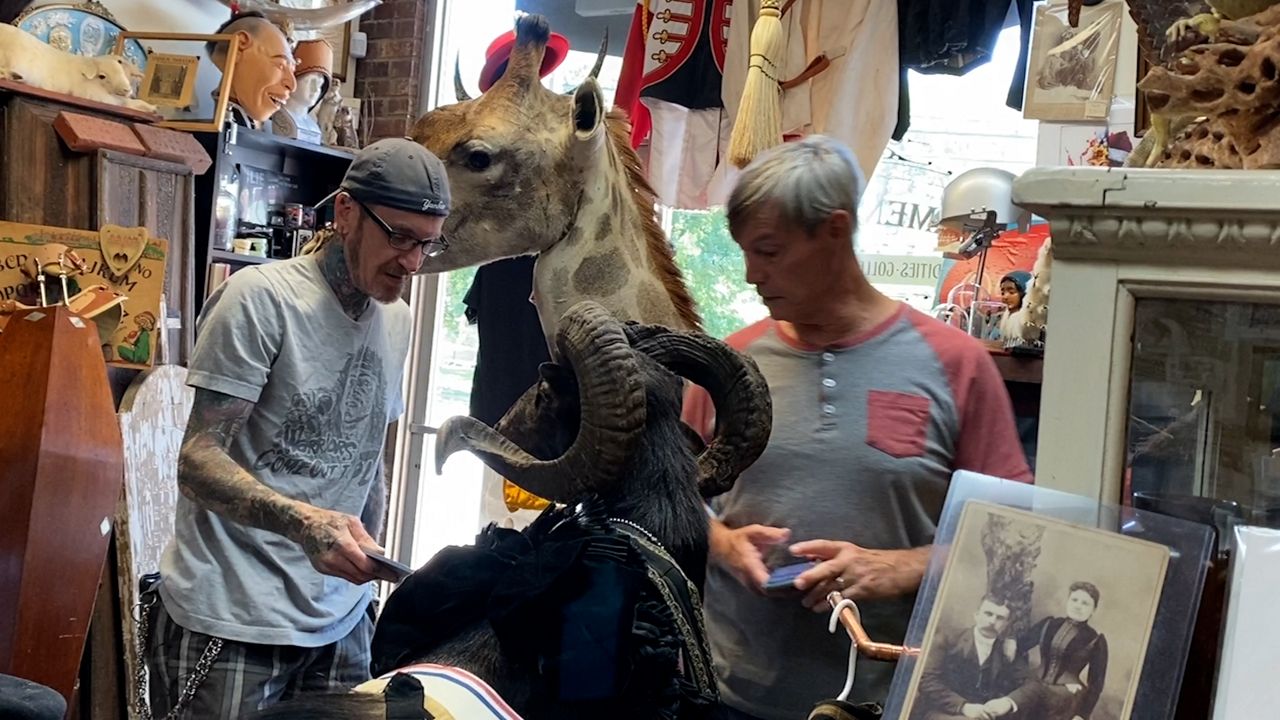 Johns shows a customer around the store

“When it’s rainy out, people get busy,” he said. “Looking for something to do.”

Memento Mori offers plenty to keep people interested. Johns said many treat his place like a museum, but the more people coming in, the more sales he makes.

“You never know what you’re going to buy in here,” he said. “I’ve had guys walk in here looking for one thing and they walk out of here with something they’ve never even seen before.”

Johns said he’s always had an interest in keeping more eclectic things on his shelves.

“I was never into the toys like most kids were into. I was into the monster toys like that stuff,” he said. 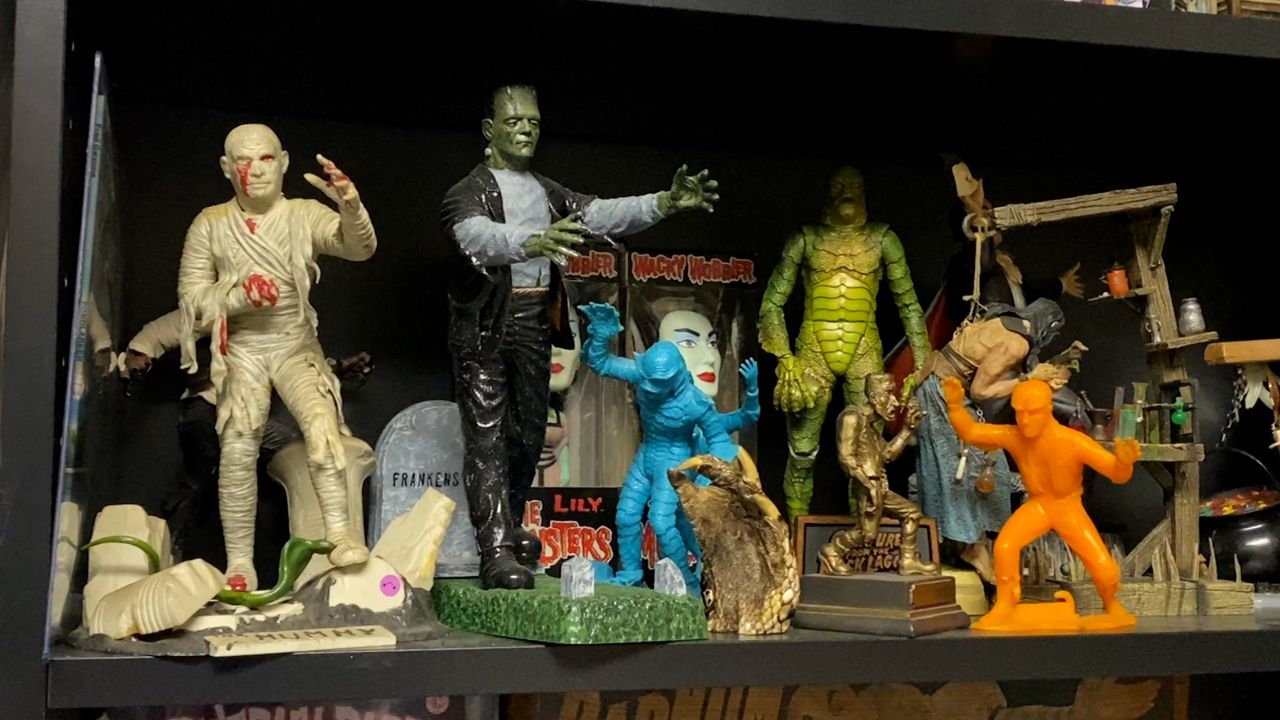 From there, he said his collection grew and he fostered connections with other collectors across the country, eventually building up enough to fill a store people need to see to believe.

Besides the taxidermy and skulls though, Johns said he makes sure to offer some of the more traditional collectibles. His store also has figurines, autographed photos and movie memorabilia.

“This is the original Star Wars Laser Disc,” he said showing the product to a customer. “This is a one-of-a-kind piece.”

Before the pandemic Johns said he had visitors from all over, now it’s working to build back that tourism customer base.

“This place is a destination,” he said. 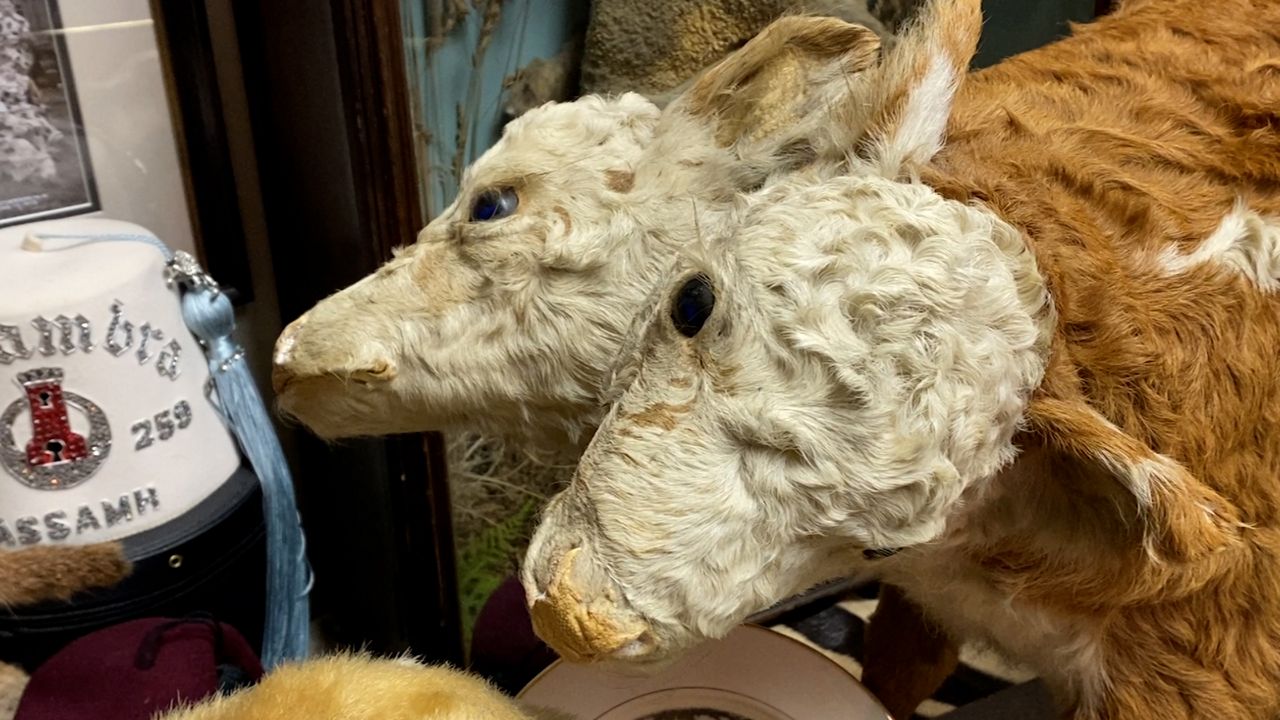 In the past few months, Johns said he’s seen visitors from Michigan and Chicago and he hopes that momentum continues all summer.

The store is built on our attraction to the bizarre and with a selection you need to see to believe, Johns said making a sale is as simple as getting the right person to walk through the door.

“Some person’s junk is someone’s collectible,” he said. “Everyone’s got their own taste.”