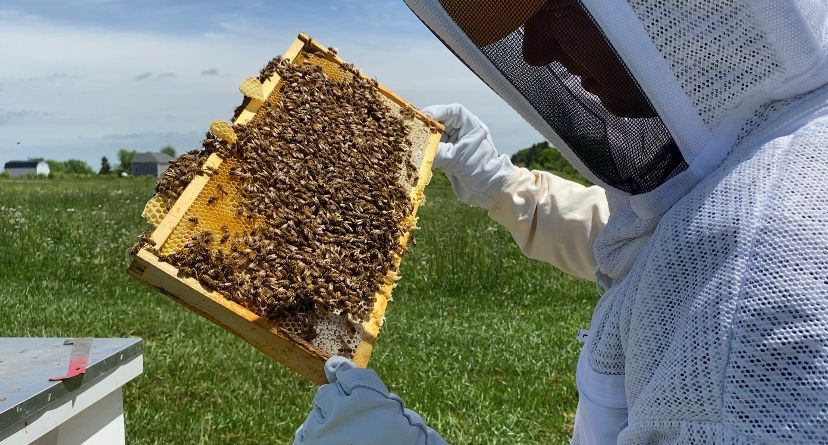 You might find a swarm of honey bees on your property this summer. Here's what you could do

CLEVELAND — Around one-third of the food we eat is pollinated by bees and they contribute billions of dollars to our nation's crop values yearly, according to the USDA.

Mike Malainy is the owner of Malainy Honey Farm, so he understands the importance these pollinators play in our ecosystem.

Malainy also believes that spending time with honey bees is not only beneficial for the environment but also good for the soul.

"I find that they’re like a Rubik's cube," Malainy said. "You get them all squared up, you turn your back and then it's all messed up again.”

He said beekeeping has helped give him a mental break from his full time job as a police officer.

“I’ve been a police officer for 17 years,” Malainy explained. "Unfortunately, in 2018, my coworker was killed on a traffic stop and I investigated his death with some of my other coworkers.”

Malainy put more time into to beekeeping after that tragedy to help him cope with the loss.

"The night before my coworker was killed he actually asked to buy honey from me," Malainy said. "I never thought to sell it, but that spurred the idea for the Malainy Honey Farm.”

Now, he not only sells honey, but he also rescues swarms of honey bees from people's property.

If you see a swarm, Malainy urges you to call a beekeeper. He suggests going to Ohio Beekeepers on Facebook to find someone local to remove the bees.

“I don’t want anyone, please, do not spray them. These are pollinators. They carry the weight of the world on their back,” Malainy said. “We will come, put them in a box and we will take them to our farm where they can live with the rest of the bees.”

Unlike exterminators, beekeepers generally remove the bees for free.

“They are not going to charge you to go pick up a swarm," he said. "They will get them out of your place, where you don’t want them and bring them to somewhere they can live in perpetuity.”

"They are very complex little creatures," Malainy said. "I think they are the most fascinating creatures on the planet.”