HAMILTON, Ohio — Long waits, help wanted signs and busy kitchens have been the norm at restaurants across Ohio all spring. Demand for hospitality has been on the rise as the vaccinated population increases and as restaurants prepare to open to full capacity, many have struggled to find the staff they need.

The Hamilton Area Chamber of Commerce wanted to make things easier for bars, restaurants and hotels in the region so they set up a one-stop shop application for prospective employees and hiring managers. A month into the process, the earliest hires are getting to work. 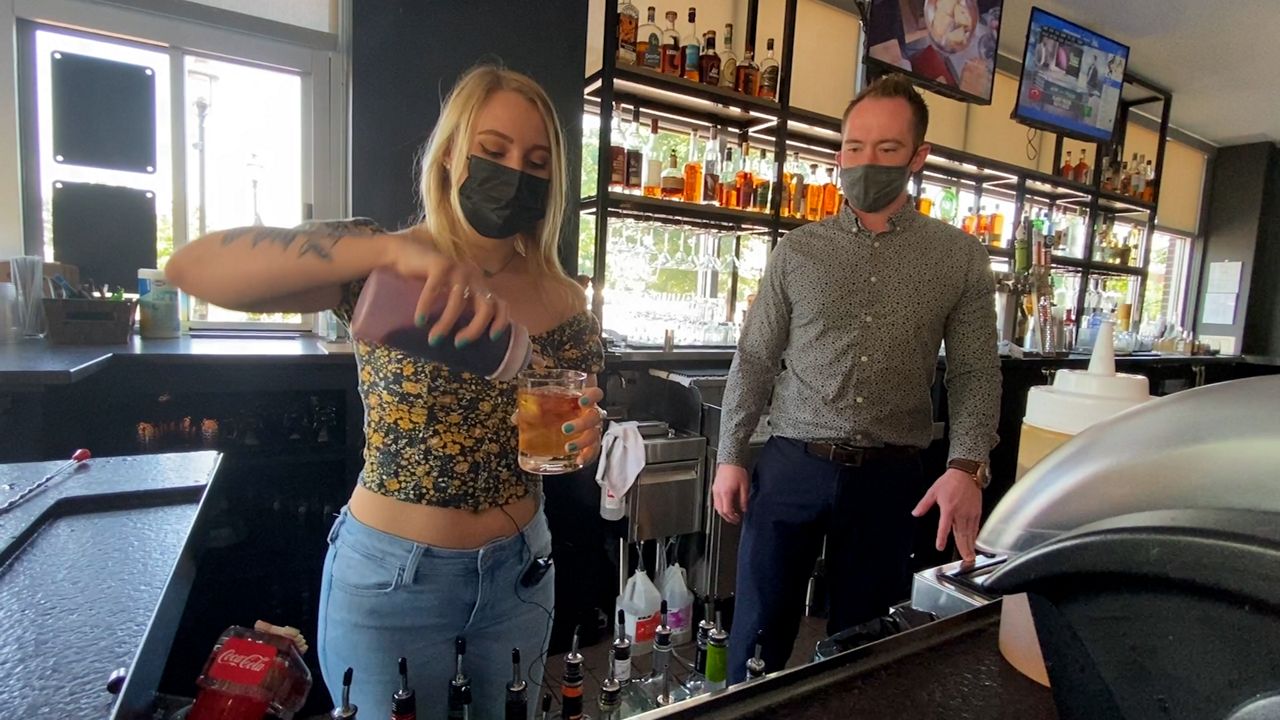 Stitzel trains at the bar

A few weeks into her new position, Gracelyn Stitzel is confidently reciting the menu, seating guests and navigating the dining room at Tano’s Bistro, though she still has a bit to learn about mixology.

“I’ve done a little bit of bartending but I don’t have this kind of experience,” she said.

Fortunately, with the guidance of Tyler McCleary, the director of operations, Stitzel quickly made it through training and is helping the restaurant catch up to the summer surge in customers.

In many ways, McCleary said Stitzel would have been an ideal candidate any year.

“I’ve been a server for two years. I’ve worked in restaurants for five years,” Stitzel said. “Basically since I turned 16.”

This year though, that kind of experience is in high demand at nearly every bar and restaurant in Hamilton, so the Chamber of Commerce wanted to make things a little less competitive and allow the hospitality industry more room to cooperate. 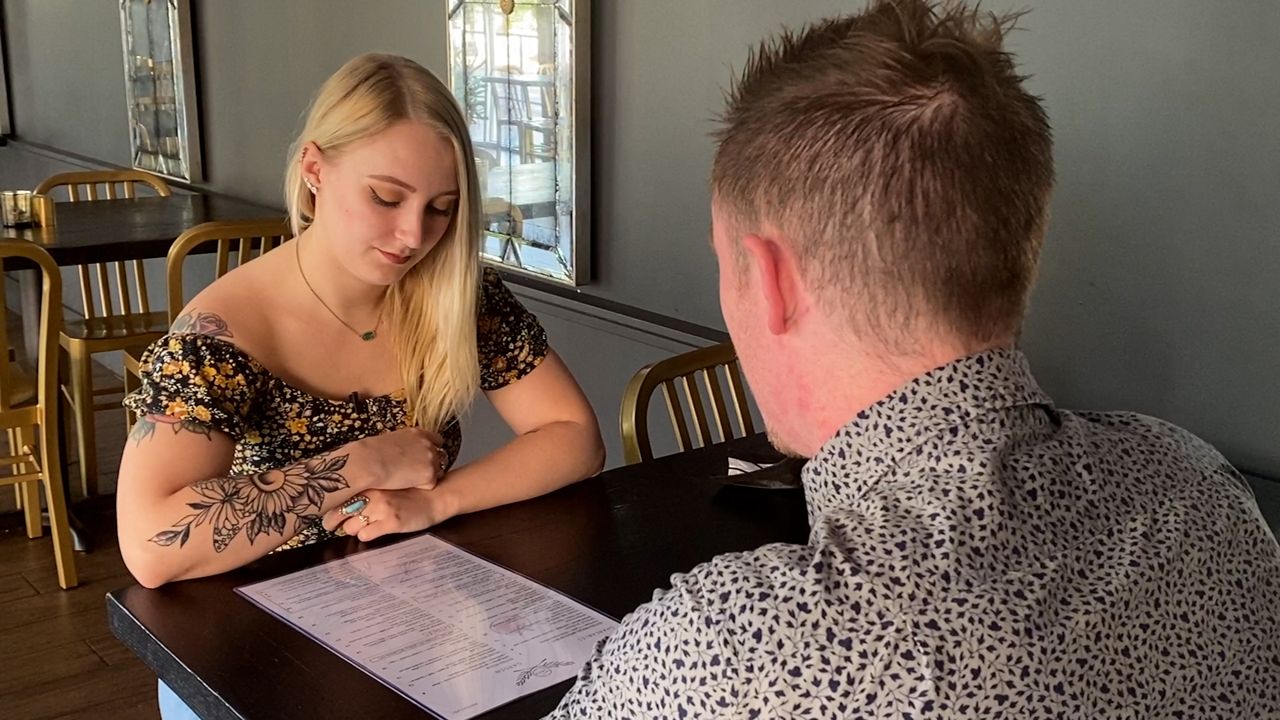 Stitzel goes over the menu with McCleary

They opened up the Hamilton Amusement and Hospitality Association of HAHA portal to allow applicants the chance to reach all the hiring managers in the area at once, with one quick application.

Stitzel said it couldn’t have been an easier process. Within days, she said she got the call from Tano’s Bistro and by the end of the week, she was working.

“It’s been awesome so far. I’m really happy with how it turned out,” she said.

As for the hiring managers, McCleary said he’s been impressed by the opportunity the portal’s opened up for cooperation. The managers have been able to discuss the possibility of sharing part-time workers so they can get the hours they want between multiple places of employment. 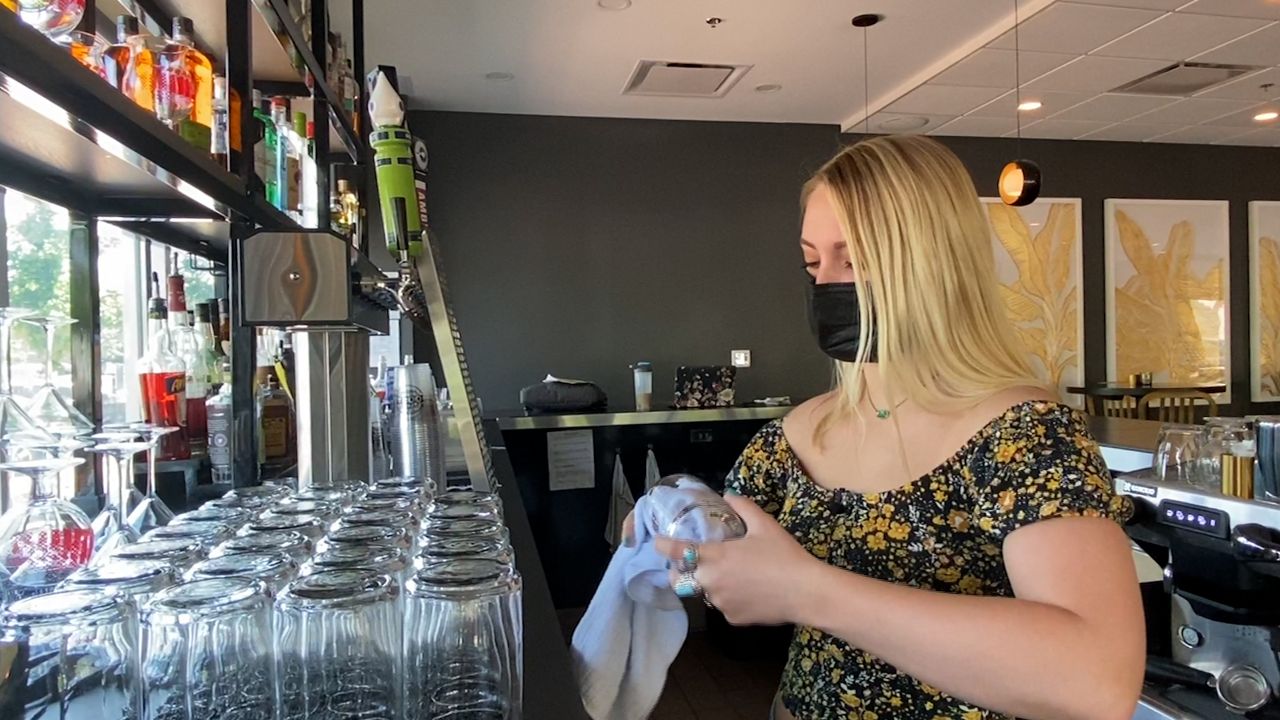 “It’s a one-stop shop for everyone who’s looking for a job, an outside-the-box idea,” he said. “We’re not really stealing staff from each other; we’re more really seeing, OK, who needs what and how do we divy up the staff that’s available to everybody?"

A month into the process, there are eight area bars, restaurants and hotels on the portal. McCleary said Stitzel’s just his first hire, but he’s been sorting through a stack of applicants to interview since.

“This isn’t gonna be fixed overnight, by any means,” he said. “But I feel OK. The constant even pressure should be enough to hopefully get not just Tano’s Bistro but the entire restaurant community here and hopefully the entire Greater Cincinnati back to where to was before COVID.”

Ideally, McCleary said places like Tano’s Bistro need long-term, full-time employees they can rely on year after year, but the more applicants he can get in the door, he said the easier those workers will be to find.