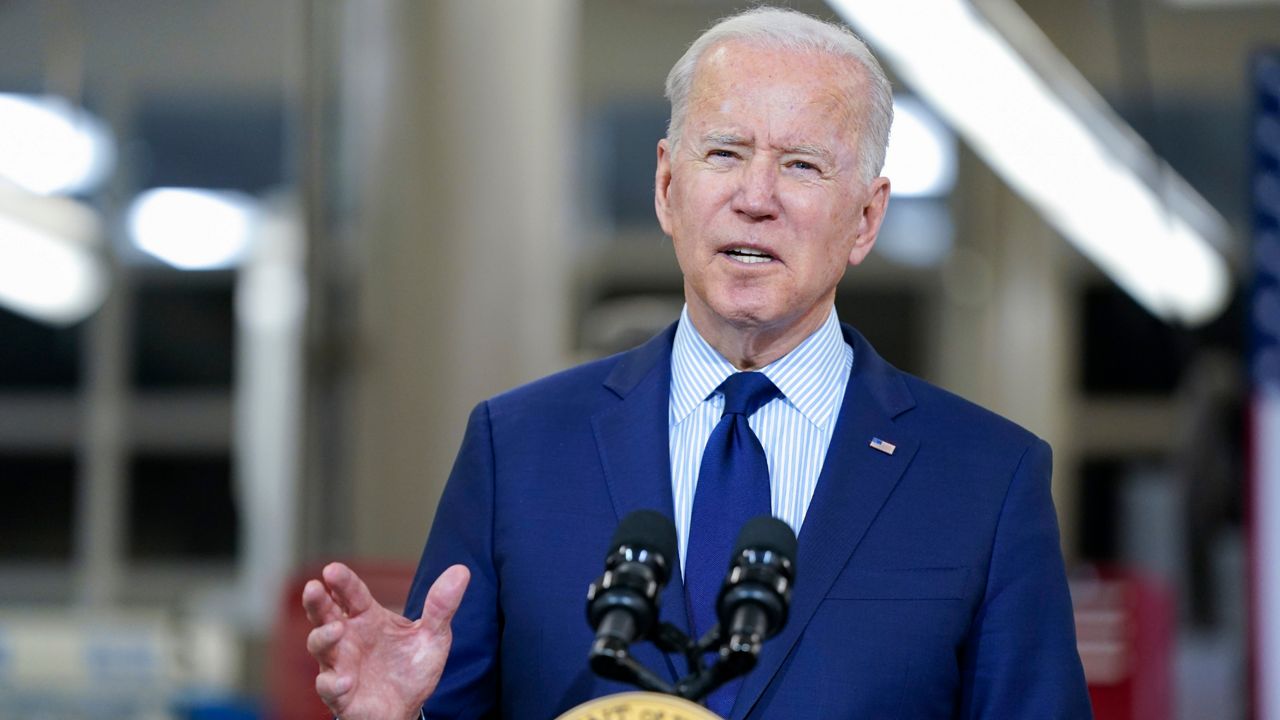 CLEVELAND — When President Joe Biden took the podium at Cleveland's Cuyahoga Community College on Thursday, the events of March 10, 2020 seemed to be fresh in his mind — it was the site of the last rally he was scheduled to hold before the COVID-19 pandemic shut down the country.

"There would be no rally that night,” Biden said Thursday. "Life in America had changed, and a long, dark year was about to descend upon all of us."

Biden, and fellow Democratic candidate Sen. Bernie Sanders, canceled their respective rallies in Ohio that night. The next day, the World Health Organization declared COVID-19 a pandemic, the NBA suspended operations, and gatherings throughout the nation were being canceled as the pandemic brought a halt to every day life.

“Certain places just by chance and circumstance can become markers over the course of your life and the course of the nation,” Biden said on Thursday. “For me, [Cuyahoga Community College] is one of those places.”

Fourteen months later, Biden returned to that very site, promoting his plan to rebuild the economy that has been trying to rebound from the devastating impacts of the COVID-19 pandemic.

“Fourteen months later, we finally made it to campus,” the president said. "After a year of darkness, we're now emerging in the light."

He toured Cleveland’s Cuyahoga Community College before delivering a speech.

“COVID cases are down, COVID deaths are down, unemployment filings are down, hunger is down,” Biden said. “Vaccinations are up, jobs are up, growth is up, people gaining health insurance is up, small business confidence is up."

We’ve turned the tide on a once-in-a-century crisis. pic.twitter.com/zT9Lxjdsww

"To put it simply, America is coming back, America is on the move,” Biden added. “That wasn't an accident. It wasn’t luck.”

The president took aim at Republicans in Congress who voted against his $1.3 trillion COVID relief bill, the American Rescue Plan, but tout its benefits to their constituents.

“Even my Republican friends in Congress, not a single one of them voted for the rescue plan,” Biden said. “I’m not going to embarrass any one of them, but I have here a list of how back in their districts, they’re bragging about the rescue plan.”

True to form, Biden pulled out a list of such Republicans, garnering laughter from the gathered crowd.

“Some people have no shame,” Biden continued. “But I’m happy. I’m happy they know that it benefited their constituents. That’s okay with me. But if you’re going to try to take credit for what you’ve done, don’t get in the way of what we still need to do.”

Every Republican in Congress voted against the relief bill in both the House and the Senate, but a number of lawmakers have celebrated its benefits, including the Restaurant Revitalization Fund, which has provided critical aid to restaurants, bars and other establishments.

Biden said that emphasizing vaccinations and providing direct aid to families was key toward an economic rebound. But he said the work is not over.

Biden, backed by signs that read “Blue Collar Blueprint for America,” pledged to continue the work that the COVID-19 relief bill started in order to "rebuild an economy from the bottom up.”

“The Biden economic plan is working,” Biden claimed, adding: "And now we're faced with a question. What kind of economy are we going to build for tomorrow? What are we going to do? I believe this is our moment to rebuild an economy from the bottom up and the middle out.”

His speech came as he is attempting to pass a sweeping infrastructure bill that currently faces a stalemate in Congress.

“We’re in a race to see who wins the 21st century,” Biden said, calling the United States’ economic policy “the basis of foreign policy and our stature in the world."

"We must be number one in the world to lead the world in the 21st century,” he added. “It’s a simple proposition.”

On Thursday, Republican offered an infrastructure bill of their own at a price of $928 billion, up from the $568 billion they initially proposed, but still far under the $2.3 trillion Biden initially proposed, as well as the $1.7 trillion counter-offer Biden presented.

"We believe this counteroffer delivers on what President Biden told us in the Oval office that day and that is to try to reach somewhere near $1 trillion over an eight year period that would include our baseline spending," Sen. Shelley Moore Capito, R-W.Va., one of the chief GOP negotiators, said at a press conference Thursday.

Republicans have offered to increase spending for road, bridges and major projects by $91 billion to $506 billion, the single largest spending item in their plan. The GOP offer also raises spending on water resources by $48 billion, on airports by $25 billion, on broadband by $65 billion and on passenger and freight rail by $22 billion.

Speaking to reporters on Air Force One Thursday heading to Ohio, White House press secretary Jen Psaki signaled a willingness for more conversations: “Our focus is on continuing to work, on having these discussions and negotiations through the course of next week again."

“There are a number of Republicans who have come forward with ideas,” she added. “We have a counteroffer on the table, where the number came up significantly from the prior offer, where there was an increase in proposed funding and roads, rails and bridges.”

Psaki looked ahead to June 7 — when Congress comes back to Washington — as a date for negotiations to progress, though she said there isn’t a concrete deadline the administration would give up on a bipartisan deal.

Asked whether the White House objects to using the remaining COVID-19 relief funds for the package, the press secretary didn’t outwardly object, instead noting that most of the money had already been allocated.

“His only red line is inaction,” she said.

Biden concluded his speech in Cleveland by saying that his economic plan that “this is an opportunity for the wealthy to stay wealthy, the poor to have a shot in the middle class, and the middle class able to breathe more easily.”

“That’s what this is about,” he concluded. “But this time, bring everybody along. Everybody."