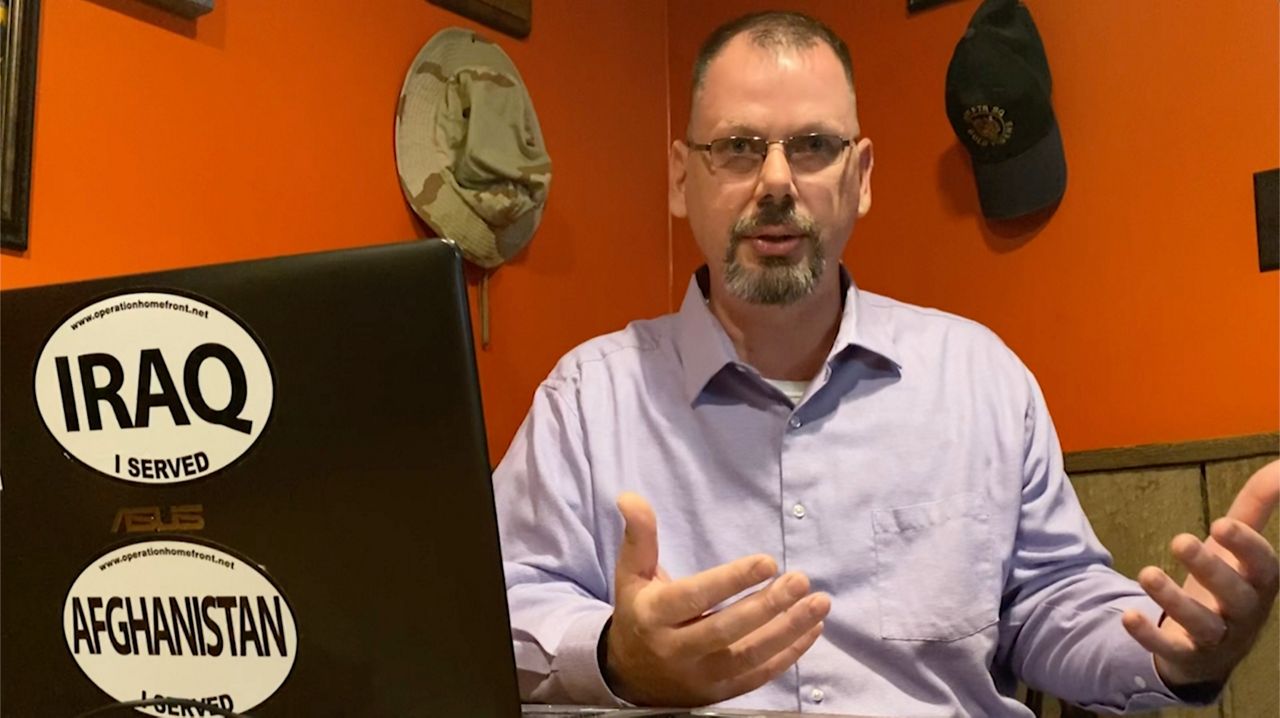 COLUMBUS, Ohio — Veterans returning from war face a number of struggles. That’s why some end up facing homelessness, PTSD or even contemplating suicide. Some also end up behind bars for crimes.


As he explains it, when someone enters the military, and especially if they have to deploy for war, they are forced to learn how to succeed in a whole new world. It’s a very structured world where everything is decided for them.

They also have an army of military brothers and sisters that they live and work with and lean on, but when they come back home to be a civilian, all of that is taken away.

It’s that rough transition that Parkins is fighting to eliminate.

“This is my buddy, Nate Siltman, he's dead,” Parkins said as he looks through a photo album from his time in the service. “He died by overdose in 2017 and he called me a couple of months prior, and he told me the same story I was sharing about myself, about being lost and needing help. And then his daughter's husband contacted me and said, ‘Did you hear about Nate?’ and I said ‘No,’ and they said ‘Nate died.’”

A haunting memory that now is part of an album of ammunition to motivate Parkins to protect any other veteran from a similar fate.

He left the Air Force in 2005 as a staff sergeant and a veteran of the wars in Iraq and Afghanistan.

Parkins spent eight years serving, but when he came back, he said over and over again that he felt completely alone and family and friends didn’t understand.

"I started going to the bar and getting drunk and I was getting in bar fights, you know, I got a DUI, I did all these things,” he said. “Then I was going to jail, almost every weekend. It was hell. I felt like I was on an island by myself and the waves were coming in or the tsunami was coming in and it was just a matter of time before I was dead.”

His mom got to the point of kicking him out of her home.

“She looked at me one day and she said, ‘I want my son back’ and I told her, I was like, ‘That guy's dead,’” he said. “Because you're not the same person. When you join the military you get built into this machine they need, right, But when you go to the come home, it's, ‘I’m done with you.’ Nobody is teaching us how to come home.”

It would be his second wife, Misty, and the birth of their kids that turned into his wake-up call.

Parkins went back to college and began working in corrections. At a halfway house is where he found so many veterans with similar stories of despair and getting in trouble.

“They've been willing to write a check payable with their life for their country,” he said.” “They're above what's happened, they proven that.”

In 2019, he was finally able to launch his nonprofit organization called Dress, Right, Dress, which is a play on a military command to keep soldiers in line.

Their first program did just that, focusing directly on helping veterans dealing with the criminal justice system. That program is called Justice Involved Veterans and Mentors (JIVM).

“It's a reestablishing that sense of pride they had when they joined the military,” he said. “The numbers that I crunched were roughly 85-90%. When you talk recidivism, that's unheard of.”

The organization’s foundation is peer support and recreating that military family with veterans who understand each other.

Mentors, like Parkins, volunteering their time to help others navigate coming home.

“We can be very dysfunctional individually, but you put us together, we're going to get stuff done,” he said. “It's about us helping each other. It's about our veterans, myself included, watching out for the next guy."

All programs are completely free to veterans, meaning Parkins, who works 40-60 hours per week, isn’t paid a dime. He works completely as a volunteer. ​