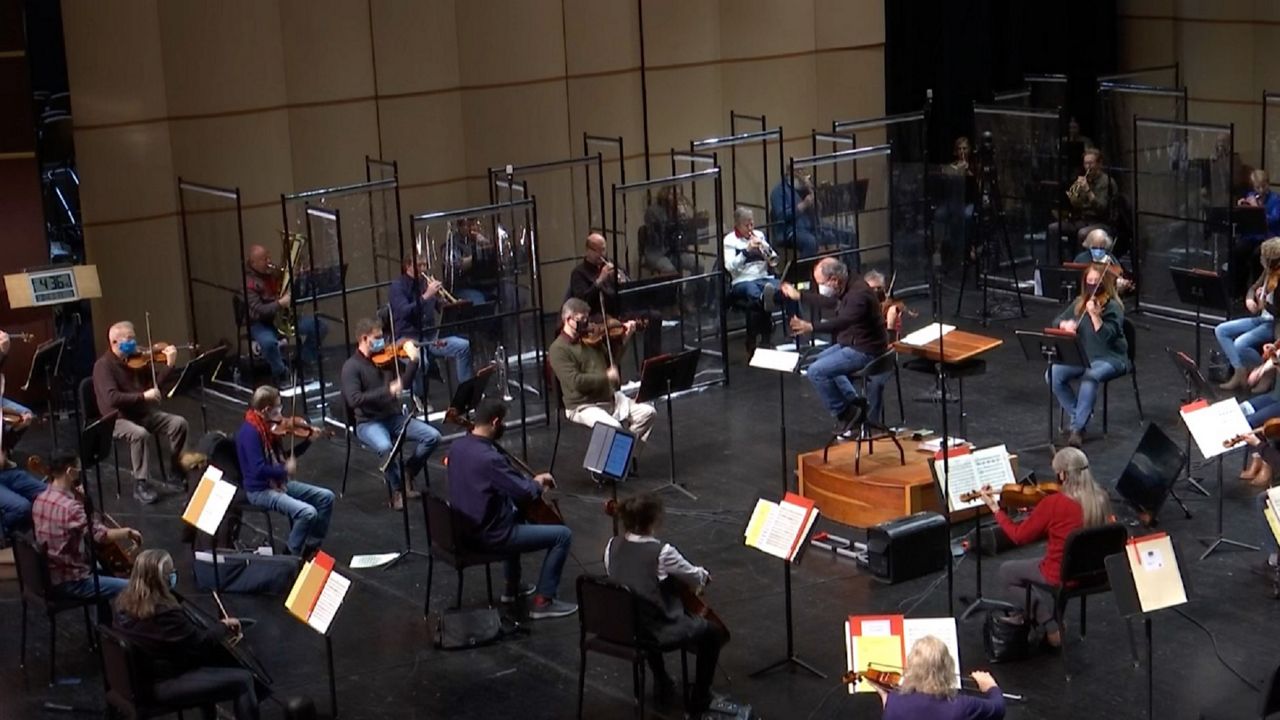 Dayton Philharmonic to Return to the Stage with In-Person Concert

DAYTON, Ohio — Due to the coronavirus pandemic, 2020 was a quiet year for musicians across Ohio, but many are hoping to start 2021 with a little more music.

The Schuster Performing Arts Center in Dayton hasn't seen a full audience since early March when it cancelled a series of concerts on a day’s notice. At the time, Dayton Philharmonic artistic director Neal Gittleman said he didn't know how monumental the decision would be.

“We had a Thursday kiddie concert, magic carpet concert that the orchestra played and we were supposed to play the final show of that run on Friday but it didn’t happen,” he said.

Gittleman said the orchestra didn't come together until the summer to record concerts, but New Year's Eve, the musicians got their first taste of what it's like to be back under the lights for a live show.

“Everything we’ve done so far that’s been streaming has been filmed and then there’s been a post-production period and then it goes up," he said. "This is the first time we’re doing any live streaming, so hopefully everything works and the Internet is up and everything is good.”

It's a simple change, but one Gittleman said that makes all the difference.

“Just having some people out there that, you know, are listening to us, I think will make a big difference to everyone," he said.

Gittleman said his performers get their energy from their audience, and while live-streaming is a big step forward, nothing can compare to hearing the sound of applause.

“One of the most awkward things in all the streams that we’ve done so far is the moment at the end when we have them get up and stand and do a bow for the audience we can’t see," he said. "What usually motivates us, and is the soundtrack there is the applause.”

The Philharmonic will get the first chance to hear that applause Saturday, Jan. 23, when it’ll perform its first in-person concert as Gittleman sets the stage for what their performances will look like going forward.

One of his plans is a normal 2021 season by the fall, with shorter concerts to finish off the 2020 season this spring. Saturday's concert is an example. The Philharmonic will play two shortened concerts back to back in front of a limited-capacity audience instead of a usual concert length and full house.

Gittleman said he's prepared to extend those shortened concerts indefinitely, but ideally, he wants to see how close to normal things can get by the end of the year.

“At some point, we’ll have to make the decision which format we’re going to go with, but until we’re forced to make that decision by events, we’ll just kind of go and cover our tracks,” he said.

After a difficult year, Gittleman said Dayton deserves a little music and it's time for his performers to get back to work.

“Art isn’t easy. It never has been, it never will be. There will always be problems that you have to overcome," he said. “It's our job to come up with creative solutions to problems and let the art still come out.”