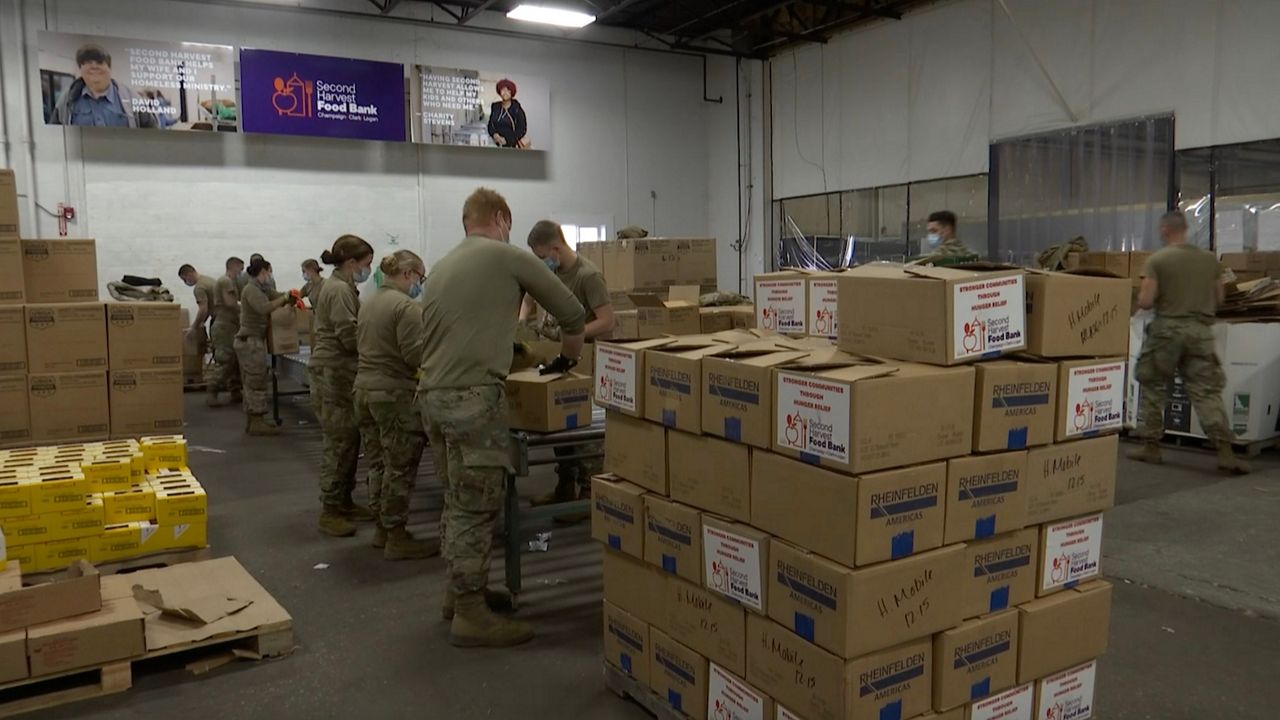 SPRINGFIELD, Ohio — At Springfield's Second Harvest Food Bank, the two dozen guardsmen and women have become the picture of efficiency.

Since late March, the team has packed and distributed more than 6 million pounds of food for families throughout Clark, Logan and Champaign counties.

Most mornings you can find a team of guardsmembers forming an assembly line to pack hundreds of boxes of food.

Spec. Keenan Kinnell has been at the food bank since nearly the beginning of their nearly year-long mission.

"I've been here since April," Kinnell said. “I actually joined (the guard four years ago) because of things like this. I actually wanted to help my community. I also wanted to serve and be a part of something other than myself.”

Over the past several months, he said he's done just about every job at the food bank, from packing food, to delivering it and even assisting with administrative work.

Second Harvest is one of the 14 food banks across Ohio that's relied on the National Guard to keep up with the unprecedented demand from food insecure families.

On top of the increasing need, Second Harvest Assistant Director Nicholas Hubbard said the pandemic lead to another issue, a drop-off in volunteers.

For months, he said Second Harvest could not let any volunteers come in at all.

“Late summer, we started to notice that things were letting up a little bit and so we did open our volunteer program back up," he said. "As a result of that about 30 days later, we had to shut it down again.”

Meanwhile, the guard mission was set to expire on Dec. 17.

Hubbard said the food bank had to plan for the National Guard's departure in the middle of the busiest time of the year. However, they breathed a sigh of relief when the president granted federal funding to extend the mission for three more months.

"Holidays are a time of great need," he said. "We’re serving a lot of families in November and December for the holidays and for Christmas."

By the time the mission ends, it will be nearly a year since the initial deployment, well-surpassing the longest and largest domestic deployment the National Guard has seen in Ohio history.

Hubbard said that will ensure Second Harvest and food banks across Ohio will make it through the holiday season and through most of March.

By then he's hoping cases and hospitalizations will go down and vaccine distribution will be well-underway.

Until then, Keenan said he expects to stay at Second Harvest, where he can see first hand the impact the National Guard is having on families across the state.

“Being able to meet different people and see a bunch of different things that I normally wouldn’t be able to see as a civilian,” he said.

Along with the food bank mission, hundreds of citizen soldiers with the Army and Air National Guard are also deployed to help with COVID testing, nursing home staffing and now repacking and sorting vaccines coming into the Department of Health.