In Franklin County, Biden Demonstrations and a $5 Trump T-Shirt Sale

At noon, Republicans for Donald Trump gathered for a prayer at the Statehouse, later met by a larger group of cheering, honking Democrats.

In the suburbs, a “Trump Store” was holding a $5 blow out t-shirt sale.

Trump outperformed Biden in Ohio by an eight-point margin, after polls projected a dead heat.

Conservatives continue to dominate the political landscape in Ohio, with the GOP holding all 12 of its incumbent House seats. As for the state legislature, Republicans built on their supermajorities in the Ohio House, netting three seats, and in the Ohio Senate, where they will have flipped two seats if a challenger’s 12-vote lead holds up.

A blue wave could have flipped the Supreme Court blue. Republicans held onto their majority there, too.

But downtown in Columbus Saturday afternoon, everyone seemed more focused on the presidential results.

Columbus residents for Biden said they were excited for the next four years, demonstrating downtown to show their excitement, trying to spread a message of positivity and “peace.”

Cousins Elijah Mills, 12, and Bradley Binion, 11, were just having a boring day walking around downtown when they stumbled upon the demonstration. So they stopped to watch it all unfold.

They said they preferred the Biden-Harris ticket for their positions on racial issues, but feared the election results would mean more virtual school. Getting back in the classroom was at top of mind for the boys.

Binion said both candidates were flawed, and had a hard time supporting Biden, citing the President-elect’s record on welfare and food stamps, which he said was too moderate.

He was worried the driving demonstrators were going to break their horns from all the honking. 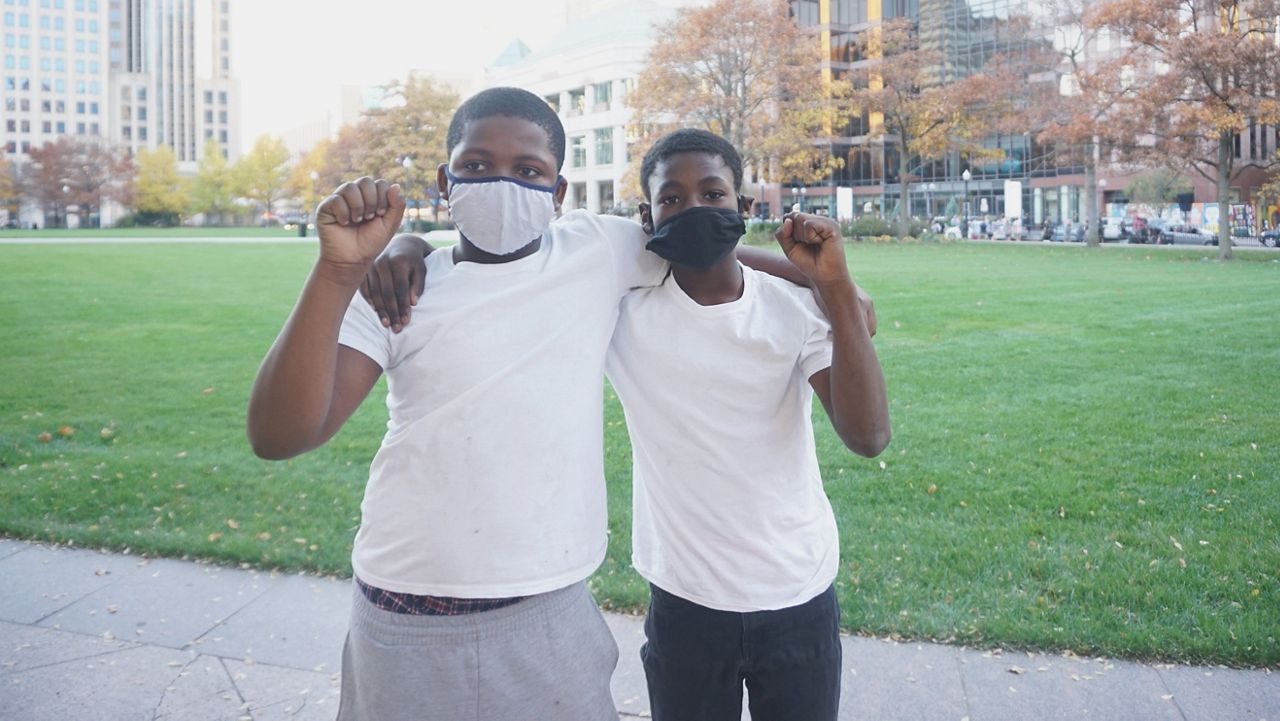 “See, they’re wasting their gas and their horns. Watch, when they get home, they’re going to be like ‘My horn doesn’t work!’” he said.

Mills said his message was Black Lives Matter, stay safe, and “stop busting out all the windows because this is our community.”

In Grove City Sunday morning, next to a helium balloon advertisement floating in the wind for the local “Trump shop,” makeshift signs advertised a $5 sale for Trump 2020 T-shirts and flags.

Columbus resident Cristal Allen, co-owner of a chain of these Trump stores with 56 locations, said the sale has been “very controversial.” As the president contests the election results on Twitter and in the courts, the sale is an indication in this conservative enclave outside of Columbus that even ardent backers of the president realize his time in office is coming to an end.

“I’m definitely a Trump fan, but I’m more of an America fan. So I hope that whoever represents our country does it in the best of intentions to help American grow and progress from whoever's in charge,” Allen said.

On Thursday, a half dozen protesters gathered outside the store, which has been open for two months.

She said business has been phenomenal, $15,000 per week at this store, until it slowed down this week. They went from driving around the country to Trump rallies selling T-shirts out of a truck, and turned it into storefront business that’s made her son a millionaire, she said.

Allen expects Ohioans will accept the results of the election, but it could take a bit of time for it to sink in.

As for the store, the lease lasts for another month, and Allen will keep selling discounted shirts.

“We're going to  make sure we stay open so that all of Biden’s voters’ friends can buy them their Christmas presents,” she said.