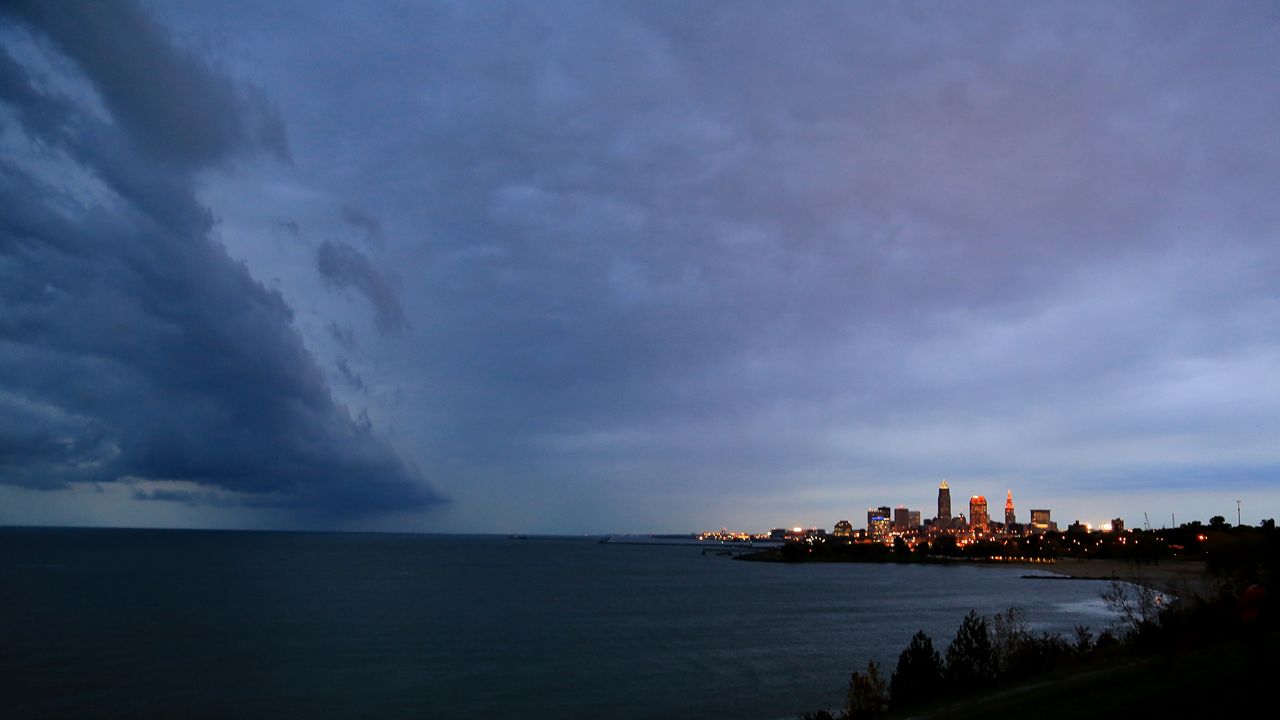 Cleveland No. 1 with Highest Poverty Rate Among Larger U.S. Cities

CLEVELAND — Poverty affects millions of people across the country. Data released by the U.S. Census Bureau shows poverty is high in Ohio, listing Cleveland as the poorest big city in the country with Cincinnati not far behind.

Ayesha Williams is all too familiar with poverty.

"I don't think I was given like a fair chance to do the best that I can do, you know. My environment wasn't ... stable. It wasn't constructed enough so I want to give girls like a chance to get that fresh start," said Williams.

At just 15 years old, Williams gave birth to her first child. And just over a year ago at age 23, Williams was pregnant with twins. She was also homeless.

"It was really terrible. It was really hard because, like, I knew they were coming so I had to get like get my stuff together," said Williams.

But she didn't give up.

"I signed up for ... University Hospitals for their program for the PCNA (Patient Care Nursing Assistant) and I guess they were connected and I couldn't do (it) because I was pregnant with the twins so they put me into towards employment, like their full program so that I could have employment."

Williams is just one of thousands in Ohio who live in poverty, but she has been able to turn her story around. She worked with a nonprofit called Towards Employment who helped her get back on her feet. The nonprofit helps people find jobs especially those who have obstacles such as the need for childcare or transportation.

"We work with individuals who might have some sort of barrier to employment. They might be a young adult and don't have a plan for what they want to do going forward. They could be someone who's coming out of the criminal justice system and is looking for a second chance. And they might be someone whose been impacted by covid and is looking to make their career transition," said Bishara Addison, a senior manager at Towards Employment.

Emily Campbell is the associate director at the Center for Community Solutions, a nonpartisan policy research organization in Cleveland.

"When we look at the data, we don't see that it's necessarily people's fault that they end up in poverty. You know, almost 100,000 people in Ohio worked full time for the full year last year and still and still lived in poverty. So it's not about not being willing to work or wanting to sit at home. For thousands of Ohioans they are trying, they are working, and working hard but still just not earning enough to be above the poverty threshold."

She explains that studies show if you are born into poverty and grow up in poverty you are likely to stay in poverty. She also said people in Ohio simply aren't making enough money to get by. Williams agreed.

"It's just generation after generation seeing the same thing. I mean what do you expect for them to change? I mean if they keep seeing, everyday they're not really exposed to the stuff that they need to see and cope with things that they're supposed to do better," said Williams.

The Center for Community Solutions compiled a list of the top 10 poorest cities. The list is based off census data from 2019. Campbell said household income is the determining factor of where cities end up on the list. It shows Cleveland as the poorest big city in America with a poverty rate of 30.8 percent. 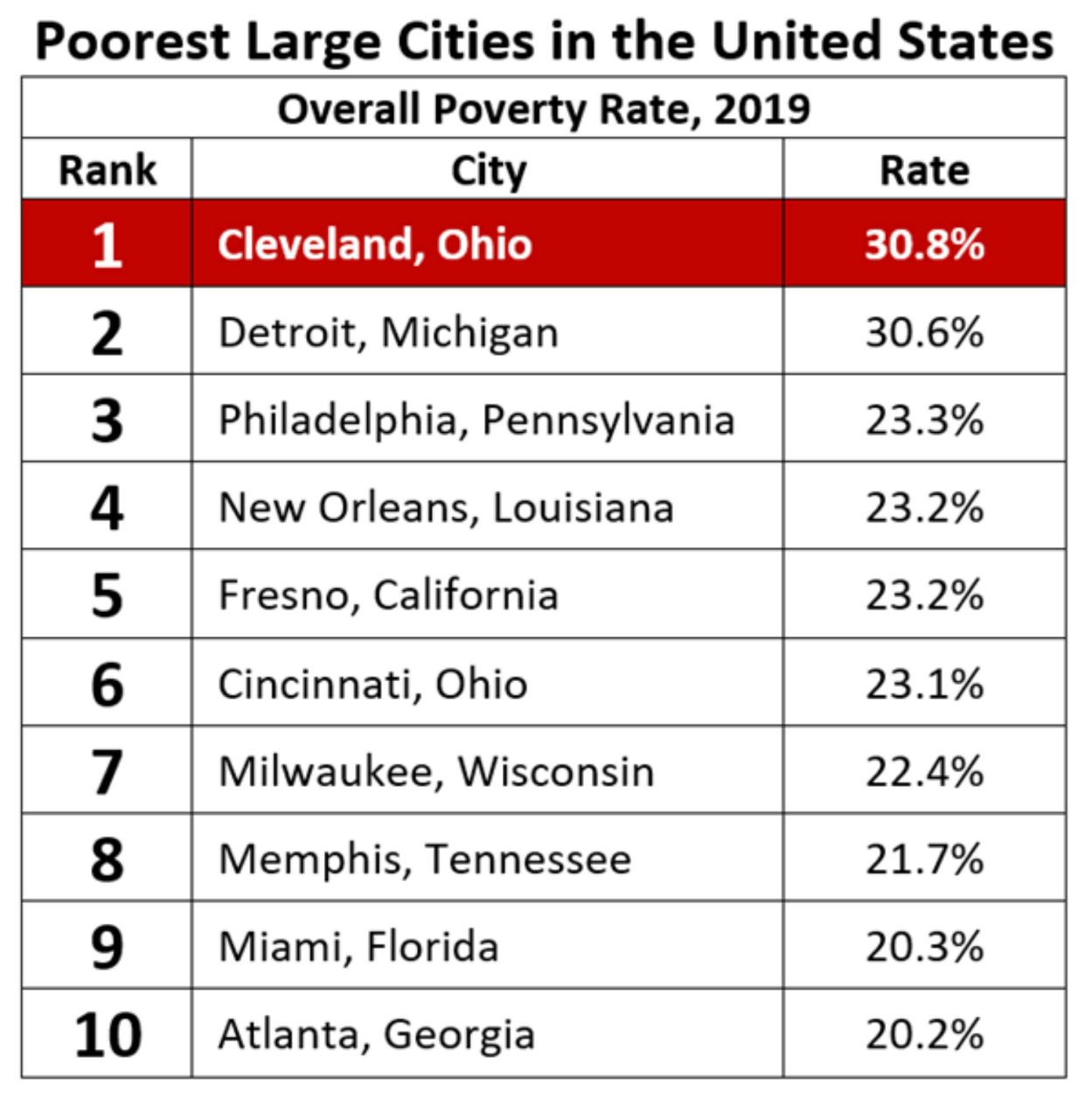 Courtesy of the U.S. Census Bureau.

Big cities are defined as cities with a population with more than 300,000. Cincinnati is number six on the list with a poverty rate of 23.1 percent. Ohio is the only state to have two large cities on the list.

But it's not just large cities facing high poverty rates. Other small and mid-size cities in Ohio such as Athens, Cleveland's east side and Youngstown are also dealing with high poverty. Campbell said people can't always control ending up in poverty.

"The fastest way to get off of the bottom of these lists is to help people earn more. Now whether that comes through policy changes like the minimum wage or through changes in employment helping people get and keep a better job and additional training, really just getting more money into the hands of families," said Campbell.

As for Williams, she feels things are turning our around for her since receiving help from Towards Employment. She is in school, she's working, she's engaged, and looking forward to buying a house.