At a Columbus School, Hundreds Never Logged On in the Spring — Can Schools Get Students Online This Fall?

COLUMBUS, Ohio — At a high school on the west side of Columbus, the principal says her team has gotten pretty good at “stalking” to track down chronically absent students—an important tool when 200 to 250 of the school’s 1,000 students were not logging on for e-learning in the spring.

Using a variety of strategies—calling home, talking to friends, perusing social media, and knocking on doors of homes—Briggs High School was able to make contact with about 60 percent of those students. The other 40 percent were totally unreachable.

But even after the school made contact, about 80 percent of the students who were reached continued to remain completely offline throughout the spring quarter.

The poor participation rates in the spring were seen at many Columbus City Schools. According to a district spokesperson, about 78 percent of students were logging on to the district’s e-learning platform.

When Columbus City Schools resumes with online learning in the fall, school officials hope to see better participation numbers after expanding students’ access to technology with 19,000 Chromebooks and 1,000 hot spots distributed in June and another 20,000 Chromebooks on the way.

In the spring, students were scrambling to find a spot to access the internet if they lacked Wi-fi at home, and some were sharing laptops.

But for many students, technology was not the only reason for their lack of participation.

Challenges were particularly common among students whose parents lost their jobs due to COVID-19 or whose parents were essential workers, unable to supervise their kids during the hours they would have otherwise been at school and unable to find or afford child care. Younger students require more adult support to regularly log on for e-learning. Older students may not have been logging on because they were preoccupied with childcare responsibilities looking after their younger siblings.

Some students have a hard time getting engaged by the content of online learning even if they have the technology, said Harold Bates, matriculation specialist at Briggs.

“I think our kids have a tendency to become bored with some things that teachers put online,” he said. “It just doesn't captivate their attention.”

Domenic Farley, a class of 2020 Briggs graduate, said he thought about skipping e-learning in the spring. School had always come easy for him, but he found the switch online in March very difficult.

“Getting teacher help was harder. Because it's online, you don't get to see them every day,” he said. “The teacher can usually remind you when due dates are and when you need to do your work. And they can help you with a problem that you have. Without seeing the teacher, it's kind of hard because you can't really ask for help unless you email them.” 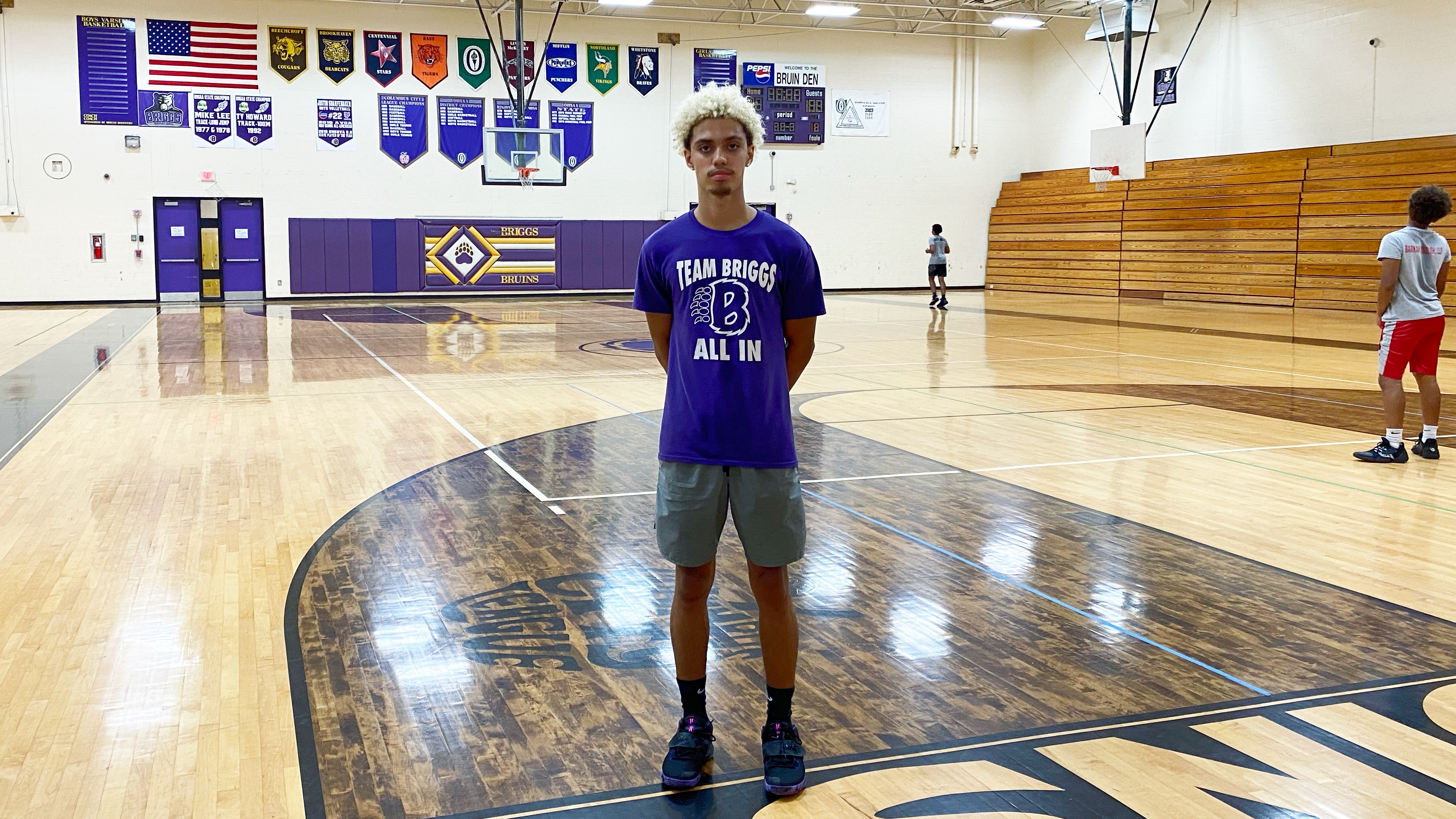 He suspects many of his classmates did not participate because they already had the requirements to graduate and online learning was just too frustrating, while others had to take care of their siblings or had bad internet, he said. Ultimately, he was motivated to keep working to maintain a GPA to play college basketball.

Graduation rates at Briggs were normal, Milligan said. Those who were on track to graduate did so, however many students did not complete the requirements to advance to the next grade level due to their lack of participation in e-learning.

Tony Rice, a coach at Briggs, said some of his players needed motivation to participate in virtual learning, and he tried to push them as best he could, as well as checking in on more immediate needs like whether they had access to food.

“I believe the inner city kids are about to face a real strong problem. You need on-hand motivation. You need a teacher there—someone there to pull you along. I know I needed it when I was in school,” he said.

For students who do not log on in the fall, schools are obligated to pursue all possible interventions to divert those students out of truant behavior.

In previous years, Truancy Intervention and Prevention Program (TIPP) officers of the Franklin County Juvenile Court, whose salaries were partially shared by school systems, were responsible for identifying truant behavior. Their goal was to get students back on track before those cases reached the juvenile justice system. As a last result, they could file truancy cases.

But according to Lead Juvenile Judge Elizabeth Gill, “a couple of school systems including Columbus unfortunately have decided that they do not want to continue that arrangement for the upcoming year.”

She said the schools did not envision how the program could work virtually, even though the court was eaged to get creative, she said. The financial burden of COVID-19 on schools may also have been a factor, she said.

“I think it's very, very unfortunate,” she said. “Our data pre-COVID shows that those programs are really very successful and have a very high rate of helping children and their families get over the issues that are causing truancy.”

In the fall, schools will be responsible for filing truancy cases directly with the court after they have exhausted strategies to get students back on track. Their responsibilities and the court's responsibilities for intervention to divert cases away from the juvenile courts are part of House Bill 410, a December 2016 law that outlined a "preventive approach" to truancy.

Milligan and Columbus City Schools spokesperson Jacqueline Bryant said now is not the time to be heavy handed with truancy enforcement. Bryant said Briggs will not send officers to students’ homes unless there is a safety concern, in which case they will have a police officer conduct a health and wellness visit.

If a student continues to meet the criteria for truancy, an attendance team will monitor the case and if improvement is not made they will ultimately file a truancy case, Bryant said.

With the TIPP officers gone, the court has expanded its technology to monitor more information regarding which youth are demonstrating truant behavior, Gill said.

When a truancy case is filed, the court conducts its own intervention through the Youth Education and Intervention Services Department to identify barriers and pursue all possible interventions to get students reengaged with school, Gill said. Cases are dismissed if the truant behavior ceases.

“Our philosophy is that most youth are truant because of systematic and societal issues,” she said.

With all of the various challenges families are facing due to COVID-19, Gill said the court has greater intervention responsibilities and may need to work harder than before to try to connect families with support systems that might remedy truant behavior, diverting cases from the juvenile justice system.

Milligan said Briggs has a spreadsheet to keep track of students who are not logging on. She said they pursue every pathway to finding their out-of-contact students.

“We find our kids,” she said. “We get on facebook, we talk to their friends, we talk to community members that engage with them. We will search high and low for a student and typically we’re pretty successful finding them.”

In cases where students cannot be found, Gill said schools are to file truancy cases with the court.

“But see, there's a problem with that,” she said. “Once they file that, they have to get service of that complaint on that youth.”

If the student is unreachable, serving that student is usually very difficult. The court assists as much as possible, Gill said, but they generally only have as much information as the school does.

In some of these cases, students may have suddenly moved to a different state or even a different country, which was likely a factor in the spring, with some families relocating due to COVID-19 or students moving in with different family members at different addresses.

There are “logistics nightmares” when a family suddenly relocates and the school does not receive that information, or when utilities get cut off, families are evicted, or a parent loses a job, and the school has no way to know, said Regina Fuentes, an Eastmoor Academy High School teacher and spokesperson for the Columbus Education Association.

At her school, some of her colleagues only had 40 or 50 percent participation in the spring. She was fortunately able to keep her classes at 80 or 90 percent participation through constant communication, she said. It helped that they were already using Google Classroom before the pandemic and that she had a list of contact information for every student.

The pandemic has changed everything for teachers in low-income schools, and teachers have had to take on extra responsibilities to try to keep their students participating, she said.

“Teachers cannot do 20 jobs—we can't be students’ social workers, their babysitters, their everything,” she said.

What the fall will entail in terms of participation remains to be seen. Columbus City Schools has pushed back the start of the school year to allow time for additional professional development, which will include training on best practices to engage students, Bryant said.

Gill said it is hard to predict how much truancy court activity the juvenile division will see.

“We as a society are going to have a significant problem with students following through with the requirement to participate in school virtually," she said. "Whether or not that shows through on the court side with filings is still an open question—how much are the schools going to enforce it?”