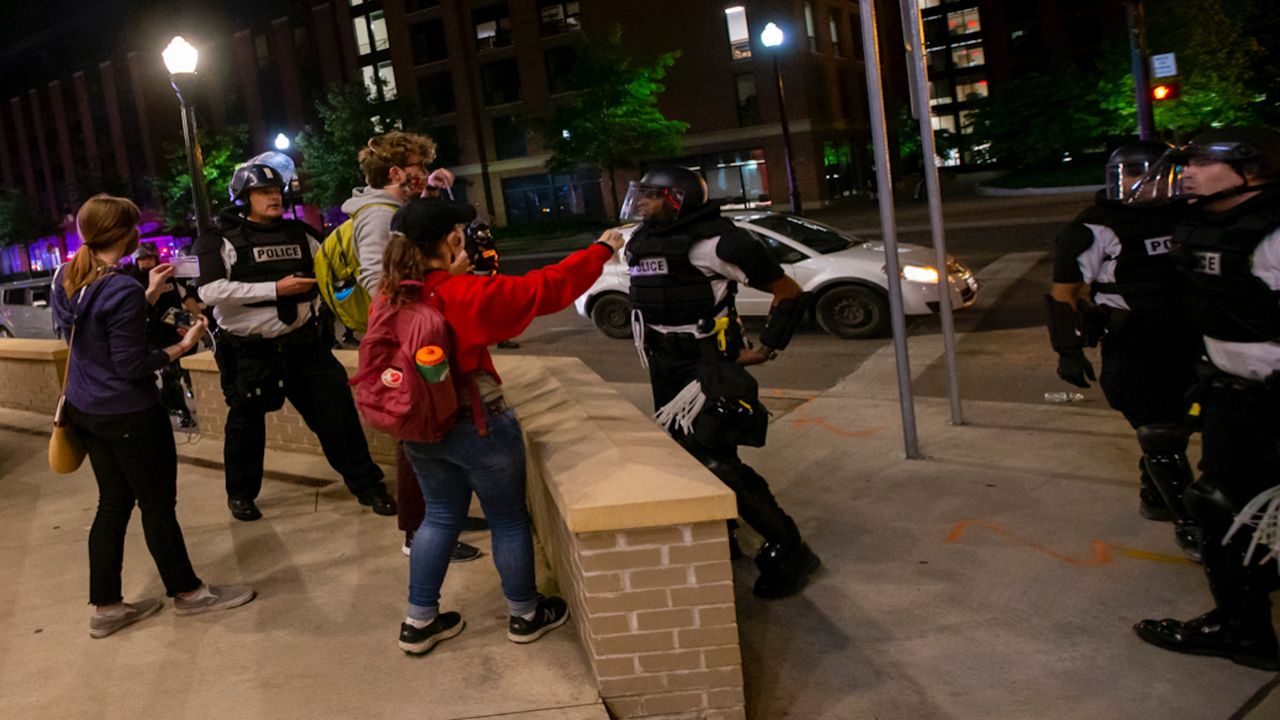 Media Met With Force From Police While Covering Protests

COLUMBUS, Ohio — As protests against police brutality and for social justice continue across the country, some journalists covering the events are being met with force.


Reporters from the Lantern — Ohio State’s student-run media organization — were covering a peaceful protest at the corner of Lane and High Street in Columbus.

But when the citywide curfew of 10 p.m. struck they were met with resistance from Columbus police, who told them to leave the area.

“We’re news media. Media are exempt from curfew,” the students pleaded in the video posted to Twitter.

Our reporters were sprayed by police after identifying themselves as "news media" repeatedly. News media are exempt from the curfew. #columbusprotest pic.twitter.com/GOzptPjZD9

Despite the student journalists identifying themselves as members of the press and explaining they were allowed to be out past the citywide curfew, Columbus Police pepper-sprayed the three journalists.

The Lantern’s Assistant Campus Editor Max Garrison was one of those students.

“They sprayed at nearly point-blank range,” Garrison said. “I was holding up my phone trying to film and my press pass in the other hand and officers sprayed and it ricocheted all the way up my forearm and into our campus editor’s eyes.”

OSU Journalism Professor Nicole Kraft said she was shocked to see what happened to the students.

“They were very clear about who they were and what they were doing,” Kraft said. “They were very professional in terms of their actions. And that professionalism was met with a force that was in no way needed. It was no way appropriate and quite frankly, it was intolerable.”

Columbus Police have not issued a public apology to the students, but Chief of Police Thomas Quinlan answered questions during a press conference on Tuesday.

“I sent the incident to internal affairs to have it investigated so we can find out what the facts are because again, if that occurred, then we need to fix it,” Quinlan said.

Another instance of police using force against the media happened Monday in Cincinnati. A reporter for the Cincinnati Enquirer was detained by numerous officers despite identifying himself as a member of the media.

The moment was captured by Nick Swartsell and posted to Twitter almost immediately.

Police grabbing media. I was grabbed by my bandana from behind and pulled into a group of officers as they approached me. An enquirer reporter just hauled off. pic.twitter.com/cNreMVFgyH

But he was later released and Cincinnati Police issued a public apology via Twitter.

Several arrests in the area earlier at McMicken & Stonewall. An @Enquirer reporter was temporarily detained & @WCPO reporter moved from the immediate area as officers were attempting to clear the street while having rocks thrown at them. We apologize for any inconvenience.

However, these instances continue to pop up across the country.

This video from KTUL in Tulsa, Oklahoma shows a reporting team being shot by police with pepper balls during a live shot. (Warning: Language)

While on the front lines yesterday in Tulsa, My reporter and I were both shot with pepper balls as the protest turned violent.
Intense moment, but we are both fine. pic.twitter.com/q4D9oQ22hV

So why is this happening? Kraft offers her opinion.

“It’s been open season on the media for quite some time,” Kraft said. "Really, if you think about it for the last four years there have been mentions of the media being the enemy of the people. I think that rhetoric has gained a foothold that is not only dangerous for the media but it’s dangerous for democracy.”

She said there is no greater instance of government trying to limit the power the media possess to uncover the truth.

“The line is that democracy dies in darkness,” she said. “If we prevent the media from doing the job that it was intended to do from the founding of this country and the establishment of the first amendment, then I shudder to think where we are going to be.

Cincinnati Police Spokesperson Lt. Steve Saunders said they have no intention of limiting the powers of the media and appreciate the connection between the police and media to share information to the general public.

He stressed that protests can become volatile situations and to ensure safety, media should operate under these guidelines:

"First, clearly display you are a member of the press and wear a reflective vest. Second, keep your distance — do not get as close as possible to the action and absolutely do not engage police during crowd control tactics. And use the power of technology, to shoot footage from a distance via zoom on lenses."

He stressed these points and more to Cincinnati-area TV news directors and newspaper editors on a conference call Tuesday. He looks forward to police and media maintaining a positive working relationship moving forward.

And as for the conflict between police and student journalists in Columbus, Garrison hopes to be able to do his job without being purposefully injured.

“I think the main thing we’re hoping is that moving forward press will be treated as press rather than as an extension of the protests and we hope there will be an investigation into people responsible for the incidents and will be held accountable,” Garrison said.