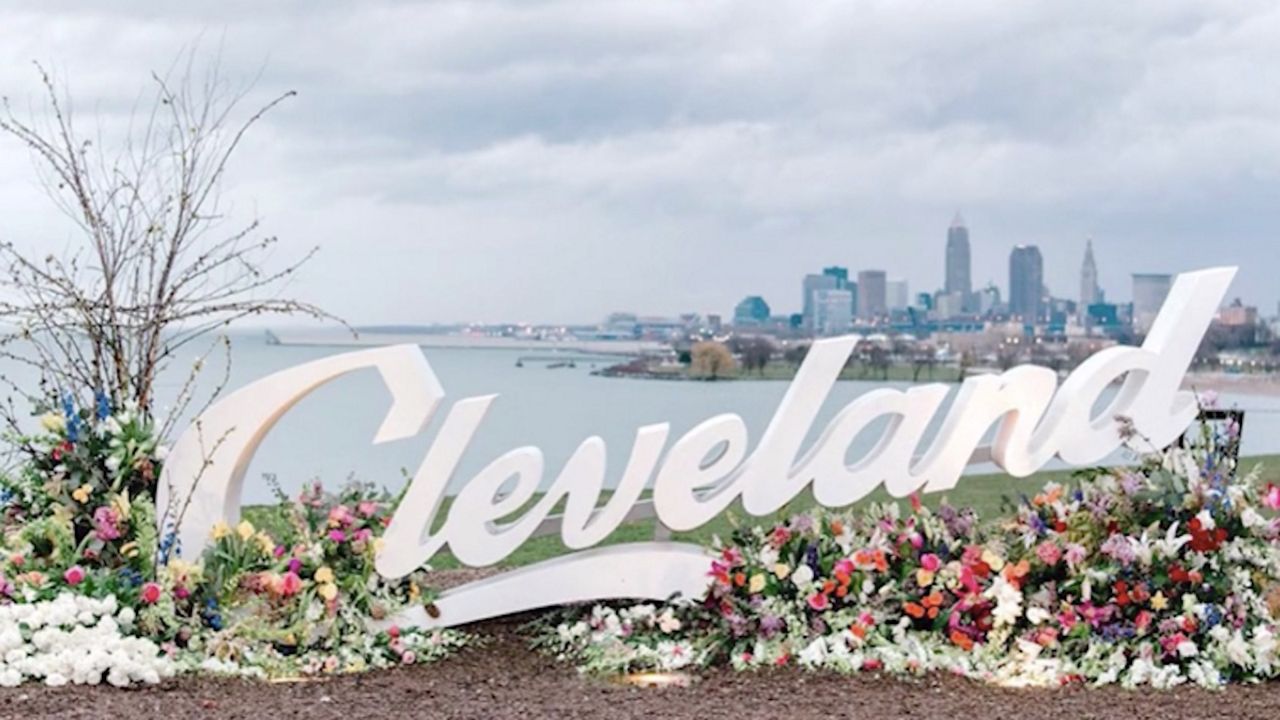 CLEVELAND, Ohio — A few weeks ago, Cleveland-based florist Andrew Paulson was gearing up for his busiest season. Weddings, showers, and celebrations of all kinds were on his calendar — and then COVID-19 hit.

“Just like that I feel like it hit, and was like wow, this hit home and consistently every other day or every day for the past two weeks, I’ve been getting cancellations, postponing, you know, having to regroup and reorganize with other vendors,” said Paulson, of Andrew Thomas Design.

Paulson says he had 40 buckets of flowers that would no longer be used to line alters or decorate event spaces. His vision for how they would be used had to change.

“When I went out to the studio and I would open up the door and see all those flowers. One night I don’t know what struck me, but I got the idea and grabbed a spool of wire and grabbed bunches and bunches and just kept making this garland and setting tables up until the buckets were done. I was like, i’m going to go to the Cleveland sign and I just threw it on the Cleveland sign. Luckily, one of my friends from Cleveland met me there, this was the first one in Tremont, and helped me adhere it,” he said.

The six” Cleveland script” signs attract visitors all year round, and Paulson’s floral installation is a pleasant surprise for many people looking for something pretty and positive during this pandemic.

“It reminded me how simple the beauty of flowers is for everyone and how much happiness it brings people. Seeing cars go by at midnight smiling and beeping and seeing pictures the next morning of people being like, wow, I saw this on my way to work, what a source of joy or what an inspiration, thank you to whoever did this — and it escalated from there. That's when I decided we could make this into a thing. So, I reached out to Debbie and Kristin for their help,” Paulson said.

Paulson collaborated with Debbie Mazurowski of Mayesh Wholesale Florist Cleveland and Kristin Leanne Photography for his next installation, on a different Cleveland sign. Mazurowski says she too needed something to do with her flowers after more than 50 of her events were cancelled due to COVID-19 restrictions.

“I was looking at the cooler with all the flowers in it and you know, I thought, let's just give away instead of throwing them in the dumpster. That would have broke my heart to throw them all away. We actually had bouquets that were supposed to go out that we couldn't, we no longer got an order for, so I said, hey, how about if we do like only bouquets and kinda like put a little tag on and then put it out by the install,” Mazurowski said.

Paulson says photos of the installation that Kristin Vegera, of Kristen Leanne Photography, took have been shared on social media over 30,000 times.

“I knew what I was doing was to capture something for Andrew and for everyone and just share it for people who wouldn't be able to go out,” Vegera said.

Vegera says capturing and sharing the beauty of Paulson's designs helps her cope with all the uncertainty brought on by COVID-19 .

“Personally, I’ve had just a lot of postponements, but then people are still worried about like, will summer be okay? And then in the fall, like, is there going to be like a second wave? are smalll weddings okay?, should we move to 2021?, Vegera said.

Paulson says giving flowers to Cleveland allows him to continue spreading beauty when his community needs it most.

“It gives me a sense of purpose, gave me something to do. I don't care if I was making money or not. We’re all working together, I think reminding each other that we still have a purpose even though jobs are cancelling, and then we have that ability to just make things happen and make it work and provide a little bit of hope,” said Paulson.