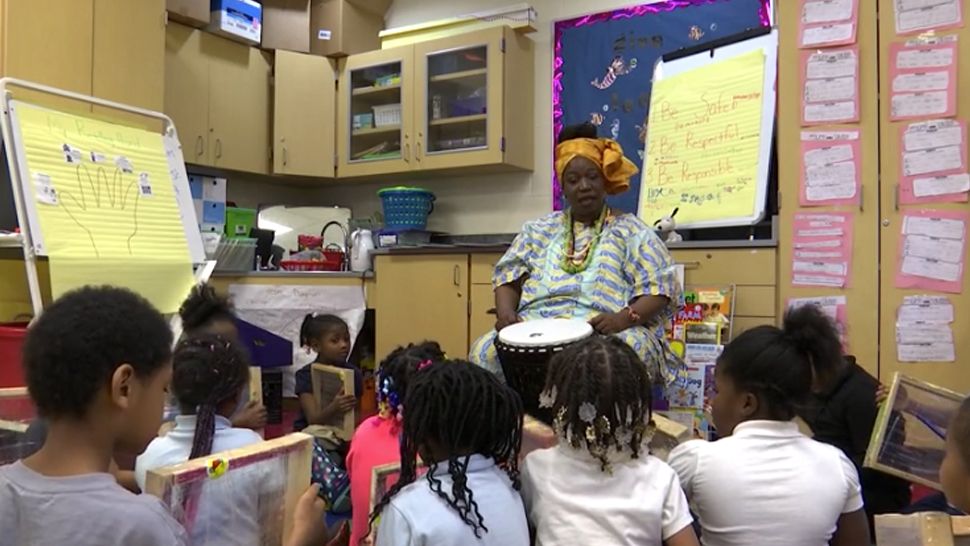 CLEVELAND, Ohio — Yvetta Ealy has drummed in various places throughout the world. But her favorite place to share her gift is inside of Cleveland Metro School District classrooms.

“When you bring in the drum, which is the first instrument which is the voice of our ancestors, when you bring that in and have the kids more familiar with a drum and who they are and being comfortable with being this color,” said Ealy.

Ealy is a visiting artist with the SAFE Project. SAFE —standing for “Students Are Free to Express.”

MetroHealth Director of Community and Behavioral Health Dr. Lisa Ramirez says the project’s goal is to normalize and validate kids’ anxieties and provide a supportive, healthy and fun outlet.

“It's not a psychologist walking into the room and saying this is how you cope, it's hey, let's write a slam poem all together as a class and think about the things that stress us out,” said Ramirez.

Ramirez says as if being a student isn’t enough, some Cleveland youth deal with trauma, toxic stress, poverty and other adversities outside of the classroom.

“The Centers for Disease Control, every two years they do a youth risk behavior survey in high school students, and in 2015, Cleveland came out as the number one highest rate of high school students who were stating that they had sadness and hopelessness and also suicidal gestures or suicidal attempts,” said Ramirez.

The SAFE Project was launched in 2017 in John Adams and Lincoln West High Schools, and most recently expanded to start programs in Pre-K, kindergarten and first grade at Harvey Rice Elementary School.

Taylor Moore is a first grade teacher at Harvey Rice and says the project is having a major impact on her students.

And she says the various SAFE programs are teaching her new things.

“They painted Picasso pictures. They drum in all different types of beats. They did a performance and learn lines. So, they're showing me how much more capable my students are as well,” said Moore.

Ealy says embracing, encouraging, and supporting the district’s youngest students with the arts can help change and save lives.