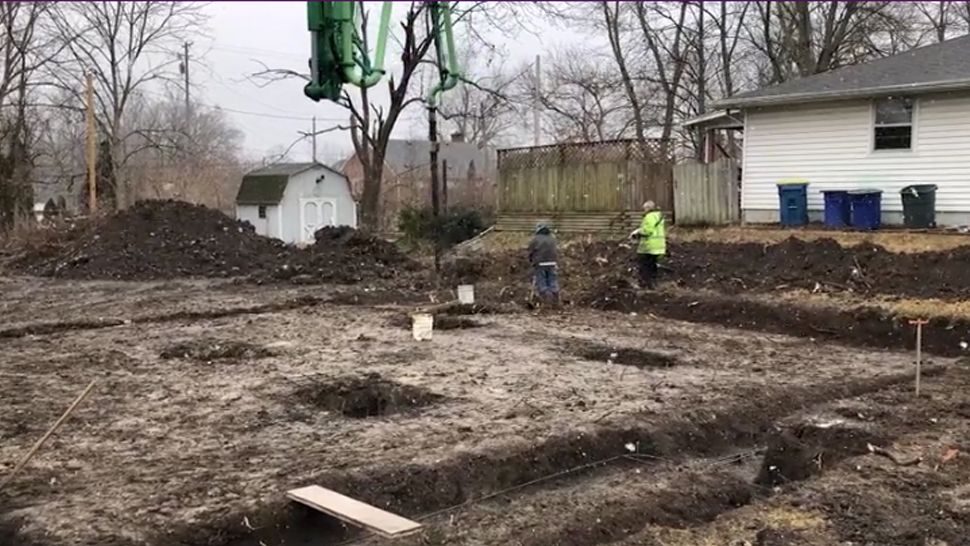 “I can picture my house there already,” Thomas said.

And as the foundation is being laid, it makes her think of the journey she’s been on to get to this point.

She’s spent an estimated 300 hours volunteering at the Habitat for Humanity Re-Store, while helping to build two homes for other families in need. But this past year, when the tornadoes hit Dayton, it flipped her life upside down.

“One building, the whole top of the building was gone,” she said. “And mine, my roof was off. So, I’m like, oh gosh, my kids was here.”

Thomas’ two sons, Mark and Maurion, were inside their apartment at Stillwater Park Apartments.

Thomas was at work at Miami Valley North, when the tornadoes hit. She says she was terrified to know they were home alone during the storm.

“I was panicked, I was nervous, I was crying,” she said. “And it was just a sad moment. It’s still sad — I feel like I wanna cry right now — but I’m gonna hold it. Because my kids are my life.”

Thankfully her sons weren’t hurt in the storm. But after it was over, Thomas and her boys had to live in a condensed two-bedroom apartment while the roof over her sons’ room was repaired.

She says living with two growing boys in a small two-bedroom apartment has been a challenge. But she’s never lost hope that her Habitat House was coming.

Through contributions from several organizations, including the Dayton Fraternal Order Of Police, Monica will now have her house.

Norm Miozzi, executive director for Habitat for Humanity of Greater Dayton, said they couldn’t be happier to build the house for Thomas and her sons.

“It shows you the community believes in the same premise, that home ownership changes lives,” Miozzi said.

As the project rolls along, Thomas says she can’t wait for it to be complete.

“I already know what it’s gonna look like, and everything,” Thomas said.

She’s hopeful to move in this summer, in time for her birthday, and her kids can’t wait because they’re ready to have their own rooms.

“I think it’s just gonna be a loud house, to be honest,” said Thomas. “For the first year or two. Because they try to not be so loud in the apartment because I’m always like, ‘Be quiet, we have neighbors!’”

But soon they’ll be able to be as loud as they want in their new home.