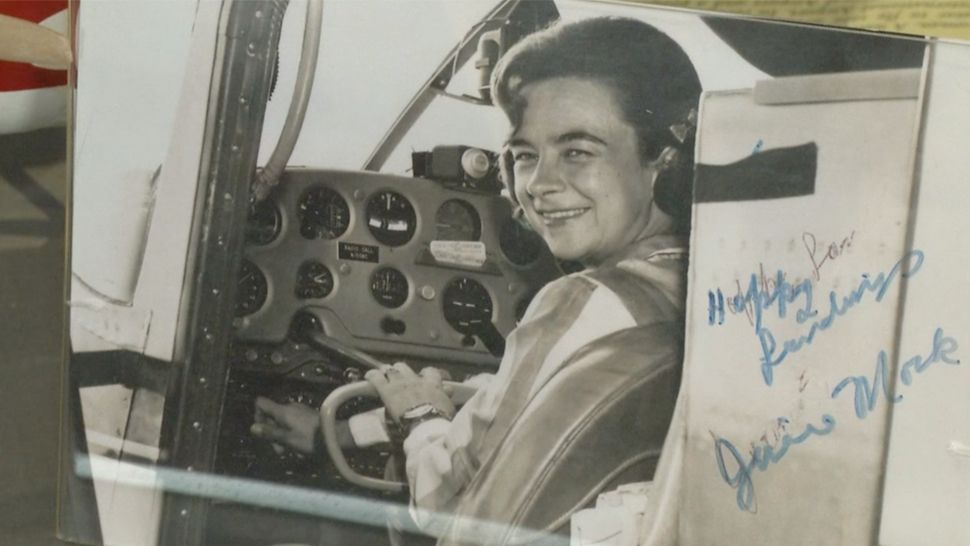 The Legacy of Flight Pioneer and Newark Native Jerrie Mock

“My teacher was trying to tell us that Amelia Earhart was the first woman to fly around the world, and I was like, no that's not right, and they're like, no you're just making that up. And I was like alright, I'll prove it, and I brought Grandma in for show and tell,” said Pike.

Pike continues to fight for respect for her grandmother, who was nicknamed “The Flying Housewife” by the press, much to her dismay.

She attended Ohio State for aeronautical engineering, but gave up that dream as a teenager to marry her husband Russell Mock.

The couple had three kids, and eventually in her thirties, she would get her pilot’s license.

Jerrie's younger sister Susan remembers it all quite well.

“Just as she felt she was supposed to do something special, we knew it. She wasn't going to take any chances, she was going to do it by the book,” said Newark native Susan Reid.

And after visiting 20 nations in 29 days and traveling some 23,000 miles, Jerrie Mock landed in Columbus on April 17, 1964, 27 years after Earhart's unsuccessful trip across the globe.

But the trip wasn't without some dramatic moments, later chronicled in her book.

“She landed at the wrong airport. It was a secret military base and she was greeted with three truckloads of soldiers careening her out of nowhere with their guns, telling her, you're not in Cairo. They just said, when it's dark, you may leave,” said Reid.

Mock then made national headlines, and a short time later she was awarded the FAA's gold medal award by President Lyndon B Johnson.

Mock even appeared on the game show “To Tell the Truth.”

But Mock shied away from the limelight, and never endured the lasting fame she deserved.

By 1969 her flying career was over, and a year later she wrote “Three Eight Charlie,” chronicling her solo trip across the world, on the Spirit of Columbus single engine Cessna 180.

Mock was always willing to share her story with aviation enthusiasts and has inspired countless female pilots for generations.

“Even though Grandma isn't well known, she is with female pilots at least, because, the first woman to fly around the world. And just a lot of people have said if she hadn't done what she did, I don't think I would be who I am today,” said Pike.

And five years after her passing, both Pike and Reid are doing their parts, whether it’s fundraising, speaking publicly about Mock’s legacy, or writing articles dedicated to the memory of their beloved hero of aviation history.

“People need to know about her, and they don't all come to The Works and see the statue and the airplane. And they don't all realize when they're at the airport that this was a girl that was from Newark, Ohio, who's born and raised here, small stature, but strong,” said Reid.

And as for the future, Pike is developing and starring in a one-woman musical about the life of her grandmother next year and hopes to debut it in Newark.

“I'm a singer, so it's also going to be a musical. Grandma loved, loved opera and I was classically trained for a while, and so this will be just a really wonderful experience, gift from me to her even though she is passed, to give her the voice she always wanted,” said Pike.

Gone, but her accomplishments and legacy live on, not only in central Ohio, but across the globe.