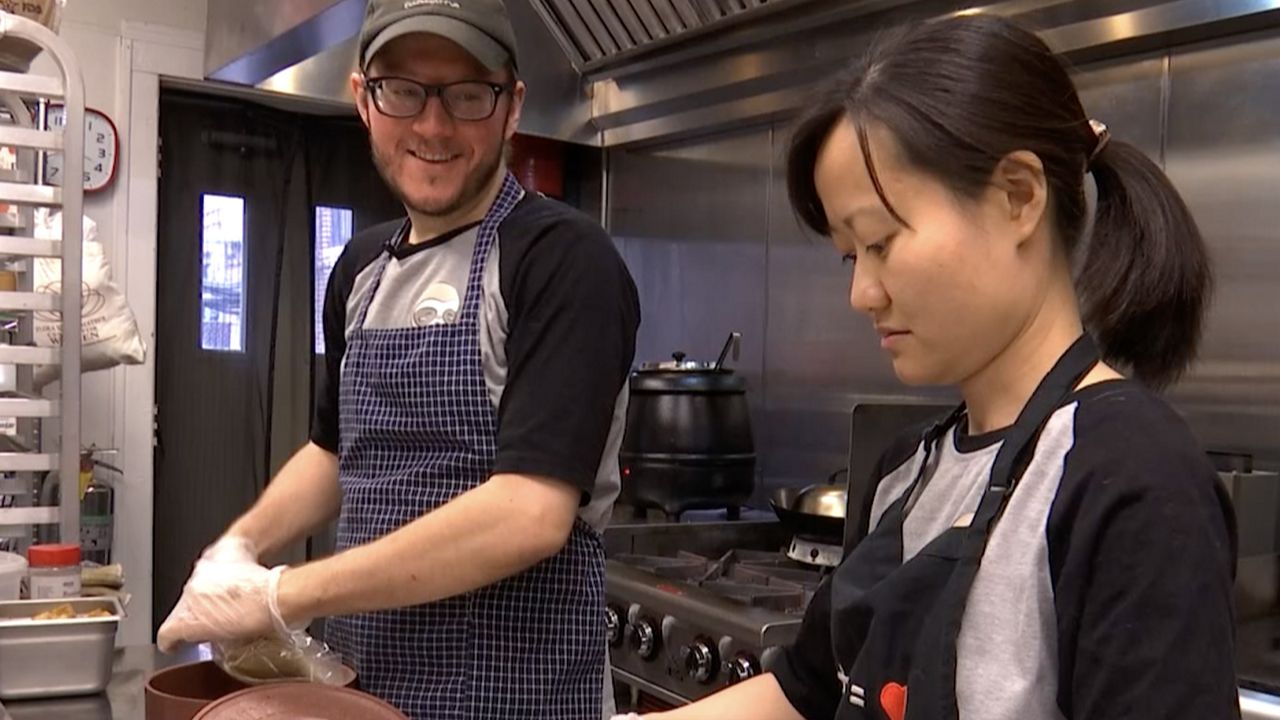 CLEVELAND, Ohio– Frances Chang and Joshua Sias have been cooking for Clevelanders for six years- by hosting pop-up restaurant experiences around the city. But it was just this year when they opened Foodhisattva, an Asian-Vegan Fusion restaurant, which serves dishes that spotlights Owner Frances Chang Taiwanese heritage.

“I miss my country sometimes so, and I can get them here, and the only way to get it is if I make it myself. so that’s one way to, you know, just to encourage creativity in our menus to bring out like authentic flavors from where I’m from.”

Needless to say, those authentic flavors were a hit with local foodies.

“I didn’t think it was going to be that big of a deal, but when the doors open, like we sold out like in an hour and a half, two hours. and then we did it again, and then we sold out even quicker, and we made even more, and it was just like okay there’s, there’s a real demand for this sort of thing on a regular basis.” Sias says.

This past summer, the couple was able to put the pop-ups aside and open the restaurant, which is in Cleveland Heights on Taylor road.

“We kind of talked about how awesome it would be to have a vegan restaurant on the east side. …there’s nothing. there’s, really no vegan options, there are no plant-based options directly there are a few options, but they’re usually half-hearted, so they’re like salad or hummus.” Sias says.

Though small, the 25 seat eatery serves up vegan plates with big flavors. Chang says at Foodhisattva food is anything but ordinary.

“On our current menu, there’s only one salad. Everything else is not a salad. A lot of people would think that we eat salad that is just a misconception. You can eat pretty much anything. Our food is sort of unique in a way that we’re fusion. So we put something that people might be more familiar with, so like tacos. and then we fuse them with Asian flavors.” Chang says.

These made from scratch items have even consistently brought many non-vegans in the door.

Neither Chang or Sias come from a culinary background, but it was Veganism that brought the couple together, they originally met through their work at a vegan activist group which recovers imperfect grocery stores and creates meals for Cleveland’s homeless community. They bring that same spirit of food security and justice to the Foodhisattva tables. A Bodhisattva is one who is bound for enlightenment. Sias says Foodhisattva is a play on words signifying the idea that a vegan diet promotes a more compassionate way of life.

“Buddhavista stays around and helps alleviate the suffering of others with Foodhisattva; we’re trying to do that via what we feel our cuisine, but we’re doing it by just kind of helping people lessen their consumption of animal products and do less harm in the process,” Sias says.

Since their opening in June, Sias says business has been booming. They credit Veganism’s growth in popularity.

“They say that 2019 is the year of the vegan- it is so scary because you know restaurants come and go it’s a, it’s hard to run a business for sure.” Chang says.

At times the Foodhisattva four-person staff can get overwhelmed by the demand, but the couple says being busy is truly a blessing.

“Every time you see someone enjoying their food, and they make a point to tell you that it keeps it going.” Chang says.

Foodhisattva has limited hours for now. The restaurant is open Thursday through Monday.