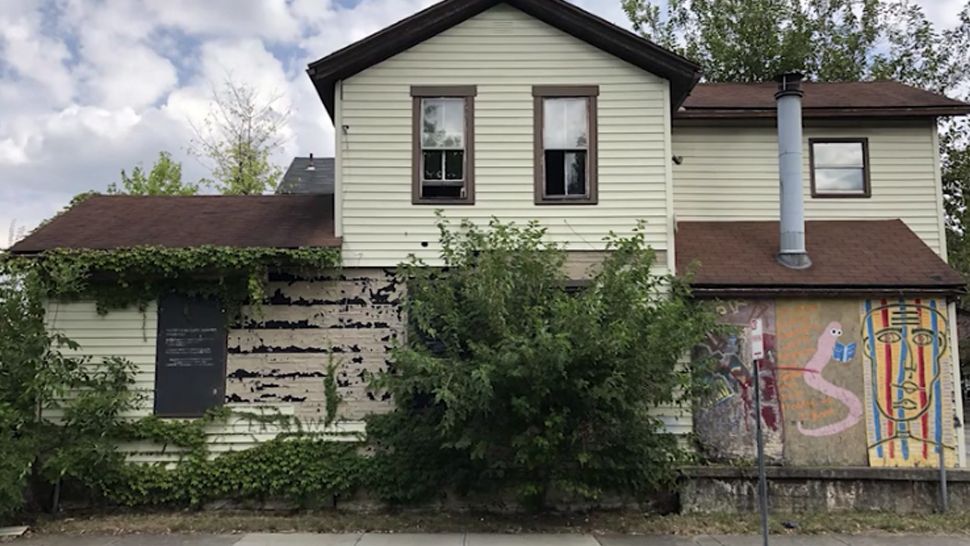 DAYTON, Ohio — In Dayton, there are thousands of vacant, blighted properties that drag down property values and quality of life for residents.

Representatives from the city described this problem as a moving target, because it’s an ever-changing landscape.

Despite the city’s efforts knocking down 2200 properties since 2013, there are still an estimated 5,000 vacant properties within Dayton’s city limits. And of those properties, 1,000 are public nuisances.

Vacant, boarded-up houses are almost as common as well-kept properties on the two-block residential stretch of Terry Street, which is just blocks from the Oregon District.

Chris Perdue is known as “The Mayor of Terry Street,” and has lived there since 1962. He has an eyesore property right across the street.

“It pisses me off,” Perdue said. “Because we got so much money in our houses, and you got a few other neighbors that take pride in their properties and we want them nice, but then you get people that move in, and tears them up. And the city lets them sit like this.”

Perdue used to own the eyesore across the street at 157 Terry, back when it was in good condition. But years ago, he sold it to a friend that didn’t care for it. Now, it’s a trash dump.

“This didn’t come from the inside, that’s still in there,” he said. “This is what people have dumped. And I wish I would catch ‘em.”

Terry isn’t the only street in Dayton dealing with this problem. It is just one example of a problem cities across the country, like Dayton, have been battling for years.

Rebecca Walsh lives two houses down from another abandoned home at 137 Terry that has been vacant for over 15 years. She said something needs to be done because it’s simply not safe.

“it’s a nuisance,” Walsh said. “I have grandchildren that come over to visit me, and I have to really watch them, because I don’t want them anywhere near this house. Vagrants come in, they leave things. You just don’t want any harm to come to your children, and with a place like this, you don’t know who’s been in there, or what’s been going on in there. It’s just a nuisance to the neighborhood.”

Carol Jahn actually purchased a blighted home on Terry Street last year, and turned around what was a rundown house. But now she lives right next door to a zombie property.

So what is the city doing about this issue? Not just on Terry, but across the Gem City.

Director of Planning and Community Development Todd Kinskey said there are more than 5,000 vacant properties around the city, based on the City’s mowing list. And a startling 1,000 of these properties are eligible for demolition.

“The city doesn’t own these buildings, okay,” Kinskey said. “I realize that neighborhoods want the city to fix it, and we just only have so much capacity to do that. I feel like the city is really doing a good job. We’ve torn down 2,200 buildings over the past six years, and it’s cost us $30 million."

He said the problem started when the housing crisis happened back in 2008-2009.

“When the housing bust occurred, essentially all those notes were called in, and people were suddenly underwater,” he said. “People were loaned more money than the properties were worth. They were bad loans to start with… and people who couldn’t pay walked away. We had a lot of empty buildings all across the city. And again, this wasn’t a Dayton, Ohio problem, this happened across the country. But during the height of the crisis, Dayton was number one. it’s not a good thing to be number one at.”

Kinskey said the city targeted neighborhoods that were considered to be tipping-points, where they had to act swiftly reestablish balance before the neighborhoods were lost.

He said the goal is to demolish 300 properties a year, but there are constraints.

“One of our constraints, which is kind of ironic, is that we have a shortage of contractors who do demolition work in the city,” Kinskey said. “And quite frankly, that is actually impacting the number of demolitions more than anything.”

Director of Housing Inspection for the City of Dayton Shauna Hill said the City’s approach, and hope, is that instead of demolishing every property, some will be purchased, rehabbed and reoccupied, because the cost to tear them down is too great.

“Especially when you factor in fire damage,” Hill said. “That almost doubles, maybe two and a half the cost of what the demolition would have been had it not been fire damaged. Because all the material has to be treated as if it has asbestos. Fire damaged properties are consistently a priority because not only are they a big blighting influence on the neighborhood because of what they look like, but also they’re less stable.”

The city prioritizes demolition based on these selection criteria:

The Montgomery County Land Bank has funded demolitions in the city since 2011, and since the implementation of the Neighborhood Improvement Program, 1,158 residential homes have been demolished.

NIP is a federally-funded residential demolition program administered in Ohio by the Ohio Housing Finance Agency.

Over the past four years NIP has received $37.5 million in funding to demolish properties in Dayton.

Montgomery Co. Land Bank Executive Director Mike Grauwelman said NIP has largely has been a success, but admits there is more to accomplish.

“In the broader picture, beyond the neighborhoods in which we’ve been operating, is there’s still blight on the landscape, I would say absolutely there is,” Grauwelman said. “There’s no question about it. And so, the problem is still there. It is still pervasive in a lot of different neighborhoods, causing weak markets, distress and depressing property values. So, there’s a lot of work still to be done.

Perdue said residents on Terry have waited long enough, and wants the city to take action.

“I just want the city to do their job of taking care of these (houses) because we shouldn’t have to put up with that,” Perdue said. “We pay a lot of money for property tax. And I tell you what, it’s unbelievable how the city lets certain areas go.”

Hill said residents’ belief that they’re not doing anything about the problem, especially on Terry Street, is simply untrue.

“We absolutely care about it,” Hill said. “We’re using every tool that we have available to us, to address all the neighborhoods, not just certain ones. But it’s a complicated, definitely time-consuming, tedious process. But we haven’t forgotten any of them.”

In 2020 NIP is ending, and in its final year of the program, the city plans to focus all of its remaining funds on demolishing residential properties in the nuisance program.