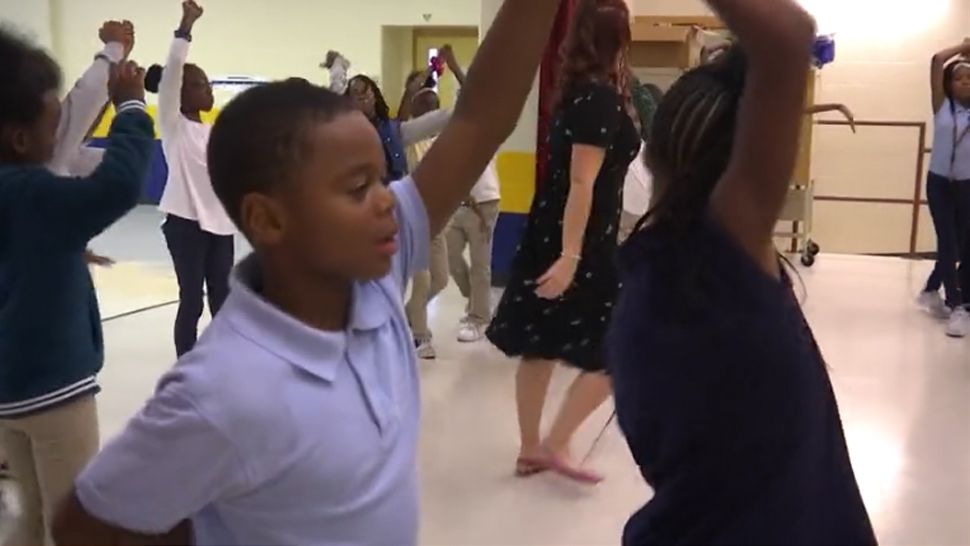 CLEVELAND, Ohio — Students at Eastwood Elementary are putting the work in on the dance floor.

Simeon Ferguson is one of the students in the Dancing Classrooms program, as is Dorian Davis, who says they’ve all come a long way.

“It was kind of like, kind of a little bit uncomfortable, but when we kept doing it,I got more comfortable with everybody,” said Davis.

That comfort level of dancing with fellow-classmates was a goal for Founding Executive Director JoJo Carcioppolo, an Ohio native who moved back to the state after working as a teaching artist for the program in New York City.

“I saw firsthand the impact that the program had on not only the students that we serve, but also just their families and the surrounding community. And so being from Northeast Ohio, I knew that the community would benefit, so it really was the reason I wanted to bring the program back here,” said Carcioppolo.

A national expansion began for the program after a documentary and movie starring Antonio Bandaras about the Dancing Classroom’s founder, hit the mainstream, leading to nationwide interest.

In Northeast Ohio, 12 years and over, 100 classrooms later, teaching artists like Tori Muellaur are teaching students the Tango and the Rumba, while also educating them on the history and origin of the dances.

But the most important lesson?

“How to respect another human being, I think a lot of the times they don’t get to interact other than recess when they’re running around and playing tag, but it’s gets them to do something they’re not used to do or used to even seeing,” said Muellaur.

And that comfort level with each other is noticeable and rewarding for the program’s founder.

“Seeing the student who walks in on day one and is shy and unsure of themselves and not wanting to do it, and then suddenly ten weeks later, they’re a brand-new human being in the way that they carry themselves, you see it trickle over in their academic performance, they’re getting along with their classmates,” said Carcioppolo.

An evolution teacher Shawn Jones sees in her students.

“I’m glad to see that they’re finally able to dance together and not think of it as a bad thing, but also thinking of it as teamwork and them working together to accomplish a goal,” said Jones, Eastwood Elementary teacher.

“Just because somebody looks a type of way, you shouldn’t not want to dance with them or shouldn’t want to exclude them out of the group,” said Davis.

Dance and life lessons —worthy of a round of applause.