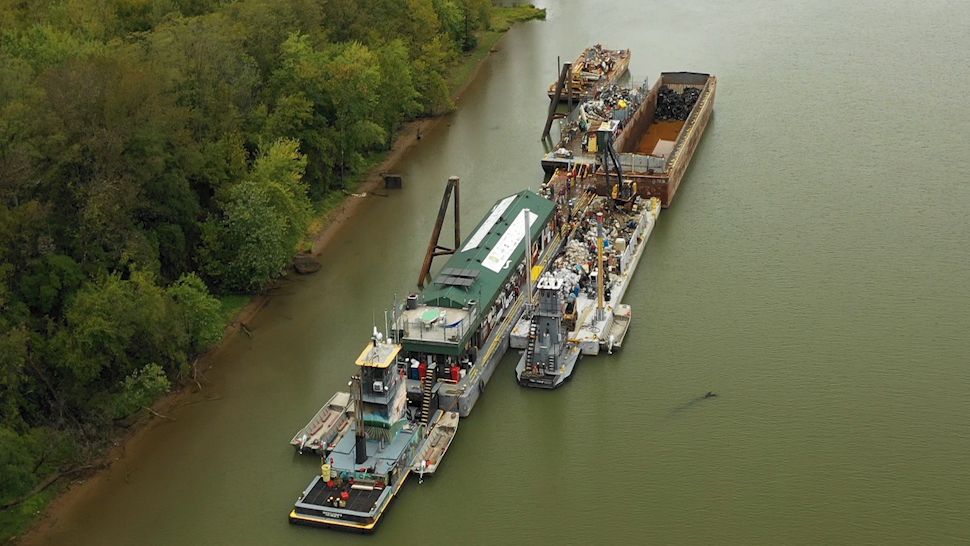 ABERDEEN, Ohio – On the Ohio River this month is the national non-profit Living Lands and Waters.

The East Moline, Illinois-based group was started in 1998 by Chad Pregracke. Since then, it has collected more than 10 million pounds of trash from 24 rivers in the U.S.

Mike Coyne-Logan is a crew member and educational facilitator for Living Lands and Waters. He's spent 13 years working on the barge.

“We've got five barges that we use to sort and collect the stuff that we pull from the river,” Coyne-Logan said. “One of those barges is also an excavator barge that allows us to get bigger items from sunken boats and cars that work their way into the river – to just stuff that's too heavy for us to get by hand.”

This month, the barge will work on a part of the Ohio River, about halfway between Cincinnati and Portsmouth.

“It's a beautiful river valley but there's a lot of trash from top to bottom. Probably as bad a river that we work is the Ohio River.”

The non-profit and its volunteers hope to collect around 70,000 pounds of trash from the Ohio River this month.

The most common garbage the group collects is single-use plastic items, barrels, and tires.

“It's shocking to see how much stuff is actually out there,” said Brian Lemoine, a volunteer on the barge. “It's really kind of opened my eyes to my purchasing habits I think more than I ever would.”

Lemoine is a project manner for In Good Company, a division of Clif Bar that organizes volunteer efforts for various companies. Lemoine is with a group of volunteers from California who are spending time on the Ohio River.

According to the Living Lands and Waters website, through its work it has pulled more than 87,000 tires form U.S. rivers, nearly 9,000 barrels, 350 televisions, 13 prosthetic limbs, 111 mattresses, and nearly 1,000 refrigerators.

Most of the items are cleaned and recycled, those that cannot are taken to a landfill. Bridgestone takes many of the barges tires and recycles them at no-cost.

“We definitely put a dent in it and we make a difference every year,” said crew-member Brady Harris. “But we've got a long ways to go.”

Harris is one of ten full-time crew members. There are also 3 part-time crew members who make up the team. The group is reliant on corporate sponsorships, individual donations, and limited government grants to operate. If the money stops, the cleanup stops.

Volunteers are essential to the operation, too. Since its inception, more than 115,000 people have volunteered with Living Lands and Waters to clean up America's rivers.

Living Lands and Waters also goes beyond river cleanup. They've planted more than 1 million trees as part of the MillionTrees Project. They have also worked to remove invasive species and hosted community cleanups.