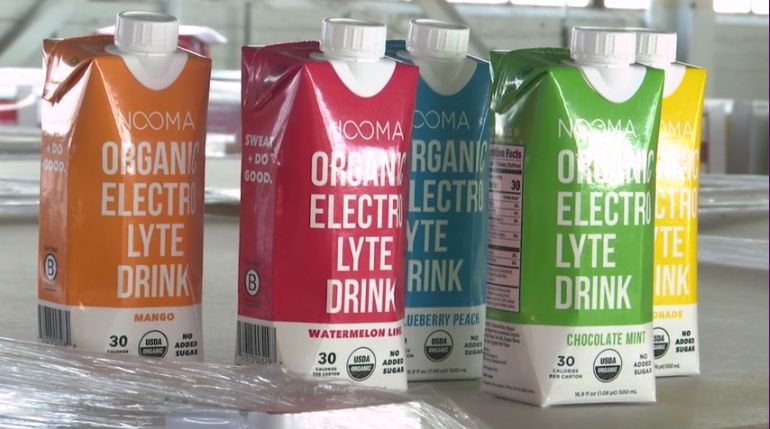 CLEVELAND, Ohio—Jarred and Brandon Smith played hockey from a young age —into college and even into the minor league.

They noticed the sports drinks they were using to refuel weren’t so good for you.

“And I realized I was getting acid reflux from them, they were giving me stomach issues Brandon was in on, hey 49 grams of sugar per bottle no matter who you are probably isn’t the best thing for you,” said Jarred, NOOMA co-creator.

While Jarred, the younger of the two, was a senior in college, he decided to try to solve the problem.

“It was… getting powdered samples sent to the hockey house, meeting with nutritionists and a ton of googling, ton of following the lead and our network, and talking to a ton of people,” said Jarred Smith.

The Smith Brothers began playing minor league hockey while developing the drink on the side.

They took their idea to Cleveland-based grocery store chain Heinen’s.”

“We went in there with a PowerPoint and some drinks that didn’t taste very good, and a half-baked idea.” said Brandon Smith, NOOMA co-creator. “And they gave us a chance, and they give tons of local food companies chances.”

They sold to gyms, yoga studios and boutique fitness centers.

And in 2017, they pitched their idea to Whole Foods.

“We went from 3 Whole Foods in the Cleveland area and a couple sporadic in our region to overnight in Whole Foods like super super quickly,” said Brandon Smith.

To the Smith brothers, they say it feels surreal.

“As we’re stocking the shelves and you see someone come and pick a mango off right in front of you it’s still just like Oh yeah! That’s right! Like you see the numbers on paper, like yes, we are selling drinks at stores, but when you actually get to see, whether it’s on social media or random occurrences like that... it’s always super cool to see,” said Jarred Smith.

Thanks @VPowerYoga for the hookup with @drinkNOOMA after our #JBADYoga session today! Always needed in the middle of the week. pic.twitter.com/LwPhOlGjjT

But they say they aren’t done yet.

“We have had some really cool wins but we still see ourselves in... maybe in the second inning now... there’s such a long way to go,” said Brandon Smith.

Jarred and Brandon say they have some more ideas up their sleeves, and hope to launch some of them by the end of the year.